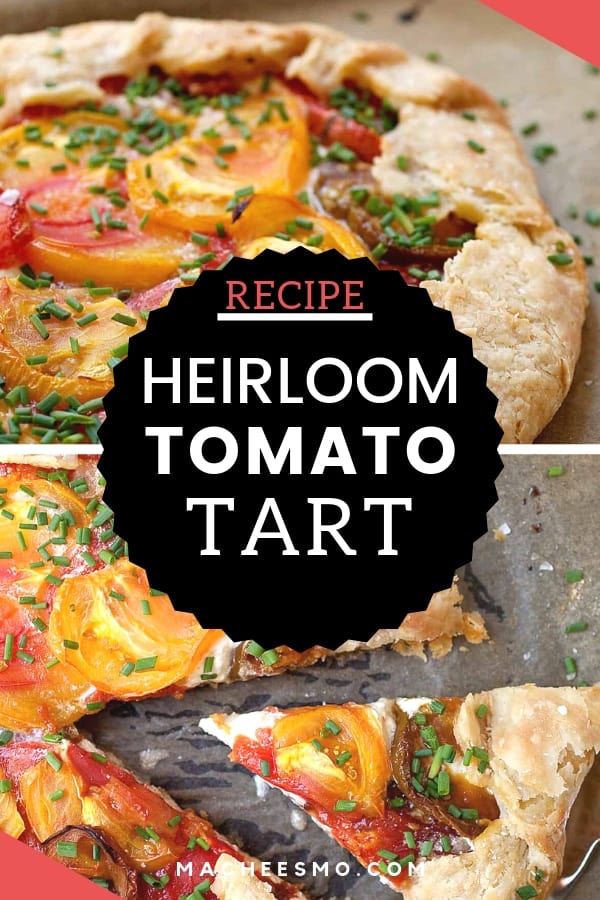 This time of year, I just buy all of the tomatoes. They are so perfect – ripe, juicy, and readily available. I can’t help myself. When I see them piled up in a market, I get more than I need.

Sometimes I’ll make a lunch out of the tomatoes with a sprinkle of salt and drizzle of olive oil. A few times a season, without fail, I’ll have more than I know what to do with. Not a bad problem to have!

If you’re going to cook tomatoes, this heirloom tomato and ricotta tart is about as good as it gets. It has just a few ingredients and nothing to mask the sweetness of the fresh tomatoes. The whole thing is wrapped in flaky butter crust.

It has elements that reminded me of good, fresh pizza crossed with the best pie crust. So yea… a good use of tomatoes, for sure.

1) For tart dough, stir together flour and salt in a medium bowl. Cube cold Land O Lakes® Unsalted Butter and cut into the flour mixture using a pastry cutter or your clean hands. Mix until the butter is in pea-sized chunks. Then add water by the tablespoon until the dough is shaggy and just barely sticks together.

3) Preheat oven to 400 degrees F. Slice tomatoes into 1/2-inch slices and place them in a colander. Season with a sprinkle of kosher salt and let drain for 10 minutes.

4) Remove dough from fridge and roll out into about a 14-inch round. It doesn’t have to be exact. Transfer dough to a baking sheet lined with parchment paper and drizzle dough with olive oil.

5) Spread ricotta cheese over dough. Leave about two inches of room around the outside so you can fold the dough over. Dot cheese with thinly sliced garlic and top the whole thing with sliced and salted tomatoes. The tomatoes should overlap heavily, but be in a single layer.

6) Sprinkle tart with salt and pepper and bake for 50 minutes at 400 degrees F. Rotate tart once halfway through to ensure even cooking.

7) Remove tart and let rest for 10 minutes. Then garnish with fresh chives, slice, and serve.

The nice thing about this recipe is it doesn’t have many ingredients. The focus is on the quality of each of the ingredients. Buy good tomatoes, and good whole milk ricotta cheese.

Also, take the time to make the crust from scratch. It really only takes a few minutes and makes a big difference.

Because we will salt the tomatoes later for the filling, it’s important to use unsalted butter for the crust.

Start the crust by stirring together the flour and salt and then cut in the cubed cold butter until it’s in pea-sized pieces.

After that, stir in the ice water by the tablespoon. The dough should be a bit shaggy. If you press it together it should stick, but just barely.

Scoop the dough out onto a clean surface and fold it over itself a few times to form a loose ball. Wrap it tightly and plastic and store it in the fridge for at least 30 minutes.

You know you did it right if you can see chunks of butter in the dough!

I like to use a variety of colors for my tart, but that’s not essential obviously. It’s more important to use the best tomatoes you can find.

The most important part of this recipe is to salt and drain the tomatoes. Tomatoes are basically water balloons and if you just slice them and stick them in the tart the filling will end up very watery.

So slice the tomatoes and line a colander with them. Then salt them with a sprinkle of salt and let them rest for about 10-15 minutes. That will pull out a bunch of water.

When you’re ready to make the tart, roll your dough out into about a 14-inch round. It doesn’t have to be perfect. It’s kind of a freeform tart situation, after all.

Then drizzle the dough with olive oil and spread it with ricotta cheese. Leave about a 2 inch border around the edges so you can fold the dough over later.

Then add some slivered garlic to the cheese and top everything with tomatoes!

Carefully fold the dough edges over the top and sprinkle it with a little salt and pepper.

This guy is ready for the oven!

Bake the tart at 400 degrees F. for about 50 minutes. Rotate it once halfway through to make sure it’s cooking evenly. 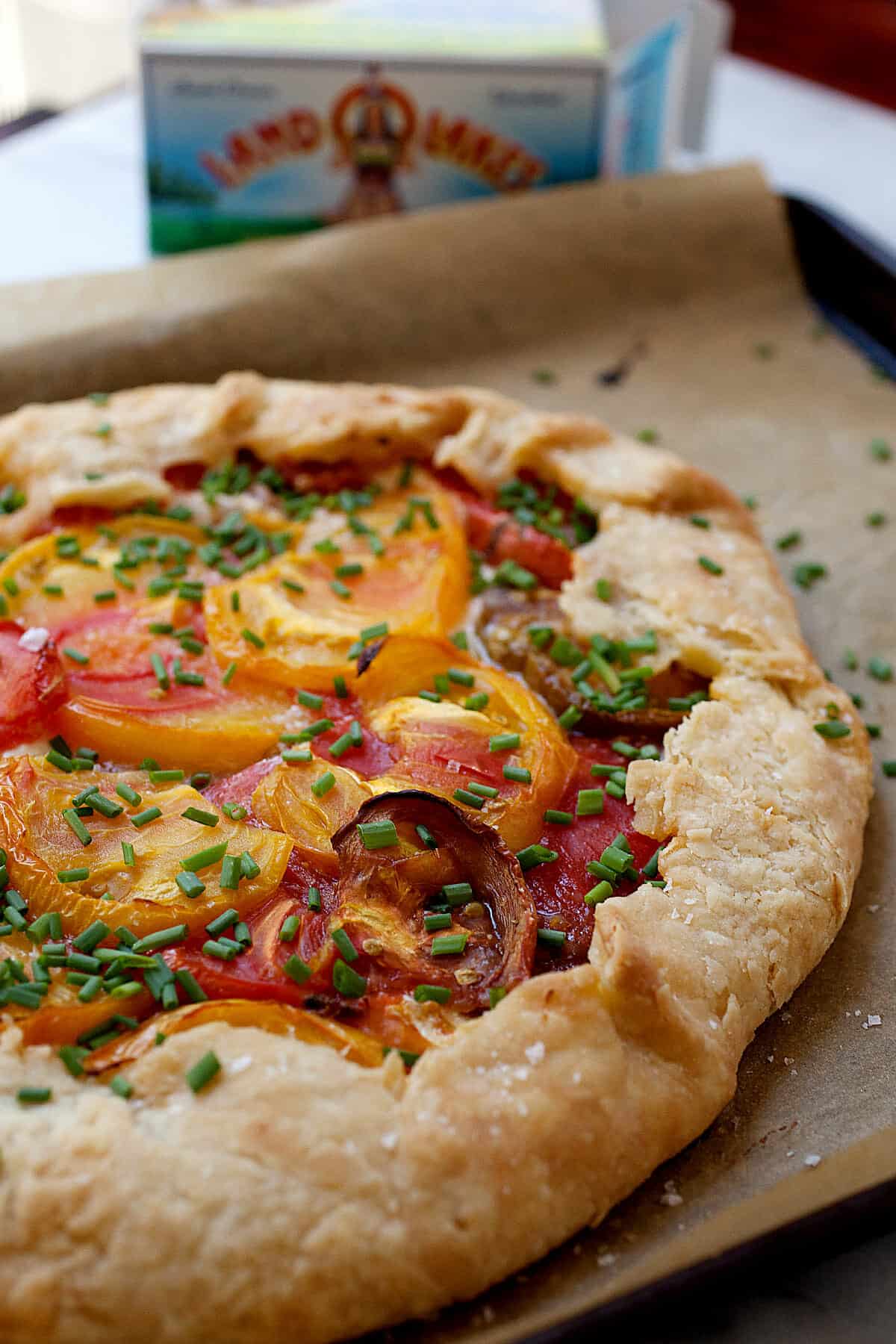 Garnish the finished heirloom tomato tart with a big handful of fresh chives and you’re ready to eat! 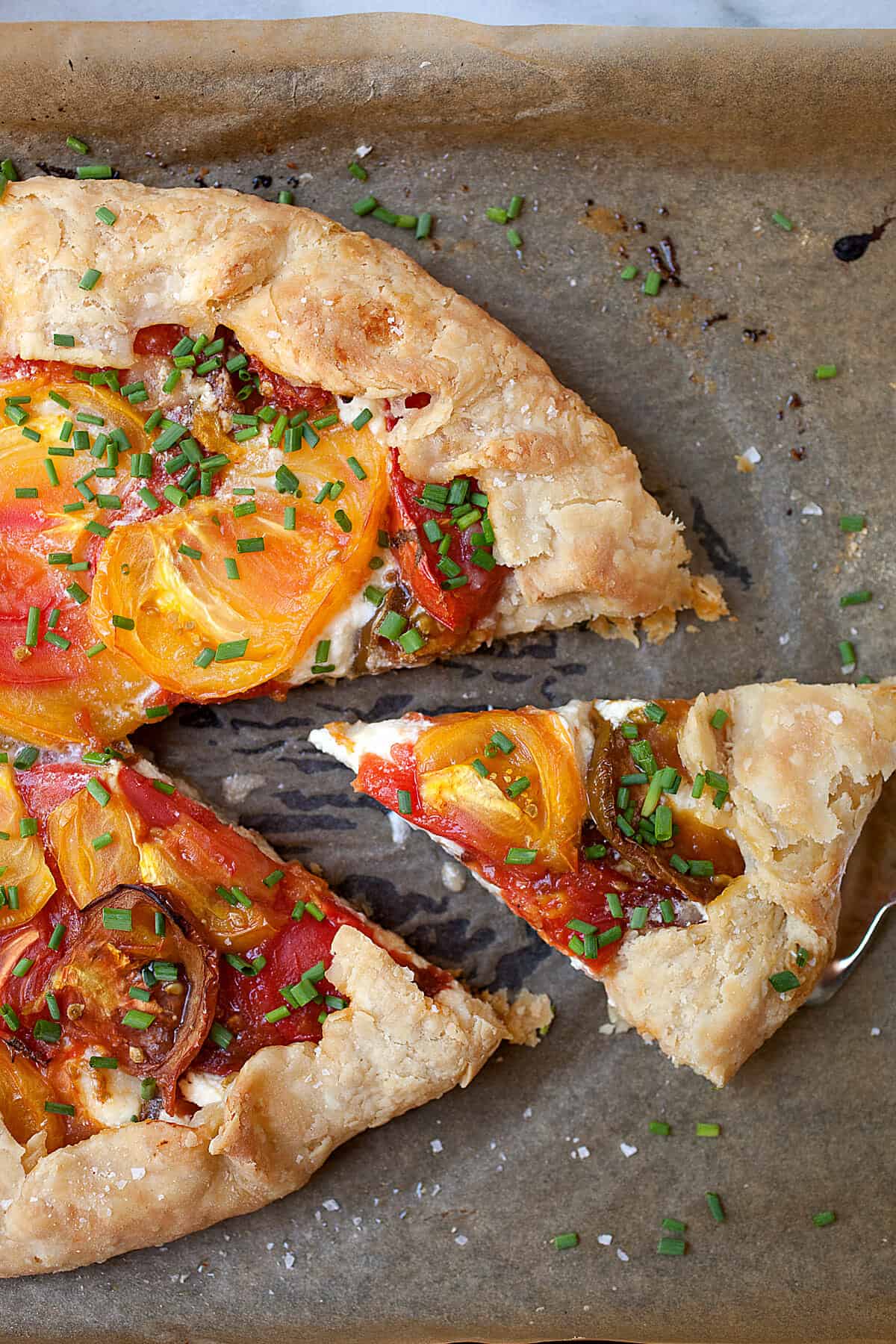