I’ll be honest, I’m a beer guy. The first time I tried Angry Orchard hard cider was actually because a guest brought a boat load of it to a summer BBQ we were hosting. Turns out it’s naturally gluten-free so it’s a great alternative to beer if you have a gluten issue.

I ended up with a few six packs of it in my fridge and cracked one open one day to discover… HEY! This stuff is pretty darn good! It did not go to waste!

One thing that I really love about hard cider is that it’s very versatile and makes for a great ingredient for cooking and cocktails. It has a subtle sweetness and crisp apple flavor that goes well in a ton of recipes. On the cocktail side, The Angry Balls cocktail, which includes Angry Orchard Crisp Apple and Fireball Whisky is a great balance of sweet and spicy and gave me the inspiration to whip up a delicious recipe with the same flavors. Since it’s the holiday season, I thought I’d try it out in a classic holiday dessert with a hard cider twist!

This white peppermint fudge is really easy to make. The trick is to reduce the cider so it has a more concentrated flavor! For the topper I drizzled on a quick caramel sauce laced with Fireball Whisky. YUM.

This fudge is also gluten-free so it’s great for gluten-sensitive guests!

This easy holiday fudge starts with reduced Angry Orchard Hard Cider. Plus, I like to top mine with a drizzle of Fireball Whisky caramel! It’s also gluten-free if you are gluten sensitive!

1) Add sugar, water, and light corn syrup to a medium pot over medium heat. Stir together and then let simmer. Don’t stir the sugar as it cooks. Cook it for 5-6 minutes until the sugar turns an amber color.

2) Swirl sugar around and add butter in cubes. Stir butter in until the sauce is well combined.

3) Let the sauce cool for a few minutes and then stir in the cream and Fireball whisky.

4) Sauce is best if you cool it in the fridge until it’s at room temperature.

1) Add Angry Orchard Crisp Apple to a pot and simmer until the cider is reduced until it measures 1/3 cup.

3) Line an 8×8 baking dish with foil and spray it with nonstick spray.

5) Let fudge set in the fridge for at least 2 hours. Then remove from foil and slice into 16 even pieces. Drizzle with caramel sauce!

Angry Orchard makes many varieties of hard cider, but I like their Crisp Apple variety for a fudge like this.

The key to using it in this recipe is to reduce it down in a small pot until it measures about 1/3 cup. That’ll take 10-15 minutes of simmering over medium-low heat.

Then just pour that over the chocolate and sweetened condensed milk. Mix it together in a microwave safe bowl because the heat from the reduced cider will not be enough to completely melt the chocolate.

Microwave the mixture in 30 second bursts, stirring between each burst, on high heat until it’s smooth and creamy.

Then stir in the crushed peppermint (I used candy canes) and transfer the fudge mixture to an 8×8 baking dish lined with foil and sprayed very lightly with nonstick spray.

Let that chill for at least 2 hours and it should set up perfectly. (I like to make mine the night before so it has plenty of time to chill.)

This is my standard homemade caramel sauce recipe with a big glug of Fireball whisky mixed in.

Cook that over medium-low heat with minimal stirring until the sugar dissolves and the mixture turns an amber color. Then add the butter. This will hiss and bubble like crazy.

Once the butter is stirred in, remove the caramel sauce from the heat and stir in the cream and Fireball!

Let the caramel cool in the fridge until it’s at room temp. That’ll be perfect drizzling texture. If it chills too much, it’ll turn really hard and you can loosen it by letting it come to room temperature for a few minutes.

Cut the fudge into small squares and drizzle on the sauce! 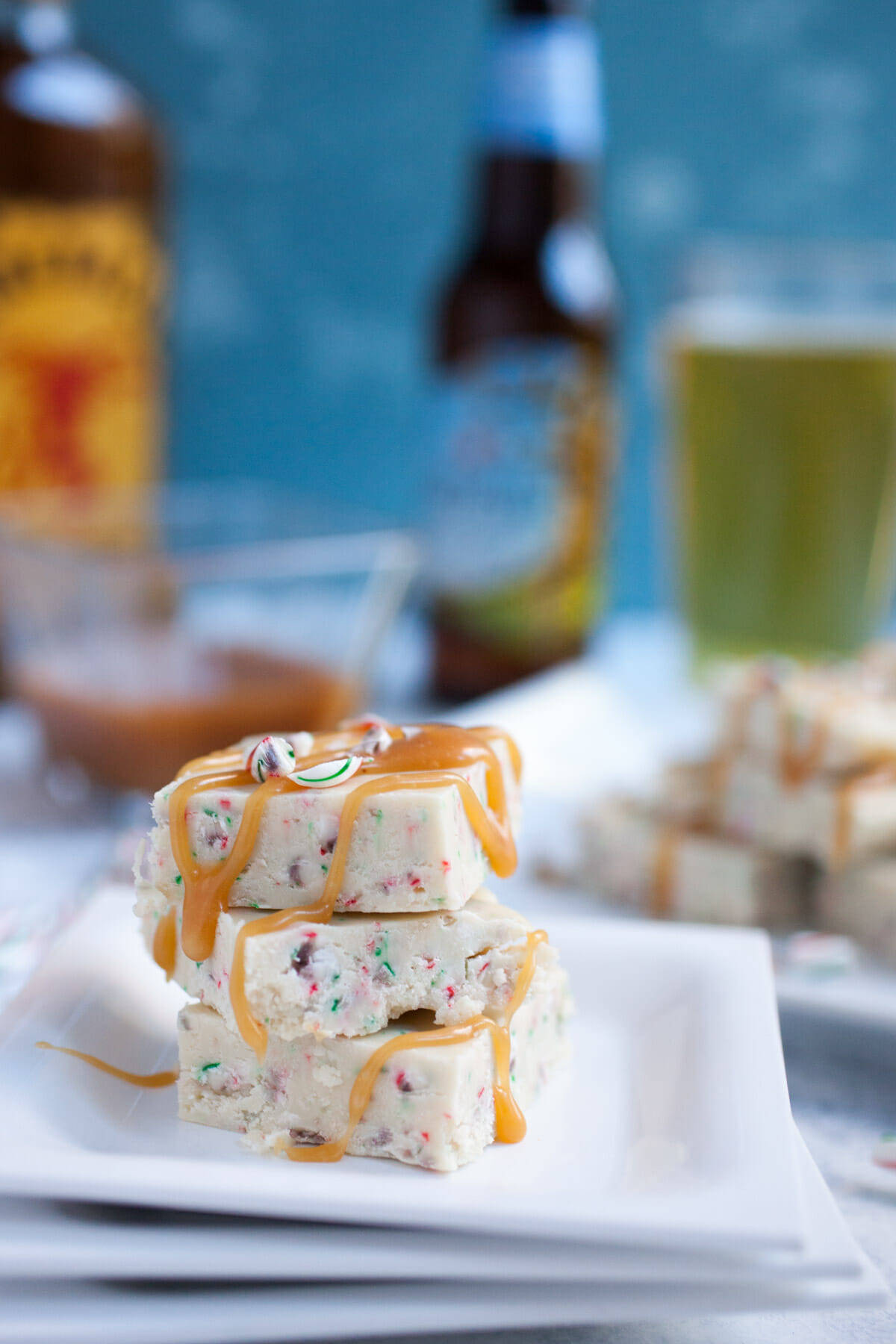 This white peppermint fudge has such classic holiday flavors with a nice hard cider twist. If you’re up for a new fudge flavor, try this recipe out! 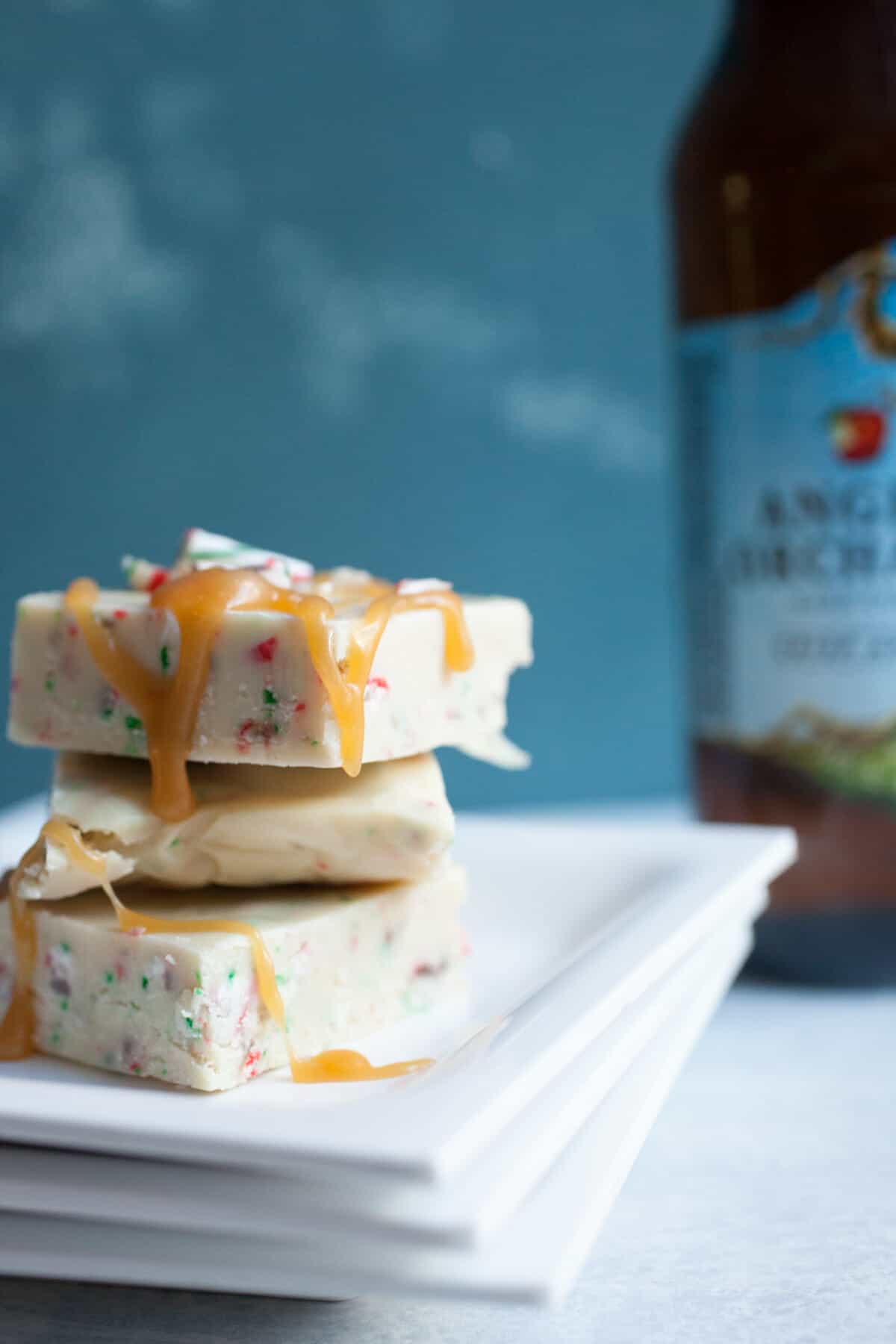