Let me start off by saying that this guess the food is really hard.  I think it may be one of the harder ones I’ve ever done.

That said, I’m sure someone will get it before lunch.

Anyway, the reason that this “food” caught my eye was because it was plastered with huge labels about how it was “Sugar Free.”  I don’t think that I’m giving away too much by saying that this is clearly a candy of some sort so the fact that it’s “Sugar free” is kind of baffling to me.

It’s plenty sweet after all so where’s that sweetness coming from?

It turns out that it’s a fancy little chemistry trick that’s used often in sugar free foods that I’ve never really talked about before in a guess the food.

As you can see, there’s a nice explanation in tiny print on the packaging about where the sweetness comes from.

There are a huge list of these sugar alcohols that food manufacturers can use in place of sucrose which is what is typically used when sugar is in the food.  The benefits of using sugar alcohols are a few:

Of course, these benefits come with a list of disadvantages.

So you maybe save a few calories and won’t see your blood sugar spike, but the candy might not taste great and you’ll be super-farty.
Pick your poison I guess. 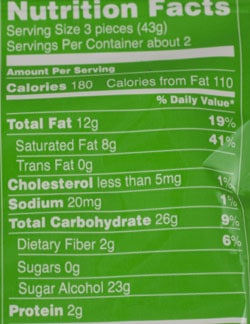 As you can see from the nutritional facts, just because something is sugar free does not mean that it’s calorie free.

Most of the calories in this food are coming from fat though, not the carbohydrates.

This is a candy after all so I don’t expect to see a super-healthy nutritional facts list.

The only thing I’ll point out is that if you were to eat a whole bag of these (not hard) then you would get over 80% of your recommended daily saturated fat intake.  That’s pretty substantial.

The key thing to remember about foods like this is that while they are sugar free, that doesn’t mean they are completely free.

Ok.  Onto the ingredient list.  Maybe there will be some hints here to help you guess the food!  While there are a lot of sub-ingredients, there are really only five things in this food.

Dark Chocolate – Dark chocolate sounds good and is actually considered to be a pretty healthy chocolate.  I wouldn’t consider this a great dark chocolate though.  They use an artificial vanilla flavor instead of natural vanilla for starters.  Maltitol, which is the first ingredient in this dark chocolate is another sugar alcohol sweetener.

Pastel Coating –  I don’t want to trick you guys here.  This is not a pastel colored food.  I think this is actually the filling for this candy.  I’m not sure why it’s called a coating, but it seems like it’s an emulsified, fatty mixture.  It has some milk in it and that fake vanilla stuff again.  Plus there’s more Maltitol!  Plenty of Maltitol to go around!

Maltitol Syrup –  Just straight up maltitol!  Interestingly, in other countries there has to be a warning on stuff with maltitol about a possible laxative effect.  Not true in the US.  Generally though, if you eat more than 100 grams of maltitol in one day, you might not want to go on an extended road trip.

Sorbitol – More sugar alcohol for you with pretty much the same list of disadvantages as Maltitol.

Peppermint Oil – Definitely the most pronounced flavor in this candy in my opinion.  Straight up peppermint.  Good for the holidays!

Of course, I did try one of these candies and I must say that I thought it tasted fine.  It tasted pretty much like its sugar counterpart, but I thought it was not quite as sweet.

Personally though, I’m way more concerned with a “laxative effect” than I am about a few extra calories.

That’s not really the issue though.  The issue is…

Can you Guess the Food?

25 Responses to “Guess the Food: Sugar Free!” Leave a comment