I haven’t done a Guess the Food in a while so I thought I’d try yet again to stump you guys.

I usually fail at this, of course.

This guess the food has all the good stuff that you’ve hopefully come to expect from this series:  Strange ingredients, an unexplainable use of high fructose corn syrup, and very little actual nutritional value.

But, if there’s one thing that I’d like to focus on for this Guess the Food it’s this:

Case in point:  This guess the food.  If you were to take away a few things, you’d be left with basically a big bag of salt here. 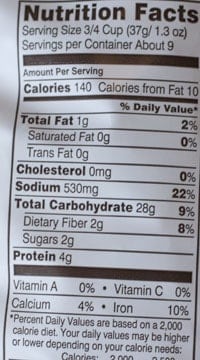 There’s really very little to this “food” when you look at the nutritional panel.

The first thing I’ll point out is the serving size.  I can almost guarantee that most people eat more than 3/4 of a cup of this, but I’ve never really been able to determine how manufacturers determine what, exactly, is considered a serving size.

I actually thought this food would have more calories in it.  Guaranteed though that when people are eating this, they aren’t counting calories.

There’s very little fat and no cholesterol in this food.  It’s basically a big block of salty carbs.

But, what’s really concerning about this food is the sodium.  At almost a quarter of your recommended daily amount of sodium, this product is salty.

Make no mistake.  This product isn’t tasty because it uses quality ingredients or amazing spices and herbs.

It tastes good because it’s salty. 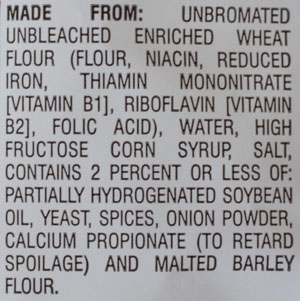 There’s actually not that many ingredients in this food in the grand scheme of things.  I thought there would be more frankly.

Let’s go through them though!

Unbromated Unbleached Enriched Wheat Flour – The fact that this flour is unbromated and unbleached is very good.  Both of those processes are kind of ridiculous and unnecessary in my opinion.  At the end of the day though, this flour is still not healthy.  Don’t get it confused with WHOLE WHEAT flour.  It’s not.  It’s just normal flour that has had all the natural nutrients stripped out of it and then some nutrients added back in.

Water – Good old H2O as the second ingredient.  Lots of water in this I guess…

High Fructose Corn Syrup – Listed as the third ingredient there’s a fair amount of this in the product.  I have no idea why.  I make this product from scratch at least once a year and I never put sugar in it.  I’m at a loss as to why they feel like they need this.

Salt – Obviously lots of salt in this stuff.

Soybean Oil – Pretty generic oil made from soybeans.  I think this probably helps with browning the product at some stage in the production process.

Yeast – If you need something to rise at some point, this helps!

Spices – About as generic as you can get.  Who knows what kind of spices are includes.

Onion Powder – Funnily, I consider this a spice so they could’ve just lumped it in with “spices” in my opinion.  What do I know though?

Calcium Propionate (to retard spoilage) – A preservative that’s used often in breads to keep them from spoiling.  This is the reason why your homemade bread will spoil way before most bread products on the grocery shelves.

Malted Barley Flour – This is a dough conditioner that’s added to most flours in the US actually.  It makes that dough really fluffy.

That’s all there is to this thing.  It’s basically flour, water, HFCS, and salt and will set you back a solid $3.

The real question, of course, is if you can guess the “food”?

29 Responses to “Guess The Food: Salt Bag” Leave a comment