It has been a bit since I’ve done a Guess the Food so I thought I would bring it back in the new year with a “food” that is almost certainly healthy.

Just look at all of these amazing claims! How could it not be good for you?!

As you might guess, anytime you see bright bold claims on “food” it’s probably not a lie but it’s definitely not the whole story.

Let’s dig into some of the nutritional facts and ingredients here and see if you guys can guess the “food”! 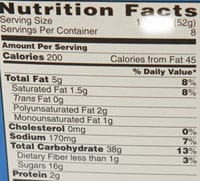 There’s not much going on in this thing nutritionally. It has some fat and salt, but it’s mostly sugar. In fact, 30% of each serving is sugar by weight. It’s not that 16 grams of sugar is a huge amount of sugar, it’s just that the serving size here is pretty small. The sugar content in 8 ounces of Coke is almost twice as much as the sugar content of a serving of this “food.”

But let’s take a step back and check out some of the above claims:

Good Source of Vitamins! To be a “good source” of vitamins according to the FDA you just need to provide 10% of the daily recommended value of those vitamins. So this food provides a whopping 10% of the daily recommended supply of Vitamin A, for example.  You know how you could also get that much vitamin A? Eat a single leaf of spinach. Done. (source)

Baked with Real Fruit* Anytime you see an asterisk next to a phrase, watch out. It’s probably not good. If you hunt down the asterisk explanation in this case it says, “Made with Equal to 10% Fruit.” I have no idea what the hell that means. As you’ll see in the ingredients though, there is less fruit in this thing than salt (by weight). In other words, it’s not very much fruit. 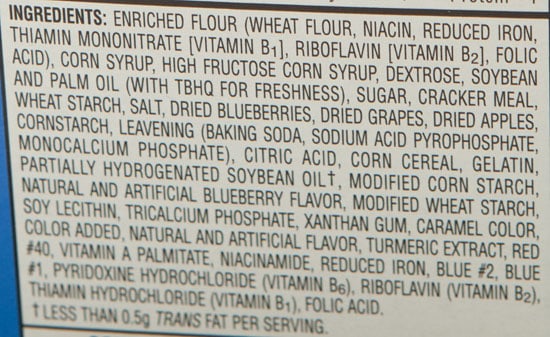 Holy hell that’s a lot of stuff! Let’s not go through all of them because I don’t want to write a novel here.

Let’s do some highlights:

Enriched Flour – As I’ve said many times on these posts, enriched flour isn’t enriched with anything. They take normal flour, strip out all the good stuff to make for a longer shelf-life and then add back some nutrients, therefore enriching it. Fantastic.

Corn syrup, high fructose corn syrup, dextrose – These are all various sugar products that are in pretty much everything found in a box in the store.

Oils with TBHQ for freshness – This TBHQ stuff is in a lot of very processed foods. It is tert-Butylhydroquinone. Say that tens time fast! It’s a preservative that has some skeptical at best lab results and some reports have said it could be carcinogenic. It’s generally deemed safe in super-small doses though.

Dried Blueberries, Apples, Grapes – Here’s that fruit! Notice that it comes after salt in the ingredients list which means, by weight, there is more salt than these things.

Partially Hydrogenated Soybean Oil* – Another thing with an asterisk, or a cross I guess. This is basically solid oil and is a lead provider of trans fats which have all sorts of negative health effects. In fact, trans fats are restricted in many countries and some states. They keep the amount under .5g per serving though so they can round down on the nutritional panel and say it has ZERO grams.

Soy Lecithin – This has to be one of the most common food additives. It’s in everything and seems fairly harmless. It’s basically an emulsifier and thickener.

At the very end of the ingredients list you can see where they add in all those special vitamins so they can slap meaningless phrases on the front of the box.

OK. So I’m obviously not a huge fan of this “food” even though I’ve eaten my fair share of it in my lifetime.

The question, of course, is if you can GUESS THE FOOD? LEAVE A COMMENT!

23 Responses to “Guess the Food: Real Fruit!” Leave a comment