If there’s one thing I’ve learned by doing over a dozen Guess The Foods here on Macheesmo is that there are very few times in the processed food world that you get something for nothing.

If a particular food is really tasty there’s most likely a price to pay.  Sometimes it’s hard to find that price though.  Companies are genius at hiding product information.  Actually, they don’t hide it necessarily because they can’t legally hide it.  But what they can do is make it hard to find through all the other positive things they promote with that product.

This guess the food is a perfect example of this.  I can’t imagine that anyone in the world would say this food is healthy or good for you in any way.  And yet, right on the box the company has printed in huge letters:

I cut off the second part of the phrase because it says what the food is, but you get the idea.  The point is that they are capitalizing on the idea that fat equals unhealthy which is far from true.  But I guarantee you this works and people buy and eat boxes of these guilt free because HEY.  IT’S FAT FREE!

Of course, to get down to the real facts, we have to turn the box over – a step that I would really encourage more people to start doing.  That’s the only way to see through the haze and find out what’s going on.

Oh… it might also give you some clues so you can guess the food! 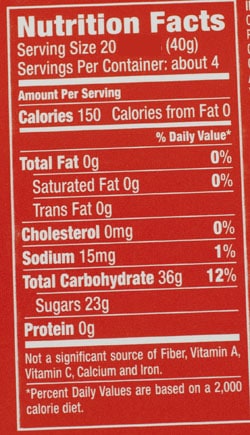 Well, I guess the front of the package was technically correct.  According to the nutritional facts, these small little things (20 per serving) have exactly zero fat in them.

It turns out that is because they are literally 90% carbohydrates.  A serving is 40 grams and 36 of those grams is carbs.  Most of the carbs is straight from sugar and who knows what the other 13 grams are.

So sure, there’s no fat in this stuff, but there’s enough sugar to give you a head start in the diabetes race.  Eating the whole box, which I promise is easy and most people probably do, will wallop you with 600 calories and almost 50% of your daily recommended carbs – most of it coming from sugar.

Fat free?  Sure.  But far from healthy.

I guess what bugs me about this is that the company even tries to make their product sound healthy.  Just let it be.  If people eat it then fine, but if people eat it because you’ve disillusioned them in some way, then that’s on you.

End rant!  Let’s try to figure out what these suckers are.

This ingredient list kind of confused me because I couldn’t really match any ingredient up with the major flavors of this thing.  See if you can do it!

Sugar – Well, no surprises on this one.  Whatever this thing is, it’s almost all sugar.

Corn Syrup – Oh.  And corn syrup.  I have a feeling that this is used mainly for a texture thing in this case, not necessarily for the sweetness.  Although that never hurts.

Modified Food Starch – This stuff is basically a thickener.  It’s the reason your boxed macaroni and cheese sauce thickens for example.  It also probably accounts for most of the carbs that aren’t sugar in the nutritional info.

And we are already into the less than .5% ingredient list.  So this thing is 95.5% sugar, corn syrup, and thickener.

Pear Juice from Concentrate – This was a fascinating ingredient.  I’d love to taste this product without this just to see what it adds.  I never would’ve guessed this has pear juice in it.

Sodium Citrate – This is pretty crappy labeling because I think they mean Trisodium citrate which is a popular food additive.  It gives foods and beverages a mildly tart, acidic flavor.  Think about the mild tartness of RockStar or Red Bull.  That comes from Trisodium citrate.

Pectin – This stuff is a pretty common thickener that can be derived naturally from fruits.  It’s very common in jams and jellies.

Citric Acid – A very common acid that’s found a lot in soft drinks to give them a slight sour flavor.  Lemon and lime soft drinks, for example, have a lot of this.

Malic Acid – Lots of acids going on in this thing!  This stuff is really sour.  It can be found naturally, but is concentrated I think to give foods a very sour flavor.

Fumaric Acid – This was a new one for me.  As far as I can tell, this is another acid that gives food a slightly fruit-like taste.  Interesting.

Confectioners Glaze – This is pretty cool stuff (read: weird).  It gives products a nice shellacked appearance.  It is also derived from insects!

Carnauba Wax – This stuff appears to have a huge variety of uses in the food world, but I think in this instance it is used as a coating.

White Mineral Oil – Just normal old mineral oil which, if you didn’t know, is a derivative of the petroleum process.  It’s used in a ton of things, but for foods it’s used to make things glossy.

Artificial Flavors – The most generic ingredient ever.  I really wish manufacturers had to list what flavorings they are using.

Artificial Color – The second most generic item ever.  What I’m always confused by is that they say artificial color, but then go on to list colors.  So this is in addition to the other colors listed…

Magnesium Hydroxide – Pretty common as a laxative.  No idea what it does in this food.  Maybe the manufacturer is just playing a mean joke on people?

Assorted Colors – There’s a bunch of random colors listed.  This was very confusing to me, but what do I know about making food?  I cook food.

I’m not sure how hard this one will be.  Hopefully, it will take at least until lunch time for someone to get it (unlikely).  Hopefully the pear juice will throw you for a loop!

37 Responses to “Guess the Food: Fat Free!” Leave a comment