Ever since I’ve started doing the Guess The Food series, I continue to be baffled by the sheer number of ingredients in some foods. Sometimes it seems like food producers make things so much harder than they should be.

In reality, of course, they are making things easier, cheaper, and more consistent, but is that always a good thing? What if it means making a 4 ingredient thing like ice cream into a 12 ingredient thing.

What if it means that food will now have more preservatives, chemicals, and things you simply can’t pronounce?

That’s the story with today’s guessing game which was submitted by a lovely reader and fellow blogger.

The question for this post is at what point do you say enough is enough?

If, as in this case, something has around 25 ingredients for what should be maybe 8, is that a bad thing? Does it bother you?

I’m getting ahead of myself though. We need to check out the nutritional info also! 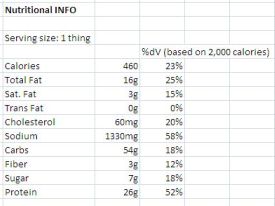 I wasn’t able to snap a photo of this nutritional info so I just pulled the stats off their website.

As you can see, there’s plenty of stuff in whatever this food is. In other words, it’s not intended to be eaten as a snack. It’s a high calorie, high fat, really high sodium, item.

It does have a good amount of protein which is good thing and you’ll see why once we get to the ingredients.

The important thing to know about this “food” is that people do not normally eat it alone. It almost always accompanied with a few other things.

I’m not going to tell you what those things are, but rest assured that they aren’t celery and water.

I think this nutritional panel speaks for itself. Sadly, it’s very far from the most unhealthy thing this company makes.

Let’s get on to the good stuff:

Again, I just copied these from their website rather than taking a photo. Here’s the rather lengthy list of ingredients.

Chicken Breast: You probably know what this is. This is where our protein is coming from!

The next ingredient is listed, vaguely, as Seasoning, but let’s break down some of the more interesting things in the seasoning.

Sodium Phosphate (3 kinds): It’s basically a salt for meat preservation. Strangely it’s also used to empty the colon prior to a colonoscopy. I’m sure these are subtly different kinds though. The Glassy Sodium Phosphate was interesting to me. There’s a ton of it made every year in the US and very little study on its environmental or healthy consequences.

Extractives of Paprika and Turmeric: Extractives are commonly used food flavorings. By extracting the spice flavors they eliminate all the other stuff in spices that could lead to spoilage or differences in flavor. Using extractives allows them to use less and make sure that it tastes the same every single time.

The next list of ingredients is for the breading (big hint).

Wheat Flour: I was blown away to see that they use real wheat flour rather than enriched flour. This doesn’t mean that it’s whole wheat flour though.

Spice: Most generic ingredient ever. They should just say stuff.

Gum Arabic: A fairly natural ingredient used most frequently as a stabilizer.


Egg White Solids: These are basically processed and dried eggs that give egg qualities to dishes without the risk of using real eggs. They never really spoil which freaks me out, but I guess is a good thing.

Yellow Corn Flour: Good old corn meal. My guess is that they use this for texture.

Toss in a bit more paprika extractive and you’re ready to go!

They go a step further and say what they cook these things in which is basically a number of different oils and a preservative.

The thing that caught my eye and also the eye of the person who submitted this “food” was the dimethylpolysiloxane. It says in parenthesis that this an “Anti-foaming agent”, but that begs the question… why the heck do you need an anti-foaming agent?

It’s no secret probably that this is fried at some point since all the oil is listed. I’ve fried hundreds of things in my day and I’ve never had a foaming problem. Nevertheless, it’s very commonly used when frying and also cited as being used in a number of food production processes.

The chemical itself is a silicone based thing that’s used in a huge number of products, including Silly Putty as reported by this SF Gate article.

Am I saying that this food contains silly putty? No. Depending on how it’s processed, it takes on different forms. In fact, there’s been no known link between this anti-foaming agent and any sort of negative health issues.

But, at the end of the day, I have to ask: Is it necessary?

Could we maybe just deal with a bit of foam?

It’s a long list of ingredients and there are no helpful pictures of a box to help you. That said, there’s a ton of clues so I think you might be able to nail it.

Can you guess the food???

17 Responses to “Guess The Food: Bonus Ingredients!” Leave a comment