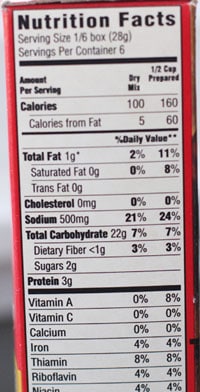 Even though I’ve done almost a dozen of these Guess The Food posts, I’m still amazed at some of the stuff companies hide in their products. If I could change one thing about people’s buying habits, it would just be to encourage people to read labels while they shop.

That’s the point of this series after all.

I still learn something new every time I wonder down the aisles and turn over a box or two.

I’m hoping that this one is a bit harder since you guys have nailed the last few without any problem at all. Hopefully, this one will keep you thinking until lunch time at least!

As tends to be the case, this “food” has a lot of stuff in it, so let’s get down to it.

Well, I’m giving you some hints by showing the full nutritional panel. Clearly you can see that this is a dry mix of some sort but you’d all be able to tell that from the ingredients anyway.

There’s not a lot going on in this “food.” It doesn’t have many calories or fat. It looks like it consists mainly of Carbs and salt which is pretty par for the course for most processed foods these days.

I thought the serving size was really interesting for this product: “1/6 box.” How the heck are you supposed to measure that? That means you’d have to measure the entire box and then do some math. Sure, they give you the grams, but who weights their processed foods before preparing them?

Why don’t they just tell you the number of cups that’s in a serving? I thought about this and the only realistic answer I could come up with is that they want you to make and eat the whole box, which most people probably do, so they make the serving size harder to understand.

I can tell you that, without a doubt, my homemade version of this dish would have more fat, way less salt, and way more fiber.

Not much else going on here though so let’s move into the ingredient list where there’s lots of stuff going on!

The list was disappointing just because there’s some stuff in here that I don’t understand. Let’s get into it though and I think you’ll see what I mean. Hopefully, you’ll get some clues from this list so you can Guess The Food.

Enriched Wheat Flour – One of the most common ingredients in processed foods. Keep in mind that even though the word wheat is in the title, this is definitely not whole wheat. They basically rip out all the natural qualities of flour through processing (so it has a long shelf life) and then add in a few vitamins. Hence, enriched.

Degermed Yellow Corn Meal – This is just ground corn that’s had most of the germ and outer hull removed. It’s not quite as nutritious as stone ground corn meal, but it’s still relatively high in fiber.

High Fructose Corn Syrup – The fact that this is the third ingredient in the list is mind boggling to me. It almost makes this a kind of candy. I never would’ve thought to see this in this list and definitely was shocked to see it so high!

As I’ve always said, my beef with HFCS is that it’s hidden in tons of stuff. I just hate to see it in products that, as far as I can tell, could be better without it.

Salt – Good old salt! There’s plenty of it in there too.

Onions – They are dehydrated. That’s what the asterisk means.

We now get into the 2% or less ingredients which means that in essence, this box is filled with a sugary, salty, floury thing.

Vital Wheat Gluten – This is just the gluten left in wheat after all the starch is dissolved or washed away. It’s also marketed as Seitan. It’s a pretty common ingredient in Asian foods, but my guess is that in this case it’s used to add some texture and chew to the finished dish.

Yeast – Good old yeast. I’m not sure why it’s in this dish, but there ya go.

Celery and Parsley – Both are in dried form and there’s just enough in there so they can list it as an ingredient.

Monosodium Glutamate – MSG! This one kind of threw me for a loop. I’m actually not one of those MSG-hating individuals and I’ve never had any adverse reaction from it, but I know some people who don’t react well to it at all. I never would’ve thought it was in this dish, but it will make it a much more savory and salty finished product.

Sugar – Good old sugar. No idea why you need this when you pump it full of High Fructose Corn Syrup.

Hydrolyzed Soy Protein – This is just the protein from soy that’s been extracted. Funnily, it has naturally occurring MSG in it and a lot of times food processors will use it to get the same effect of MSG without having to list MSG on the label. This product just uses both for good measure I guess.

Turmeric – A great spice that adds a fantastic yellow color to anything it touches. I think this product might be using it more for color than for flavor.

Cooked Chicken and Chicken Broth – This is almost comical. So this has some chicken in it and chicken broth, but it has less of these things than HFCS, MSG, and salt. I have no words.

Artificial Flavor – Who knows what this means?

Natural Flavor with BHA, BHT – Ok. I’ve seen natural flavoring of course on ingredient lists before, but the BHA/BHT thing may be new to you. These are both antioxidants that help preserve fats in foods. They also happen to be derived from petroleum and it’s pretty much taken as a given these days that they are both carcinogens for humans. That said, they are allowed by the FDA in super-small doses since the amounts needed to produce adverse affects are huge. That said, I try to avoid them!

Propyl Gallate as Preservatives – Well. This was a new one for me. It’s another preservative that helps preserve fats in foods. I’m pretty scared of it.

So there ya go! That was a lot of ingredients and definitely a few surprises for me.

SO. Can you guess the “food”? Leave a comment!

19 Responses to “Guess The Food #9: Hidden Things” Leave a comment