Ok. You guys are really good at this series. I always think that these posts will be difficult but people usually nail them right away. Of course, it’s not really important if you get them right away or not. The goal is to get to know some of the ingredients that are going into food these days and get more comfortable reading nutritional information.

That said, I’m hoping this one is tough. Of course, I’m sure someone will get it right away, but maybe it’s tricky enough to keep you all stumped until lunch at least!

This is a pretty standard processed food item that’s completely filled with one thing and one thing only: SUGAR.

I’m hoping it’s tricky because that applies to about a million different processed foods these days.

We have a lot of ingredients to get through, so let’s dive in and take a look at the nutritional information and the ingredient list. Hopefully, you can guess the food! 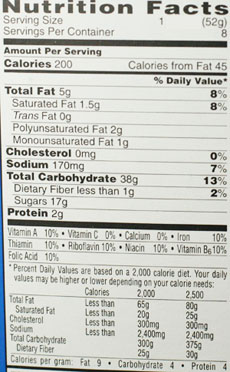 The one thing that smacked me in the face when I first read this nutritional panel was the serving size. I was appalled.

They list the serving size as one, but I promise you that nobody eats only one of these. I think it’s physically impossible to eat one. This is pretty shady on their part, but I guess companies can define serving sizes however they want these days.

Keep in mind, when you look at these facts, to times them by two because literally nobody eats one.

The real substance of this “food” is carbs. Lots of them. Eat two of these (which most people do) and you’ll be getting over a quarter of your daily carbs most of which is sugar.

17 grams of sugar will definitely put a skip in your step! It’s not soda levels of sugar, but it’s pretty darn close.

Let’s take a look at the ingredients and hopefully shed some light on this food. 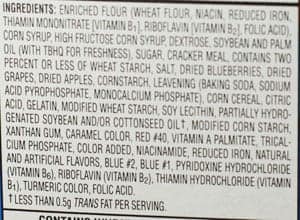 That’s some serious ingredients. Take a deep breath. We’ll get through them all!

Enriched Flour – Crappy white flour. They call it enriched because they strip out all the nutrients during processing and then have to add in (enrich) a few vitamins. The stuff in parenthesis is the stuff they add back in.

Why not just leave it as natural flour? Well, that would make it more nutritious, but decrease shelf life. What’s more important do you think?

Corn Syrup – We all know what this is. It’s thick and really sweet!

High Fructose Corn Syrup – Like corn syrup except even sweeter.

Dextrose – A fancy word for sugar.

Soybean and Palm Oil (with TBHQ for freshness) – Ok. I thought I knew what those oils are, but the TBHQ thing threw me for a loop. Turns out that this is a pretty intense chemical that preserves food “freshness” to an absurd degree. Besides being used in this food, it’s also sprayed on chicken McNuggets for example. I’m not sure that I trust the stuff honestly. Anything that preserves food for that long just can’t be natural or that good for you.

So if you’re keeping track, 4 of the first 6 ingredients are basically sugars.

Cracker Meal – Just crushed up crackers really. Probably included to give the thing some texture.

Then we get into the 2% or less ingredients, which there are a bunch of!

Wheat Starch – A thickener made from wheat.

Dried blueberries, grapes, and apples – Real fruit? Of course, if you look at the front of this box it screams about how much real fruit is jam packed in these things. Yea. Right. Less than 2% for each of these. There’s more salt than there is each of these.

Cornstarch- Much like wheat starch except made from corn.

Leavening- Basic ingredients that cause something to puff a bit.

Corn Cereal – I have no idea what this does in this food. Most corn cereal is puffed corn so I’m guessing that this is probably just for texture.

Gelatin –Thickener from collagen in animal skin and bones. Surprisingly makes this food a no-no for vegetarians which I didn’t know.

Modified Wheat Starch – The same starch as above except this kind has been, well, modified.

Partially Hydrogenated Soybean and/or Cottonseed Oil – The same oils as above except these have been hydrogenated. This adds some trans fats to the food. Since the total amount is less than .5 grams per serving, they don’t have to list it in the nutritional information.

Vitamin A Palmitate – A common vitamin A supplement that’s used to replace the natural vitamins that are stripped out during processing.

Tricalcium Phosphate – Used as an anti-caking agent or as a calcium supplement.

Color Added – Maybe the most generic ingredient ever listed. What the hell does this even mean?

Niacinamide – Yet another supplement.

Reduced Iron – More supplements! You would almost think these are good for you!

Pyridoxine Hydrochloride (B6) – Vitamin B6 supplement.

Thiamin Hydrochloride (B1) – Even more supplements.

Turmeric Color – No idea on this one. I guess they decided the food needed to look more turmeric like in appearance.

PHEW! That was definitely the most ingredients ever in a Guess The Food. I half expected there to be a joke ingredient just to see if people were paying attention… although now that I think about it “COLOR ADDED” as an ingredient is a freakin’ joke.

The question is, did all of these ingredients help you?

Can you Guess this “food”??

20 Responses to “Guess The Food #8: Sugar Town” Leave a comment