The thing that always fascinates me when I look at processed food ingredients (which I do often) isn’t the crazy chemicals or things I can’t pronounce.

Most of the time what surprises me is just the shear number of things in a food.

This guess the food features one such item.  By my count, which quite honestly might be off given duplicates and stuff), I counted 71 different ingredients.  If I were to make this at home, I would guess that even with spices and stuff it would clock in around 15.

It’s amazing to me to think of a lab somewhere when this food was developed.  Someone, at some point, must have said, “Hmm… the sauce is very good, but it could use a dash more Disodium Guanylate.”  Then teams of other scientists give their nodding approval and in goes a pinch.

I’m sure that’s not at all how it happens, but that’s what I imagine happens.

As you wade through all 71 of the ingredients in this list, the real question of course is if you can Guess the Food.

Beyond making my brain hurt, this nutritional chart doesn’t tell us all that much unfortunately.  At just 230 calories, there’s not really much to this thing.  You might need to eat a few of them to consider it a meal and I think most people probably do.

The fat content is pretty high actually given how few calories is in it.  You’re eating roughly 10% of your daily calorie allowance, but getting about 23% of your recommended daily fat intake.  You’re also nailing down more than 10% of your cholesterol for the day and about 17% of your daily sodium intake.  For the record, I thought the sodium content would’ve been much higher.

On the plus side, you do get a fair amount of protein from the food, but even with that I would never consider this a healthy food option.

I’m not sure if this will tell you much unless you can do some serious sleuthing and discover which company produces annoyingly purple nutritional data charts. 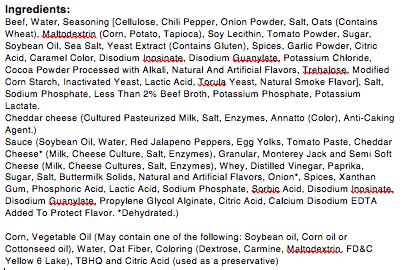 This is an out of control list.  Besides this crazy list of ingredients, the food also usually comes with lettuce which might be a good hint for you.

I took the liberty to edit the ingredient list a bit just to remove some heading that would be a dead giveaway when it comes to guessing this food.  That’s also why some of the words are spell-checked.  Apparently Word doesn’t recognize them as words, let alone foods.

Given how many ingredients are in this sucker, I’m not going to go through all of them.  We all know what beef and salt are, so I’m going to use some restraint here.

Cellulose – I find it pretty funny that the first ingredient listed under the Seasoning portion is actually tasteless.  There are a good number of uses for cellulose so I’m not entirely sure what they are using it for.  If I had to guess I would guess it’s being used as a bulking agent somehow.

Maltodextrin – This is a common ingredient in sodas and candies, but I assure you this isn’t the famous beef candy food.  This is again a starchy additive that’s probably used to bulk up the food.  Maltodextrin can make less beef look like more beef!

Soy Lecithin – A very common food addictive that acts as an emulsifier.  It helps distribute flavor and texture so everything is the same.  Maybe not important if you’re making food in your kitchen, but if you’re making it a few tons at a time, then it becomes an issue I’m sure.

Disodium Inosinate – A flavor enhancer similiar to MSG.  It provides that savory flavor to foods that we all love.

Disodium Guanylate – Another flavor enhancer.  These are both tricky ingredients because they mimic MSG but allow for food producers to say “No MSG” in the food.

Trehalose – This isn’t an ingredient that I was familiar with, but I guess it’s a very common additive.  It has a huge range of uses.  It can be a mild flavor enhancer but also helps with water retention (rehydration).

Potassium Lactate – Very common in processed meat foods because it extends shelf life and also has some antimicrobial properties.

Granular – Alright.  Looking for help on this one.  Under the sauce ingredients there’s an ingredient that’s just called “Granular”.  I have no idea what this is and am starting to think it might be a typo.  Any ideas?

Phosphoric Acid – A food additive that increases the acidity of foods.  There is some debate over the health implications of it.  There are some studies that it could lower bone density, but it doesn’t look like anything conclusive has been decided.

Lactic Acid – This stuff makes food taste sour which can be a good thing.

Propylene Glycol Alginate – One more emulsifier and thickener to add to the list.

Calcium Disodium EDTA – A food preservative that has a pretty turbulent history.  There’s been a lot of reports of pain or discomfort linked to this ingredient, but the FDA continues to say it is safe in minimal doses.

TBHQ – A very effective preservative, especially when it comes to preserving vegetable oils.  This is another ingredient that has some warnings associated with it.  The FDA only allows it in very small amounts.  It’s technically derived from butane… so there’s that.

Ok.  That’s a very daunting list of ingredients with some on the list that are definitely have some debate over whether or not they should even be being consumed by humans.

The real question, of course, is whether or not you can GUESS THE FOOD!

Also, what the hell is Granular?