Sometimes the marketing that companies use to sell products, especially when it comes to food, just makes me steam. Today’s Guess The Food is chalk-full of random marketing gimmicks that are supposed to lure you into purchasing the product.

I really like this Guess the Food mainly because it’s not some super-extravagent thing. It’s an everyday product that’s probably in millions of homes. It’s also not necessarily terrible for you, but it’s not as good for you as you might think.

As with anything, the real purpose of these posts isn’t to vilify any one company but just try to convince people to get in the habit of checking labels and reading ingredients.

Let’s dive in and see what we can find out!

This product has three selling points listed in bright red tape along the back of the label. See?

You’re supposed to notice these benefits and BUY BUY BUY. Let’s talk about each one specifically:

Good Source of Omega 3 ALA – Omega 3 fatty acid is an essential nutrient for humans and we can’t make it on our own so we have to rely on food to get it. The acceptable intake per day for males is 1.6g/day and for females it’s 1.1g/day. One serving of this product provides 18% of that. I guess that’s good.

Here’s the thing though. This fatty acid is in a huge amount of food. Most meats, nuts, fish, and seeds (like flax) are full of this stuff. One 3-ounce serving of salmon and you’re good for the day. If you’re eating a varied diet, you’re probably getting more than enough of this anyway so this shouldn’t really be a selling point.

No High Fructose Corn Syrup – Well, that’s good! Just because a product doesn’t have one thing in it doesn’t mean that it’s therefore good for you. If it said “No Anthrax!” in big bold letters would that make you want to buy it or not?

Delicious Taste with 33% Less Sodium – Less sodium than what? This is a pretty meaningless claim unless you know how much sodium the stuff used to have in it which you can find out if you read the small print. The product used to 510 g sodium per serving and now it’s 340 g. So they reduced it from A LOT to a lot. Good but not great.

So these are maybe all good things, but it’s hard to tell in a bubble. Let’s dive in to some of the other nutritional ingredients and see what we’re getting along with these 3 selling points. 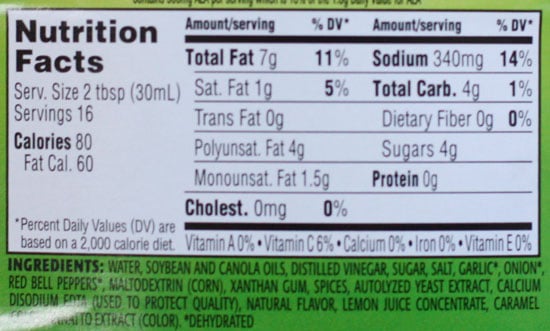 Well, 2 Tablespoons per serving is not a lot. Most of the calories are from fat also. In fact, along with that 18% of your daily Omega 3, you’ll get 11% of your daily fat intake and 14% of your daily sodium intake. These aren’t terrible values (I’ve seen worse), but they do seem slightly high.

There’s no Cholesterol in this but there’s no Protein either. The only other thing of note in this product is 4 grams of sugar, which for 2 Tablespoons of product, is kind of a lot. You don’t need to use High Fructose Corn Syrup to make something sweet!

Let’s find out what’s in this mystery product now. We know we won’t find any HFCS, but there’s plenty to investigate here.

Water – The first ingredient is water. So this is probably a liquid. I’m surprised they don’t market this (Now with 33% more Water!)

Soybean and Canola Oils – Both of these are pretty standard oils. Both of these oils are packed with Omega 3 ALA so this is where that claim is coming from. Given that these are incredibly popular oils, your body is probably getting plenty of ALA without this product.

It’s not that there is anything wrong with these oils in moderate amounts. I just found it funny that they figured out a way to put such a crazy spin on the fact that their product has canola oil in it.

Sugar – No High Fructose Corn Syrup of course, but this stuff is still pretty packed with sugar.

Salt – Even with 33% less sodium, salt is still a top 5 ingredient.

Dehydrated Garlic, Onions, Red Bell Peppers – Some basic flavorful veggies that have been dehydrated and added to the mix.

Maltodextrin (Corn) – I like that they put corn in parenthesis. It’s made from corn, but it’s definitely not corn. It’s a pretty common food additive though and acts as a mild sweetener.

Spices – Who knows what these could be. I’m surprised that there isn’t a sticker on the bottle that says, “Now with more MYSTERY SPICE!”

“May cause intestinal upsets, muscle cramps, kidney damage, and blood in urine. On the FDA priority list of food additives to be studied for mutagenic, teratogenic, subsacute, and reproductive effects.”

NIH released a final study of the additive in 2002 that seems to suggest it’s safe for consumption (obviously because it’s still allowed in foods) but can have some unexpected side-effects in relatively large doses (you would have to drink bottles of this product and then you would have other problems).

Any Guesses? So that’s it. Anybody have any guesses on what this product could be? What do you think of their marketing efforts? Successful? Do you have a sudden urge to increase your intake of Omega 3 ALA?

17 Responses to “Guess The Food #5: Marketing Gimmicks” Leave a comment