It’s been awhile since I’ve done a “Guess The Food” post so I thought I’d throw one into the mix this week. For those of you who don’t know how this works, it’s pretty straightforward. I give the nutritional facts and ingredients of a popular food item and you all try to guess what it is!

The idea of course is that everybody learns a bit more about the food we eat everyday. So let’s get started!

The Facts. There are some interesting things here if you dive into the nutritional facts of this food. A good percentage of the calories are from fat but it’s not actually that caloric. There’s no Trans Fat which is a good thing.

Salty Situation. I also think this food is a good example of the Salt debate that people (and the food industry) are having these days. The argument is that we are eating too much salt. Actually, that’s not the debate. That’s the fact. The problem is that food manufacturers are putting way more salt into processed foods than you would most likely use if you made the thing yourself.

One serving of this food has a quarter of your daily salt intake. I don’t think this item tastes particularly salty so I was pretty amazed by that.

Other Facts of Note. You do get some good stuff though for the high sodium levels. One serving has a pretty good amount of fiber in it and a lot of Protein. Eat this whole box of whatever this is (not that I would recommend that) and you’d get your protein needs for the whole day!

The Double Digit Rule. When I’m glancing over a nutritional facts panel trying to figure out what’s going on in there, I start off by doing a double digit check. I quickly scan down the list and pick out any percentages that are in the double digits. Anything that can give me over 10% of my daily value of something in one serving is worth noting.

Of course, depending on the category it could be good that it’s a double digit (protein maybe) or bad (Salt or Fat). But it’s a good start to try to figure out what this food is going to do for you… or to you…

OK. Let’s try to figure out what’s going into this food that makes it such a protein and sodium fountain. 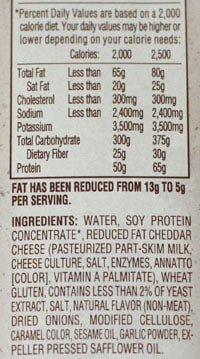 The Ingredients. I must say that I thought there were going to be way more ingredients in this thing. Even if you count sub-ingredients, it’s only at around 17 ingredients which is less than I thought it would be.

Water. Water as the first ingredient. This is actually fascinating. I really have no idea how this can be true. You know what water is though so let’s move on.

Soy Protein Concentrate. The Astrix note just mentions that it isn’t from genetically modified soybeans. Anyway, this is basically flour from soybeans. It’s mostly fiber and protein which accounts for the high protein levels in this food. It’s used in a huge amount of products to retain moisture or boost nutritional values. You can buy the stuff here.

Reduced Fat Cheddar Cheese. The third ingredient is cheese. I love cheese! So go through a few of the ingredients in this specific cheese though.

Pasteurized Part-Skim Milk. Pretty much like all the milk you can get at your local grocery store. Pasteurizing is the process that slows microbial growth in food.

Cheese Culture. Basically a bacteria that’s used to make the cheese. They don’t give us any more info on the specific culture they use, but it’s whatever culture makes cheddar cheese!

Salt. The first appearance of the “S” word.

Enzymes. Ok. That’s a broad word. As far as cheese making is concerned though, an enzyme is needed to coagulate the cheese. Otherwise I guess you’d have something closer to yogurt.

Annatto. Before it was used to color cheeses, this red stuff was used as body paint!

Ok… so now that we’re done with the cheese, let’s get back to main ingredients.

Wheat Gluten. If you dissolve all of the starch out of wheat flour you’ll be left with nothing but wheat gluten. If you ordered this on a menu, it would be called Seitan.

Yeast Extract. A common food that’s actually marketed under the name Marmite. It boosts the savory flavor in foods.

Natural Flavors. Again, not the most specific ingredient I’ve ever seen. It’s not from a meat source but other than that, I have no idea what this could be.

Dried Onions. Onions that have been dehydrated. They’re a lot easier to mix this way.

Modified Cellulose. Well, Cellulose is what plant walls are made of. I’m not exactly sure what the “Modified” part of this is. If you google the phrase, there’s a number of scientific papers on the stuff. From what I could pick up (NOT A SCIENTIST), they modify it to make it easier to digest and also it helps stabilize products.

Caramel Color. This is one of the most common coloring agents for foods. As far as I can tell they make it by carefully burning sugar.

Sesame Oil. One of my favorite oils! It could be used to cook with but it’s mainly used as a flavor enhancer I think.

Garlic Powder. Dehydrated and crushed garlic. I think it has a different flavor profile than fresh garlic, but it definitely has it’s place.

Expeller Pressed Safflower Oil. Safflower Oil is considered very healthy and can provide lots of those good fats that we hear about. Here’s an article on some facts on Safflower Oil.

So, at the end of the day, even with the high sodium levels, this looks like a reasonably healthy processed food to me.

What do you all think? Any guesses on what this could be?!

26 Responses to “Guess The Food #4: Salty Surprise” Leave a comment