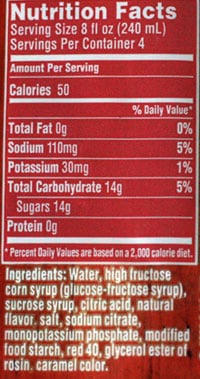 This is the third installment in the Gues the “Food” series. If you’re curious how I come up with these it’s basically a combination of A) reader emails (so you should email me if you have a good idea!) and B) wondering aimlessly around CVS trying to find interesting stuff.

This one was from a reader email and I’m hoping that it’s tougher. I don’t think I would’ve gotten it honestly, but you guys are pretty good and tend to get them right within the first few comments. Let’s see how ya do today.

Well, you can tell pretty quickly based on the serving size that this is a liquid of some sort so that should help you out. You could also guess that by the first listed ingredient, water. Let’s try to pick out a few other details based on the facts.

At 50 calories per serving or 200 calories per quart, it’s not terribly caloric. There are probably worse things out there, but it’s definitely not a diet beverage either.

What’s key to note here I’d say is that if you drank the entire quart bottle of this stuff (which I would guess most people do), you’re getting roughly 20% of your recommended daily sodium intake and also a solid 56 grams of sugar. Having a hard time envisioning what 56 grams of sugar looks like?

Above is what 56 grams of sugar looks like. It’s probably about 5-6 Tablespoons of sugar:

So, from the looks of it, this appears to be, well, sugar salt water.

Maybe the ingredients will tell more.

This is one of the shorter list of ingredients I’ve done, but it’s got some new stuff in it.

Water. Good old H2O. Nothing wrong with water and given that this is a liquid of some sort, it’s not too surprising that water is the first ingredient.

High Fructose Corn Syrup (Glucose-fructose syrup). Listed as the second ingredient on the list, this explains all the sugar. The glucose-fructose syrup label in parenthesis is just what the Brits call HFCS. If you aren’t sure what HFCS is, at its most basic it’s a sweetener made from corn. Manufacturers love to use it because it’s cheaper than sugar.

There’s been some studies that suggest that even the same caloric intake of HFCS instead of sugar can lead to weight gain which is interesting.

For me, I guess I try to avoid the stuff but I’m not a Nazi about it. I’m sure that there are a lot more unhealthy things that I could be eating on a daily basis. As with anything, I just try to be aware of what I’m eating. As long as you are keeping an eye on how much sugar or HFCS you are eating, it’s probably not the end of the world.

All of that said, I was shocked to find it listed as the second ingredient in this drink.

Sucrose Syrup. Apparently the manufacturer thought they needed more sugar in this product. Sucrose is basically table sugar and you can make a syrup out of it with some water and some heat. It just makes it easier to add, say, to a beverage.

Citric Acid. A light acid that’s used a lot in foods as a flavor agent and as a preservative. It’s found naturally in all kinds of citrus fruits, hence the name.

Natural Flavor. Talk about an non-descript ingredient. Why don’t they just say, “Stuff.”

Salt. There’s a fair amount of salt in this drink actually. As with most foods, there needs to be a good balance between salty and sweet and this drink has a lot of sweet so it’s got to have at least some salt.

Sodium Citrate. A random chemical that as far as I can tell is used mainly in drinks to keep PH levels steady.

Monopotassium Phosphate. This one was kind of hard to find info on honestly. The best I could unearth is that it’s used mainly as a simple preservative. Makes sense I guess.

Modified Food Starch. Basically a thickening agent. It can also be used as an emulsifier. I’m guessing they don’t use much of this stuff as it isn’t really a gravy or anything.

Glycerol Ester of Rosin. I have to say, I’ve never seen this before. Looks like just another emulsifier and stabilizer though.

Caramel Color. Guess what. It turns things a caramel color.

So there’s the run down. I thought this one might be tricky so prove me wrong!