I think the first installment of Guess the “Food” was pretty easy. Too easy actually. So I’ve kicked it up a notch for this post. The packaging is pretty bland and there aren’t a lot of hints here. This one should be tricky.

I subbed out the actual serving unit for widgets as it would completely give it away. Also, I think that the amount of “widgets” in any given container is always the same. The say “About 8” but I’m pretty sure that they are always identical if that’s any help.

The first thing that stood out to me when I checked out the facts of this product is the huge list of fats that they listed. Most of them are zero grams except Polyunsaturated Fat.

Polyunsaturated Fat isn’t actually bad for you in moderation. It’s found a lot in fish and nuts and seeds. When used instead of Saturated Fats and Trans Fat, it’s been shown to actually lower cholesterol.

Well, turns out it’s kind of hard to know. If there are other fats in trace amounts (which there obviously are in this case), they don’t have to list them. We shall never know!

Other than that, it’s looks like a big salty, carby thing. There’s no sugar in it at all so it’s definitely not sweet. 190mg of sodium is pretty high though. Just five of these little suckers is almost 10% of your daily salt intake. That’s pretty intense. Especially considering I can eat like 20 of them at a time.

On the vitamin side, there really isn’t a lot to mention. A bit of iron for ya, but other than that this is looking like a big void. 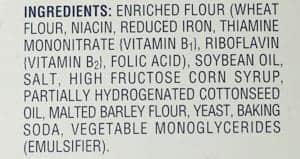 I think I’m a pretty firm believer in the theory that you should be able to tell roughly what something is by looking at what it’s made of – hence this post idea.

The jury still might be out on this one. We’ll see how you guys do.

Enriched Flour – This came up sort of in the first Guess the “Food” post also. The basic story behind any enriched flour is that they take perfectly good flour, strip it of all of its nutrients and then “enrich” it with nutrients and ingredients of their choosing.

From a processing standpoint I can see the advantages to this I guess. You can guarantee a uniform product and customize the flour to your liking. From a consumer standpoint, it kind of steams my broccoli if you know what I mean. Here’s a few of the standout ingredients that make up this batch of enriched flour:

Wheat Flour – Of course, the first ingredient is real flour. Too bad they can’t just use that.

Niacin – Niacin is a vitamin (also known as B3). It’s listed as one of the 40-80 essential human nutrients.

Thiamine Mononitrate (B1) and Riboflavin (B2) – Both are important vitamins and essential for humans.

Folic Acid – Yet another important micronutrient that they thankfully added back in.

Of course, normal flour has all of these things and a lot more, so the question again is, how is this “enriched” exactly?

Soybean Oil – Ok. The next ingredient on the list and therefore the second most prominent ingredient by weight is an oil. You probably have some of this in your pantry. It’s normally marketed as “vegetable oil” in the States. Pretty harmless stuff if used in moderation.

Salt – My favorite ingredient. The fact that it’s third on the list accounts for the high sodium content of these widgets.

High Fructose Corn Syrup – I don’t know why, but I was floored to see this in this product. I guess because I’ve made a very similar thing on Macheesmo and it never occurred to me to put any kind of sweetener in it. Of course, HFCS is used for other things besides sweetening like preserving foods, which makes more sense in this context. This stuff is in everything!

Partially Hydrogenated Cottonseed Oil – The partially hydrogenated part refers to a process of making the oil semi-firm at room temp. Cottonseed oil is used in a ton of processed foods to increase shelf life.

Malted Barley Flour – Just a standard kind of flour. In fact, you can buy it! It’s supposed to improve flavor and texture of baked goods and also, again, increase shelf life.

Yeast – For some reason I was shocked also to see yeast in this product. You probably know what yeast is, but it’s generally used to make things rise.

Baking Soda – Also known as Sodium Bicarbonate this stuff is also helpful when you want something to rise.

Vegetable Monoglycerides – As stated in parenthesis, the main purpose of this is to act as an emulsifier. It helps mix two things that don’t normally want to mix, like oil and water. Monoglycerides can be made from either animal or vegetable and they are, again, very common in baked goods.

Phew! So that’s the rundown for today’s Guess that “Food”.

Anyone have any guesses as to what this might be?!

PS. I’m always taking suggestions for “foods” to use for this post which I’m going to try to do every month or so. You can just email them to me if you have a good one!