It’s been over a month since I’ve done a Guess the Food and even though this one might be pretty easy for you Guess the Food experts, I couldn’t help myself.

Sometimes when I’m browsing the aisles looking for a good product for this series (notice I said product and not food), I sometimes start by looking for any products with asterisks or footnotes.

I just find it funny to investigate what these companies are footnoting.

This certain product has a really interesting footnote!

I love creamy foods and rich foods so I was pretty intrigued by this claim.

I was mainly intrigued because, as you’ll see, the first ingredient in this product is actually water. Now if I wanted to make something creamy I would start with… you guessed it… CREAM.

But what do I know.

If you follow the footnote on their Richer & Creamier claim, you’ll find this little gem at the bottom of the packaging:

“Among consumers with a preference.”

1) What the hell does that even mean? Are there consumers without a preference? Maybe but how do they know somebody has a preference before they ask them?

Or, once you think about this for a few minutes (longer than you should unless you’re me), you might start envisioning how this “survey” went down.

Surveyor: Please taste these two creamy products and tell me which is creamier.
Taster 1: They taste the same.

Surveyor marks Taster 1 down as someone without a preference and therefore excluded from the survey.

Surveyor: You sir. Please taste these two creamy products and tell me which is creamier.
Taster 2: Well product 2 of course.

Clearly this man has a preference! Mark it down as Richer & Creamier!

Nobody knows what happens to those people who say that product 1 is creamier. As Indiana Jones would say, “Choose wisely.”

So another way to read the footnote is something like, “Richer & Creamier to those consumers that thought it was richer & creamier.”

2) Richer and Creamier than what? Let me just go ahead and show my hand a bit. I’ve eaten probably gallons of this stuff throughout my childhood. I tasted this version. It tastes the exact same as it ever has.

And I would like to think that I have a preference when it comes to creamy items. I tend to like creamier things.

This is the same as it ever was.

Ok. But that’s not the point of this series. The point is for you to guess what this magical stuff is. First, lets take a look at the nutritional info. 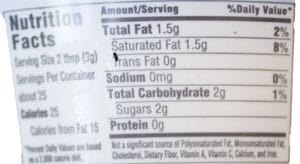 When I first saw this, I thought that 25 calories for two tablespoons isn’t all that bad. And it isn’t assuming that you’re eating healthy stuff.

As a comparison, two tablespoons of full fat yogurt made with whole milk has about 20 calories. So it has more calories than the highest calorie yogurt, but it’s not like it’s blue cheese dressing or something (250 calories/2 Tablespoons).

Unfortunately, there isn’t much to say about this nutritional information: good or bad. There’s no salt, no protein, very little fat or carbs. It’s almost as if it’s a container of air.

So let’s move on.

As always, I find these fascinating. As mentioned, this product is supposedly creamy and rich, but milk and cream are the last main ingredients on the list. They make up a very small fraction of this product.

So let’s break it down specifically.

High Fructose Corn Syrup – Probably used not only as a sweetener but also as a stabilizer. I wasn’t shocked to see it way up on the list. There’s not a huge amount of it though because it would lead to higher sugar percentages.

Corn Syrup – The non-high fructose kind. I’m not sure why food producers use both, but there ya go.

Skim milk – I think it’s hilarious that they use skim milk in this product. One would think that if you were going for a creamy texture, you would use whole milk.

Light Cream – Again with the lightening of creamy dairy things. Why?

Now onto the weird stuff.

Sodium Caseinate – Casein is basically the milk proteins. It’s used a lot in cheese making. Who knows what they are using it for.

Natural and Artificial FLavors – If you have access to the natural flavor, why would you use the artificial one? Baffling really.

Xanthan and Guar Gums – Both of these items are emulsifiers. They make stuff stay blended and also thicken things.

Sorbitan Monostearate – Yet another emulsifier. It makes a lot of sense that all these emulsifiers are needed when the first two ingredients are oil and water. You’re gonna need a lot of chemical help to get those to stay 100% stable forever.

Beta Carotene (color) – It’s hilarious to think that they colored this food if you know what it is.

This product doesn’t have as many ingredients as some of our previous ones, but I like it’s style. My guess is that it’ll also be a popular purchase for the upcoming July 4th weekend.

So… can you guess the food? Leave a comment!