It’s time for another Guess The Food! For those that aren’t familiar with this series, I post the nutritional facts and ingredients of a popular processed food and try to stump you all. If you have an idea of what the food might be, leave a comment!

The goal is to hopefully learn more about the food we eat everyday while also having some fun.

Before even getting into the nutritional info, the thing that struck me about this particular food was the above phrase loudly branded on the front of the packaging.

Ok. Well, 10 Vitamins and minerals is easy to check. But it also doesn’t say much. Putting minuscule amounts of 10 different things will get you there. It says nothing about quantity. But “Good Source of Calcium” implies more to me.

TO ME, it implies that if I eat or drink this thing, I’ll get a good percentage of my daily calcium needs.

But lets see what that really means…

So it turns out that a serving of this thing has only 10% of your recommended daily calcium intake.

I don’t know about you, but I don’t really consider that a “good source” considering that a serving of milk has 30% and a serving of yogurt has “40%”. I mean heck, half a cup of spinach has 12% of your daily calcium needs.

After some digging, I learned that these kinds of claims are all very well defined by the FDA in what’s called the Nutrient Content Claims Chart. It turns out that any producer can label something as a “Good Source” if it contains 10-19% of your daily recommended value.

Frankly, I think this is a pretty low standard. This chart was established in the 90’s and it desperately needs to be updated. If you’re ever curious about what something on a package means (Like what is an “antioxidant”), this chart will tell you the minimums producers have to meet to put that phrase on their products.

Ok. Now that we have that rant out of the way, let’s take a look at all of the nutritional facts.

If you’ve read these guess the food posts before, you’ll know that when I’m looking at a facts panel like the one on the right, I generally start by looking at any categories with more than 10% of my daily value per serving.

In this case, that includes Fat, Sodium, and almost Carbs. But honestly nothing looks too high. I can tell you that if I made these from scratch they would contain more fat and probably also more protein.

At the bottom are those ten vitamins they were touting. Nothing above 20%, but you’re getting some stuff I guess.

Let’s move on so you can hopefully get some clues!

There’s a pretty good sized list of ingredients here, but most of them are vitamin additives. Let’s dive right in!

Enriched Flour – The backbone of processed foods! It’s shelf stable forever because they take out all the perishable parts of flour (nutrients) and add in a few key vitamins. Adding the vitamins back in makes it “enriched” even though it’s not as nutritionally whole as the original. Go figure.

Vegetable Oil – Pretty standard ingredient. I have a big bottle of it in my pantry right now. You probably do too! 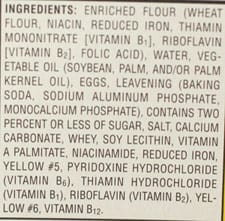 Eggs – They probably got theirs from chickens.

Leavening – An assortment of minerals that cause a reaction and create air bubbles. The most common are baking soda and baking powder, but it looks like they have a few others in there as well. As far as I know they all do basically the same thing.

Sugar – And not a lot of it! I was shocked at how little sugar was in these and also that there wasn’t High Fructose Corn Syrup.

Salt – Gotta have it!

Calcium Carbonate – This is what they add to foods to get some calcium in them. Normally this food would have very little calcium. I was shocked at all the things Calcium Carbonate is used for, but it’s safe for humans as long as you don’t take too much of it.

Whey – Curds and whey baby. This is just the liquid that’s left over after they squeeze out the curds for cheese. I have no idea why they need it in this food, but there ya go.

Soy Lecithin – I think this is maybe the most popular ingredient in processed foods. It seriously in everything. It’s used to keep things mixed together so it’s popular in doughs and stuff. But it’s in some things for no apparent reason.

All the rest of the ingredients on the list are either colorings or vitamin additives that they put in. They do, after all, promise that this food contains 10 vitamins so they have to add like 7 of them in to meet that goal. None of it is harmful though, it’s just a lot of stuff to make something that really only requires like 5 ingredients.

So there ya go! This one might be kind of hard (I hope so), but I always think these are hard and somebody always gets it before lunch.