I’ve taken a bit of a hiatus with the Guess the Food series, but I happened to spot this gem of a “food” a few days ago and thought it was a good one to bring the series back.

Let’s talk a little bit about this “food” without giving away too much!

To be honest, anytime a food product has the phrase “something-Free” I get very skeptical.

After all, is anything ever free in this world?

In this case, this “food” claims in huge bold letters to be sugar free. But sugar free is not sweetener free.

This particular thing is sweetened not with sugar, but with Splenda, which is sucralose. 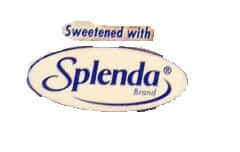 I’ve written about this before in a separate guess the food, but when companies substitute sugar for a sugar alcohol, it comes with some advantages and disadvantages.

Most important, sugar alcohols don’t cause a spike in blood sugar. This can be really helpful for some people, but it does not mean that this food is any less caloric.

In fact, in very tiny letters on this box it even says: 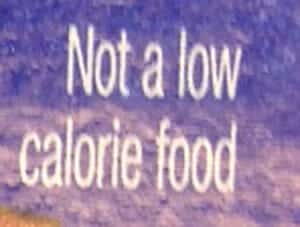 Many people though think that sugar free means less calories so they actually eat more of it which can cause you to get damn fat even if you’re eating only sugar free foods.

To me though, one of the major disadvantages of it is that I think it just tastes bad. If I’m eating something that’s supposed to be sweet, I want it to be good and not have a strange chemical after taste.

I don’t mind a few extra calories if it tastes like the real thing.

Most importantly though, I think it’s important for people to remember that sugar free is not calorie free.

Let’s get down to the basics on this food.

The very first thing to point out about the nutritional panel is the serving size. It’s crazy low. 38 grams is 1.3 ounces.

I can promise you that this thing does not feed 12 people. It’s probably closer to six or maybe eight.

As you  read down the nutritional panel, it’s never a good thing to see a lot of double digits in the % Daily Value column. If you’re getting 20% of your recommended daily fat from this one little thing than it doesn’t really matter that it’s sugar free.

Also, note under the Carbs that there is, in fact, no sugar, but plenty of sugar alcohol.

There’s not much else to say on the nutritional info so let’s move on to the good stuff. 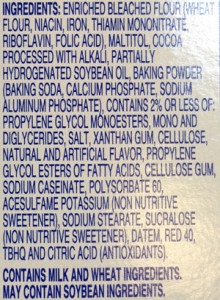 Let’s break down this long list of random things one at a time.

Enriched Bleached Flour – Plain white flour. It’s hard work getting all the nutrients out of this stuff and then putting some back in.

Maltitol – The first sugar substitute. Interestingly, this is not Splenda even though that’s what’s advertised on the box. This is something very different which has a documented laxative effect. Have fun.

Cocoa Processed with Alkali –This is what is generally referred to as Dutch processed cocoa powder.

Propylene Glycol Monoesters – This is a scary sounding chemical name but is really just an emulsifier that also preserves shelf life. It’s in lots of things including shampoo.

Mono and Diglycerides – Another common emulsifier that help oil and water stay mixed together.

Xantham Gum – This is becoming a more common ingredient in average kitchens. It’s frequently used to replace gluten and is a thickener.

Sodium Caseinate – This is the technical name for casein, the protein found in milk and cheese.

Polysorbate 60 – I never find it fun to read an ingredient that has a number attached to it. After all, you never see “Broccoli 75” as an ingredient. Anyway, this is yet another emulsifier. If you haven’t caught on yet, this is a thick food.

Sodium Stearate – This is the most common white soap you can buy. I guess it’s also in some food flavorings.

Sucralose – Splenda! Finally. Even though it’s advertised on the box it’s the last used of three sugar substitute sweeteners. Interesting.

Datem – An ingredient that’s used a lot to improve the body of doughs.

TBHQ – Ugh. This ingredient has a sordid history. It’s technically deemed safe by the FDA but is derived from butane and you probably wouldn’t want to take a straight shot of the stuff. In super-small quantities, it’s claimed to be safe and is used to preserve shelf life. Personally, I would rather have sugar and a food that goes bad.

Citric Acid – Another preservative although this one is more natural.

Can You Guess the Food?

I think this one is kind of tricky, but let’s see if we can make it past lunch without someone getting it right!

If you think you know what this “food” is, leave a comment!

If you want to see the answer for the food, I posted a picture of on Twitter!

16 Responses to “Guess the Food: Sugar Alcohol!” Leave a comment