If you would’ve told me even a few weeks ago that I’d be advocating not putting cheese in an omelet, I’d say that you must have me mistaken with a different food blogger.

An omelet without cheese, in general, is not an omelet I care about. But, what I like about cheese is that it gives a nice layer of richness and, frankly, fat to the omelet. Avocados can do the same thing.

The only almost issue with this Guacamole Omelet is that guacamole and cooked eggs have surprisingly similar textures so it helps to add some crunch to the plate. Tortilla chips work and you can kind of dip them into the omelet!

A delicious homemade omelet stuffed with a chunky, spicy guacamole. Serving it with tortilla chips is very important!

1) To make guacamole, mince shallot and Serrano very finely. Cube avocado and add it the bowl and mash everything together. It’s okay to keep it a bit chunky.

2) Stir in lime juice, cilantro, and season with hot sauce, salt, and pepper.

3) Add a dab of butter to an omelet skillet (nonstick) over medium heat. Once the butter is melted, add scrambled eggs (2 eggs scrambled well with 1 tablespoon water).

4) As egg cooks, use a spatula to push the cooked egg to the center of the pan. Tilt the pan as you do this so the uncooked egg flows out and comes in contact with hot pan. Keep doing this until the egg is mostly cooked. There should be a light layer of uncooked egg on top of the omelet.

5) Add half of the guacamole to half of the omelet and return to heat. Cook for 20-30 seconds.

6) Slide omelet out of the pan onto a plate, folding it as you slide to form the traditional omelet shape. If you want the egg cooked more, you can fold it over in the pan using a spatula and continue to cook until the egg is completely cooked through.

7) Garnish omelet with cilantro and hot sauce and serve with tortilla chips!

This is a basic version of guacamole, but that doesn’t mean that it’s any less delicious. For this version, I used just a few standard ingredients.

Be sure to mince your pepper and shallot very finely as you don’t want a huge chunk of either in your guacamole.

If you want the guacamole spicier, leave in the pepper seeds. Otherwise you can scrape them out before dicing up the pepper.

I made a little photo walkthrough below of how I pit and mash my avocados for guacamole.

Pretty straightforward. Once you have the avocado mashed in with the shallot and pepper, add in the lime juice, herbs, and season it with salt and pepper.

I left this version a bit on the chunky side as well. 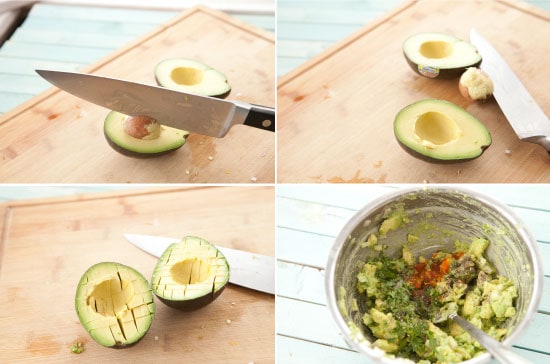 I’m not going to sit here and type to you that I know the absolute best way to make an omelet. There are a bunch of different ways and it kind of just depends on how you like your omelets. Some people like thin layers of egg so the griddle omelet might be a good idea for them.

Some people might prefer a more french style (this is closer to that) which cooks quickly and leaves the egg almost medium-rare if that makes sense. It’s not cooked until it’s completely firm.

That’s the method I attempted for this post, but you could put guacamole in any omelet really.

It helps to have a nice pan like this but any nonstick pan will do the trick. It just makes life easier.

When you’re ready to cook the omelet, whisk your eggs really well with some water. Really beat the crap out of them so they are a single consistency.

Then add some butter to your skillet over medium heat and once it’s melted, pour in your eggs. Two eggs makes a good omelet in my opinion.

As the eggs cook, use a spatula to move the cooked egg into the center and let the uncooked egg flow out to the outer parts of the pan.

Repeat this method until the egg is mostly cooked. There will be a very thin layer of uncooked egg on the surface of the omelet and that’s okay.

Once most of the egg is cooked, add half of your guacamole to one half of the omelet. Feel free to go heavy on the guac!

Let this cook for another few seconds over the heat and then slide the omelet out of the pan onto a plate. This is why it’s nice to have a good nonstick skillet.

Note that for my omelet, there might still be a tiny bit of undercooked egg in the omelet. I actually like this consistency in my omelet but if it weirds you out then fold the omelet over using a spatula in the pan and continue to cook it for another 30 seconds on each side. That will finish cooking the egg completely.

Garnish the Guacamole Omelet with cilantro and hot sauce and serve it with chips!

The omelet is great, but it’s also fun to dip a chip into the omelet.

I’ve made a good number of omelets over the years, but this is one of my favorite for sure.

Guacamole in an omelet? Are you sold on it? Leave a comment!