A number one question I get asked when I tell people I’ve been a food blogger for almost a DECADE is how I come up with recipes! Well, the truth is that I talk to a lot of people about food and cooking!

Sometimes the ideas or recipes people tell me about go one ear and out the other (quite possibly correlated with the number of beers I’ve had during the conversation), but sometimes a recipe will stick in my brain and I’ll just have to try it.

This strange recipe (it seemed strange to me at first) was the result of a conversation that I had with one of Betsy’s relatives a few weeks ago. We had a casual BBQ dinner at our house and I was telling her how I really don’t love grilled salads. I’ve just never had one that made me go WOW.

She told me about this grilled chicory salad recipe from the Gjelina Cookbook (a popular LA spot I’ve never been to). It had bacon, eggs, and hearty veggies. I just had to try it.

This unassuming salad is jam-packed with flavor thanks to a bacon honey vinaigrette and some crispy eggs on top. YUM!

Inspired by a recipe in the Gjelina Cookbook

Step one here is making some bacon bacon grease for the bacon vinaigrette.

I’ll just let that sit there on the screen for a bit. You know it’s gonna be good.

Render the bacon over low heat so it doesn’t burn. It’ll take 10 minutes or so. Save the crispy bacon bits for later of course!

You might end up with more than 2 tablespoons of bacon grease depending on how fatty your bacon is so measure out the amount for the recipe and pour off the rest. Then whisk in the other ingredients.

The honey is very important. Chicory, especially radicchio, can be a bit bitter and the honey helps balance it out.

Speaking of radicchio, look at these beauties! You could use any chicory or a mix of them. Endive, escarole, etc. should all work fine here. Clean them well and toss them with some water, olive oil, and salt and pepper. I think the water helps cook them quickly on the grill because it evaporates fast. That’s the only reason I could think the recipe called for it.

I like the idea of using sturdy veggies like these because they don’t just fall apart on the grill. Add them to the hottest part of the grill for about 30 seconds until they start to char and then stack them up on a lower heat, indirect part, for a few minutes so they can wilt a bit and get tender.

Some uneven cooking is good here, in my opinion. Some pieces will be more wilted while others are crispier. It’s all good.

The eggs are key here. The recipe calls for crispy, olive oil fried eggs. I will not argue with that! You can kind of spoon the hot oil over the eggs as they cook so you don’t have to flip them.

When the chicory comes off the grill, toss it with the vinaigrette and then divide it between plates. Add eggs, season with salt and pepper, and sprinkle with bacon.

This grilled radicchio salad was definitely a new one for me, but I really liked it. It was hearty enough to almost make a meal out of honestly, but the flavors were really complex even though there aren’t that many ingredients. 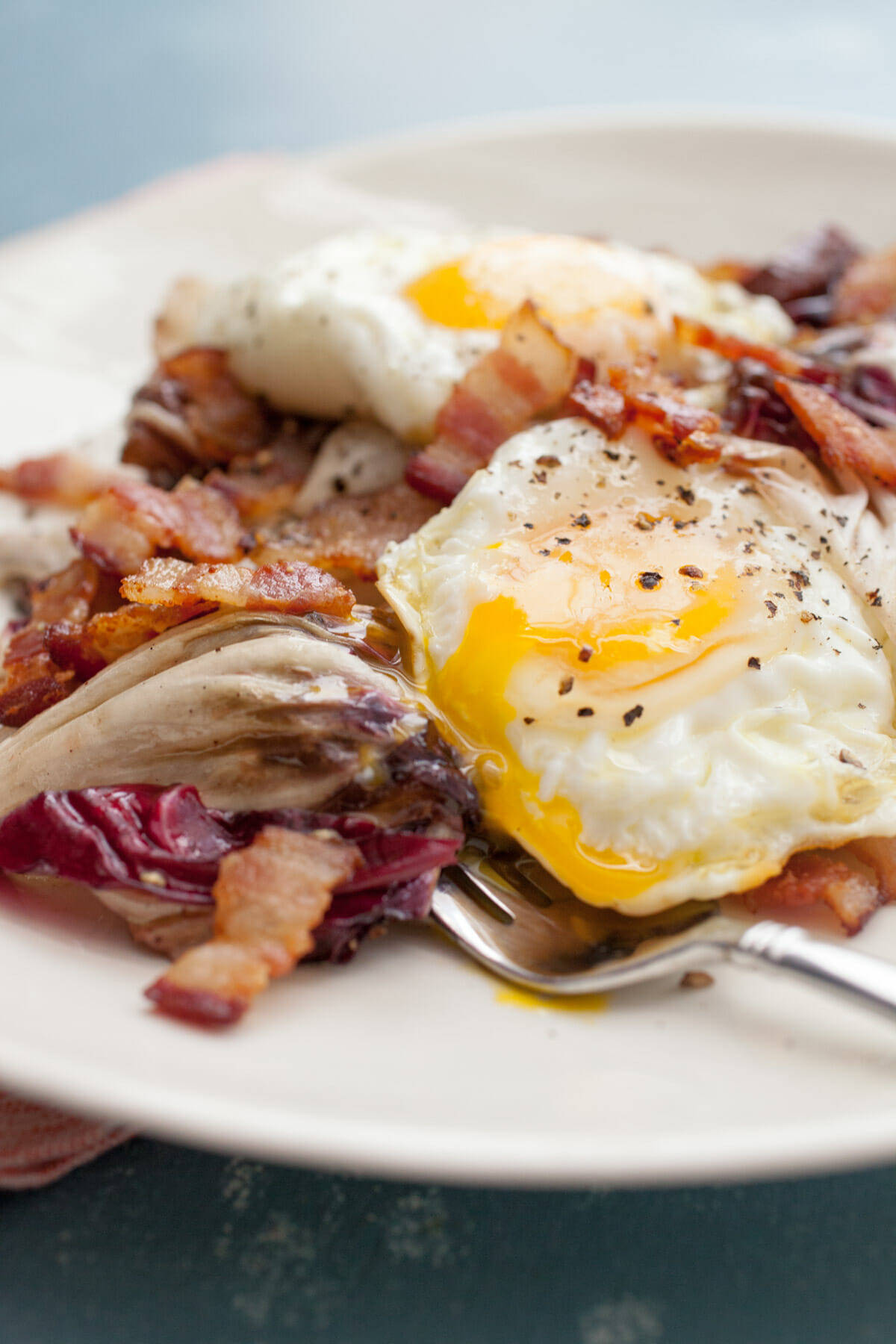