This is a sponsored post written by me on behalf of Char-Broil. All opinions are 100% mine.

I get it. You want French fries but the last thing you want to do right now is turn on the oven or heat up the deep fryer. What’s left but the grill? Luckily, delicious French fry foil packs are completely doable.

But why stop there? I’m sort of at the point in my life where if I’m going to spend the time to make French fries on the grill, I’m going to go the extra step and make them special. Enter the Grilled Poutine Foil Packs!

These are… umm… what’s the word… amazing.

Poutine foil packs wrapped and tossed on the grill until crispy. Then topped with cheese, gravy, and cheese. A great appetizer and no oven needed!

For the gravy:
1) Add butter and minced shallot to a medium pot over medium heat. Cook shallot until soft, 2-3 minutes. Season with a pinch of salt.

2) Stir in flour and cook for a minute until it starts to turn a light tan color.

3) Stir in beef stock slowly so it doesn’t clump. Stir until gravy is smooth and bring to a simmer to thicken. Add Worcestershire sauce, mustard, and season with salt and pepper. Turn heat to low and keep warm until needed.

For Packets:
Prepare grill for direct heat either by lighting charcoals and letting them burn down, then spreading them out, or heating gas grill over medium-high heat.

1) Split 1 pound of frozen large fries or wedges between two large pieces of foil. Drizzle each pack with 1 tablespoon melted butter. Fold the foil up around the fries to form some sides and cover each pack with another piece of foil. Seal the packs closed tightly.

2) Add packs to grill over direct heat, covered. Grill for 10 minutes, then flip and grill for another 10 minutes.

3) Flip packs back and carefully open them up to release steam (be careful). Take cover off of packets and sprinkle each one with cheese curds or cubed cheese. Cover grill and grill for another 5-7 minutes until cheese is just starting to melt.

4) Drizzle poutine packs with brown gravy and cover again for another few minutes.

The Real Deal and The Shortcut

I made two important decisions for these. First, I decided to make the brown gravy from scratch. A good poutine is all about the gravy and I wanted it full of shallot and butter and richness.

Second, I decided to use frozen french fries. The thick cut steak fries to be exact. If you don’t use the frozen ones, you’ll have to first make french fries (frying, etc.) and then make the packets, or try to cook the potatoes in the foil which can work but you’ll end up with more of a poutine au gratin situation. Not terrible, but not what I was going for.

So: Homemade sauce. Frozen French fries. Life is about compromise.

Let’s talk gravy. Get it started with a large minced shallot and some butter in a medium pot. When it’s soft, season it with salt and pepper and stir in the flour.

When the flour has cooked for a few minutes, pour in the beef stock slowly. Because of the shallot, you don’t even need to whisk the beef stock in. Just stir out any clumps that form.

Eventually you should have a smooth, creamy brown sauce. You’ll need somewhere between 1 1/2 – 2 cups of stock to make this happen. Then stir in the mustard and Worcestershire sauce.

This is good to go. Just keep it warm until you need it!

These poutine foil packs need to grill over direct heat. The lovely people at Char-Broil were nice enough to send me their brand new Kettleman grill to try out and I must say that I was pretty impressed.

I love that the grill has a three-tier system for ash, charcoal, and grilling. This really helps with flare-ups and clean-up. Meanwhile, the large dome with big close-able openings allows for great temperature control. It retains heat really nicely. To be honest, I was pretty shocked that the Char-Broil Kettleman Grill has a price tag of $139. It’s a really nice grill for that price.

I got about 30 charcoals heating for my foil packs.

You can absolutely make these on a gas grill also. Just let the grill preheat over medium-high heat and then proceed with the recipe as normal. Just keep an eye on the packs so they don’t get too hot and burn. You might need to turn the heat down to medium at some point.

Make two sturdy foil packs and add about a pound of frozen fries to each pack. Drizzle the frozen fries with melted butter. I like to use the thicker fries because they will hold up better to all the toppings.

Completely seal the foil packs with a top piece of foil.

When it comes to the cheese curd, I couldn’t find fresh cheese curds. This drove me crazy, but I just had to improvise. I tried two different cheeses: fresh mozzarella balls in brine that I roughly chopped and a good sharp cheddar.

Personally, I think the mozzarella came out better.

When your coals have stopped burning and are mostly white, spread them out in an even layer on the grill.

Add the poutine foil packs to the grill and cook them for 10 minutes, then flip, then another 1o minutes.

If you have your gravy in a stainless steel pot, you can also just place it right on the grill (slightly off the heat) to keep it warm!

After about 20 minutes of total grilling, the fries will be pretty crispy on the edges and steaming hot. Now open up the packs (carefully – steam) and add the cheese!

Keep the packs uncovered, but cover the grill and let them cook for another five minutes.

Then ladle on some (read: a lot) of gravy and let heat a bit more.

Once you add the gravy you want to eat them pretty quickly as they will start to get soggy. Leaving them on the grill for a few minutes is no big deal though.

A big pinch of fresh chives adds some color to the grilled packs.

I don’t think I need to tell you how good they are. 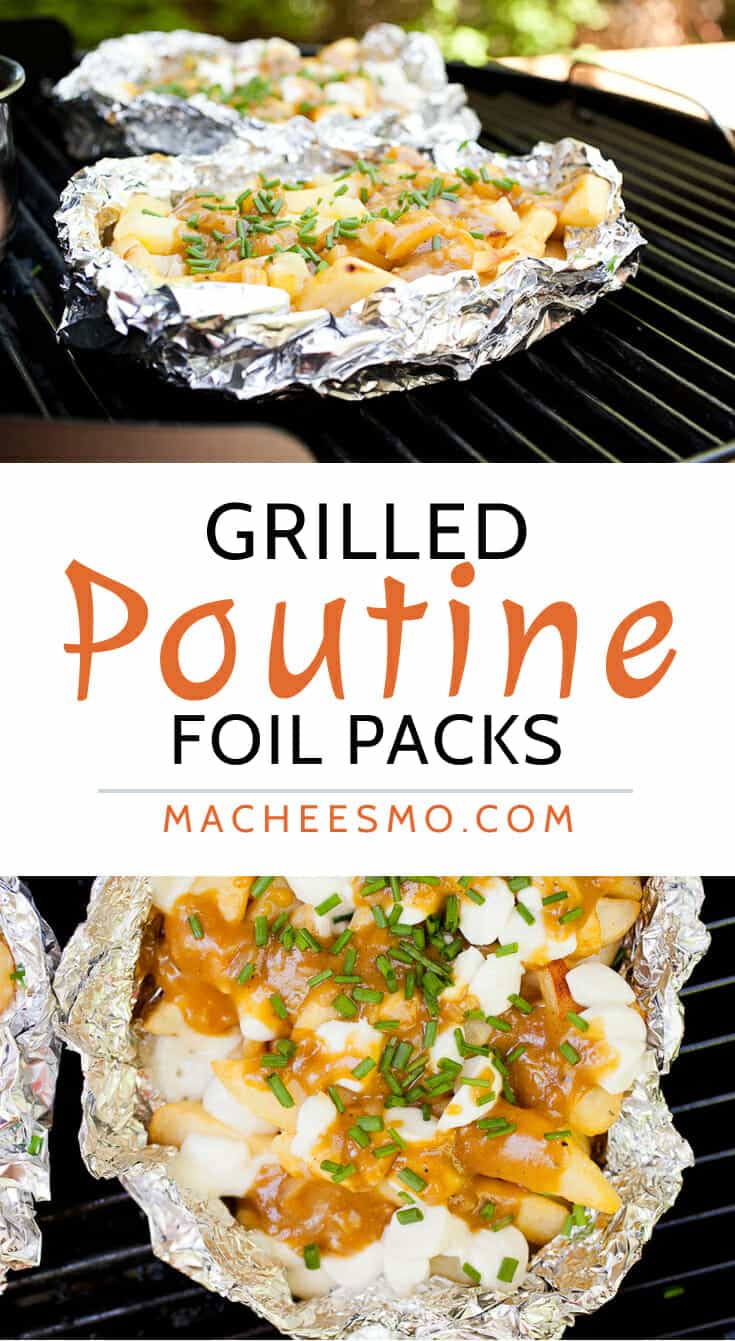 If you’re interested, learn more about the Kettleman grill or just check out the Char-Broil Kettleman Grill video!