This post is sponsored by Bob’s Red Mill. They make a huge range of quality products including the Gluten Free Pizza Crust Mix I used for this post. Check them out on Facebook and follow them on Twitter  for lots of fun recipe ideas. For a limited time, you can snag a $1 off coupon for their products!

Guys and gals, I have a serious bomb to drop on you: I LOVE GLUTEN.

Okay. I know that’s actually not much of a shocker if you’ve read Macheesmo for long. Pizzas, breads, and baked goods are some of my absolute favorite things. So you might be a bit confused as to why I’m writing about a gluten free pizza situation. Let me explain.

My mom has been gluten free for the last few years and as an Italian, she has marinara sauce flowing in her veins. Pizza is one of her favorite things and it has been tough for her to give it up. When we get together we will occasionally try a gluten free pizza crust recipe and it’s never great. I’ve tried probably half a dozen from various sites over the years and they are all lackluster at best.

In short, I don’t think that you can make a great gluten free pizza crust at home unless you’re an expert.

So, I turned to my good friends (and frequent sponsors) at Bob’s Red Mill. I noticed they had a gluten free pizza crust mix available and while I’m normally very against baking mixes, this was one area were I could use some help. They sent me a bunch of it and I’ve tried it out a few times over the months. And I have to say, if you must banish the deliciousness of gluten from your diet, this is about as good as it gets in my opinion.

Since it’s hot outside now and my grill is permanently fired, my favorite use of the dough right now is a simple grilled gluten free pizza done margherita style! It has clean flavors and a crispy, charred crust.

1) In a large bowl mix water and yeast (included with Bob’s red mill package). Let stand for a few minutes until bubbling, then add eggs and oil and mix together. Finally add pizza crust mix and mix until fully combined.

2) Leave dough in bowl, cover with plastic wrap, and let rest for 20 minutes. While the dough rests, Preheat your grill to medium-high direct heat. Also, slice tomatoes and mozzarella cheese. Season tomatoes with a sprinkle of kosher salt.

4) When grill is ready, rub the grates with neutral oil to prevent sticking and slide pizza onto grill over direct heat. Cover with grill lid and grill for three minutes. Carefully flip the pizza and grill for another 3 minutes. Then flip back so the cornmeal crust is on the bottom.

5) Drizzle dough with olive oil and add a layer of sliced tomatoes and mozzarella cheese. Season the pizza with big pinches of dried oregano and kosher salt. Let grill, covered, for another 8-10 minutes until crust is crispy on the edges and cooked through and the cheese is melted.

If at any point the crust is burning or looking too dark, turn heat down or move coals around for more indirect heat.

6) At the very end of cooking, add fresh basil to the pizza.

When pizza has a crispy, dark crust and toppings are hot, slide pizza off of grill using peel or lift it back onto a clean baking sheet with a large grilling spatula.

Let pizza rest for a minute or two and then slice into large pieces and eat while warm!

In my opinion, gluten free pizza isn’t great on day two so chow down!

Anybody who has read Macheesmo knows that I’m generally against mixes for things like pancakes and muffins. They are just flour and a few other cheap ingredients (sugar/salt/baking powder) packaged together and then the manufacturers charge you more for it.

This mix is kind of a different deal though because it’s for a very specific thing that is very hard to make. You can search around for gluten free pizza dough recipes all day long (there are almost 2 million results on google), but I’ve yet to find one that I found to be even worth making again.

The ingredients in this mix include things like rice flour, millet flour, tapioca flour, sorghum flour, and a few other specialty ingredients. In other words, buying all these individual flours and getting the mix right would be a crazy project so I’m good with just buying the mix on this one!

The packaging comes with a measured packet of yeast and you just mix that with some water and then add in a little oil and eggs. There’s an option for an egg free version also, but I went with the eggs.

Then stir in your mix and you’re pretty much done. To be honest, I thought it looked a lot like cookie dough. It was pretty weird for me to not have to knead pizza dough, but no gluten means no kneading necessary!

The instructions say to cover the dough and let it rest for 20 minutes which makes sense. This gives the yeast a chance to develop some bubbles and also just lets the dough relax a bit. It won’t really rise in this time, but it will just relax a bit.

You can’t really work gluten free dough like you do normal pizza dough. It doesn’t stretch so I recommend putting the dough between two pieces of plastic wrap and rolling it out a bit.

Then transfer it to a pizza peel (or back of a baking sheet) dusted heavily with cornmeal. The cornmeal will ensure the dough doesn’t stick later on. It’ll also help give the crust some extra crunch!

If the dough isn’t exactly the size you want after rolling, use wet hands to press it into shape (the dough is pretty sticky). You can see where I kind of worked my dough into a round shape on the peel.

Most importantly, it doesn’t have to be perfect! I made one large pizza out of the dough, but you could also make 2 smaller 12-inch pizzas.

While your dough is resting, I recommend heating up the grill. This dough mix is made for baking but I found it worked great on the grill and the crust turned a little charred around the edges which I really like.

Just preheat your grill to about medium-high heat and prepare it for direct grilling if you’re using charcoal (I did).

When the grill is hot, rub the grates with some neutral oil to prevent sticking and slide the pizza on!

There’s some amount of faith that must take place here, but that’s true for gluten free pizza in general I think so just go with it!

Cover the grill and let the pizza dough cook without any toppings for about 3-4 minutes. Then use a large spatula to give it a flip. Cook for another 3 minutes and then flip back over (you want to end up with the cornmeal on the bottom). This sort of just sets the dough.

This is after two flips and a big drizzle of olive oil.

At this point you could top the pizza with any toppings you want! I wanted to keep my version simple though to really test out the crust. I went with classic margherita toppings.

For a simple Italian seasoning I mixed up 1 teaspoon of dried oregano with 1/2 teaspoon of kosher salt. After I drizzle some olive oil on the pizza I laid down a layer of thinly sliced ripe tomatoes and seasoned them well with that mixture.

Then I added sliced fresh mozzarella (not the low moisture kind). Cover the grill again and let it grill for another 6-8 minutes until the crust is really crispy and the cheese is nice and melted. If you slice the tomatoes thin, they will start to cook down a bit and almost make a fresh sauce.

At this point is kind of an eye test game. If the pizza is grilling too fast, you might have to move coals around or reduce your heat. You don’t want it completely blackened on the bottom.

It’s done though when the mozzarella is gooey and melted and the edges are tanned and crispy.

As a final step, add on a good handful or two of fresh basil leaves. I kind of just ripped them up.

The basil leaves will wilt a bit from the heat, but don’t add them until the very end so they stay fresh.

Slide the pizza off using a peel or a large spatula. Let it cool for a minute or two and slice it up!

You know it’s a good pizza if you can hold a piece without a lot of drooping!

Laying Down the Truth

Okay. I’ll give it to you straight. I won’t say that this crust is as good as the gluten version. But, I think that’s okay because if you can’t have gluten, or if you’re hosting someone who can’t have gluten, then it doesn’t really matter. At the end of the day, this is your best option!

I can say that I happily ate this pizza and would choose it any day over some other half-assed gluten free option if that’s what it came to.

Everybody should get to enjoy pizza right?! 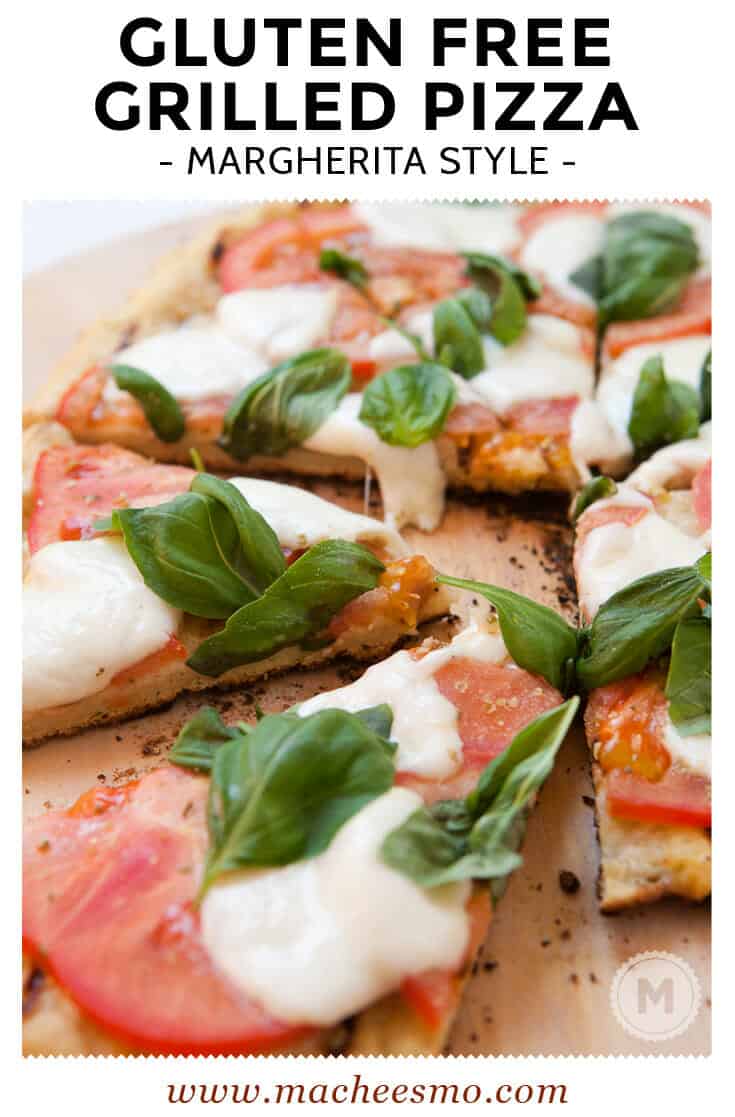