About a month ago, I started cooking breakfast once a week at a local homeless shelter. It’s been really challenging at times (waking up early, cooking for many), but it’s also been really fun and I’m starting to look forward to it every week.

So I thought I’d take a post and talk a bit about how I wound up with the gig and also go through some of the things I’ve made!

It Started With a Dinner

Betsy’s office hosts a dinner at the local homeless shelter once every few months and I went and helped out with the last one. I was blown away at the resources in this shelter. They had a top of the line kitchen with very nice Imperial stoves and ovens.

This, of course, is necessary when you’re feeding up to 200 people per meal.

So I made a mental note to reach out to the shelter and see if they needed any help cooking meals.

I definitely procrastinated on this, but eventually I got around to calling them up and scheduling a meeting with their volunteer coordinator. It’s not like I really had to apply for the job, but I think they wanted to make sure I was comfortable with the kitchen and with the number of people I’d be feeding.

After a brief chat, I was on the calendar. Every Tuesday. Cooking for about 90-100 people. By myself.

In short, it’s almost like I run a restaurant once a week that only serves breakfast and only has one thing on the menu which is whatever I feel like cooking on that day.

As you can imagine, there are a few challenges that come along with something like this.

Schedule – The shelter closes during the day so all of the people that stay there have to be out by 8AM. Breakfast needs to be served at 6:45 sharp. If I’m late, they go hungry. I’d say this is the most stressful part for me and generally means that I get there at around 3:30 or 4:00 in the morning to make sure I have plenty of time to get stuff prepped.

Supplies – I pretty much have open reign on whatever is available in the pantry on any given week. I can use anything I can find to make a warm, tasty breakfast. It’s a challenge for sure to find ways to feed 100 people every week, but so far I think I’m doing well.

My general rule is just to keep it simple. It also helps that I’m pretty decent at making things from scratch because they always have stuff like eggs, flour, sugar, milk, etc.

I also cheat occasionally and bring a few “bonus” things which I buy out of my own pocket to make the meal a little better. This is usually a special condiment or topping that they might not normally get like sour cream, cheese, or brown sugar. It costs me a few bucks but it’s worth it to give them something they don’t normally get.

Math – It turns out that it’s not always easy to multiple a recipe by 50 or 100. It sounds simple enough but the logistics of it can get pretty difficult, especially when I’m a one man show. For example, I’m getting really good at cracking eggs because I crack about 150 if I want scrambled eggs. 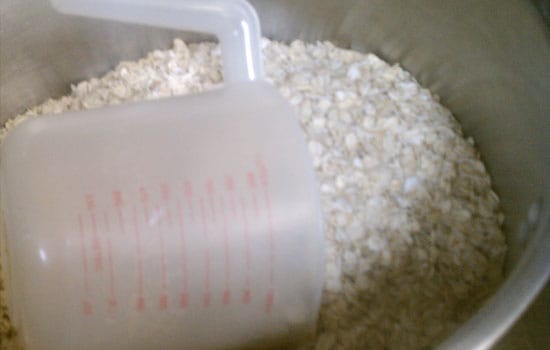 Here’s the four meals that I’ve made on my own since I’ve been working at the shelter! I would say that all of them turned out surprisingly well!

French Toast Casserole – My most ambitious meal so far. Eggs, milk, cinnamon, syrup, and nutmeg mixed with sugar and poured over crusty, stale bread. This casserole was so huge, it took about 2 hours to bake! I also made some (10 dozen) corn muffins while I waited for the casserole to cook.

Breakfast Sandwiches – Eggs scrambled with cheese, sausage patties (made by hand) and 200 pieces of toast.

Cinnamon Oatmeal with Bacon – This was the easiest meal I’ve made so far. About 40 cups of oatmeal cooked with a gallon of milk and a few gallons of water. Seasoned with cinnamon and served with butter and brown sugar. I made a bunch of bacon also.

I expected to see some weird things while doing this, but this shocker took me by surprise one day and made me feel like I was in The Twilight Zone.

Someone apparently donated crates and crates of eggs, all of which had double yolks! They were totally fine to use, but just kind of creepy!

Of course, what this is all about is the people. I had some misconceptions about the types of people that might be at a homeless shelter in a Colorado town, but what I’ve learned is that it doesn’t take much. A lost job. Medical bills. Or just a string of bad luck.

A good number of people who stay at the shelter actually work during the day which was a shock to me! They have jobs, but for whatever reason still can’t afford a place to stay. It’s very sad to see (especially the families), but at the same time it’s really rewarding to be able to give them a warm, hopefully tasty meal to start their day off.

Because their days will undoubtedly be harder than mine even though I woke up at 3:30AM.

So it’s the least I can do.

If anyone has any stories about volunteering or tips on how to get involved, please leave a comment!