Fruit on the Bottom Yogurt Jars

Betsy has become obsessed with fruit on the bottom yogurt during her pregnancy. She’s always been a big yogurt eater, but it has definitely ramped up in the last few months.

I wouldn’t call it a craving so much as a demand.

I noticed a few things after buying these yogurts with sugary syrup on the bottom.

First, they are more expensive than normal yogurt. This makes intuitive sense because there are added steps in packaging the yogurt. Betsy happens to like the most expensive brand in the store (more on that later).

Second, most brands use little actual fruit. It’s mostly sugary syrups. Of course they taste good because sugar tastes good. The brand Betsy is into actually uses pretty good fruit, but did I mention that they are really expensive?

These jars, on the other hand, are jam-packed with delicious fruit in a very light syrup. These jars cost me about half as much as the super-pricy brand. And they taste better. Go figure.

A delicious and easy way to make your own fruit on the bottom yogurt jars. So much tastier than store-bought and saves a bunch of money!

1) For blueberry sauce, combine blueberries, water, sugar, and cinnamon in a medium pot over medium heat. Cook until steaming and sugar is dissolved. If berries are frozen, continue to cook until they are thawed and almost bursting. Then remove from heat and let cool.

2) Stir together yogurt and honey.

Store jars in the fridge. They will keep fine for 1-2 weeks.

There are a bunch of high end yogurts hitting the shelves these days. Let me be clear… I have no problem paying for quality food. You can definitely do worse than spend your money on really good yogurt.

This happens to be the brand that Betsy likes (and it is really delicious). Just for a base, this 8-ounce individual container of yogurt costs $2.50.

There’s a hidden little secret in these guys as to why their yogurt tastes so much better than some other brands.

They put sugar in it. Pectin specifically… It makes the yogurt really creamy (pectin is the sugar used to make jam) and sweet. This container has 13 grams of sugar in it which isn’t a ton… for a soda.

There is naturally some sugars in yogurt but a normal serving of non-sweetened Greek yogurt will have about 9 grams in it.

OK. So they aren’t adding a ton of additional sugar, but it’s enough to make you go YUM!

Fruit on the Bottom Yogurt: The Homemade Version

I wanted my jars to be super-packed with fruit. I used an entire 16 ounce bag of frozen blueberries for mine which means each jar would end up with two ounces of fruit in it. That’s a lot!

I added a little sugar and cinnamon to them and just simmered them lightly for a few minutes.

You don’t want the blueberries to break down really. It’s nice when they are whole still in the jars.

This was my finished syrup. When I was spooning this into the jars, I left most of the liquid behind and just tried to get mostly berries.

Whatever you do, let this syrup cool down before making the jars. You wouldn’t want to add this hot syrup to a jar with yogurt.

I decided to cheat on my yogurt also!

I added a tiny bit of honey to it which really makes a difference to the flavor. If you buy a big container of yogurt, it’s very reasonably priced and you can make a lot of jars!

Then just layer them to your liking!

I like to spoon some fruit in the bottom, add about 1/4 cup of yogurt, then more fruit, then more yogurt. You get the idea.

Top these with some slivered almonds (optional) and screw on the lids.

These will keep beautifully for 1-2 weeks in the fridge. There’s no way they will last that long though. I’ve found myself snacking them for breakfast or even dessert!

You can re-use the jars and lids since you aren’t actually canning them.

I calculated that one of these big beautiful jars cost me about a buck to make at home.

That’s a pretty good deal in my book. Obviously you can change up the fruit as well although blueberry is definitely my favorite. 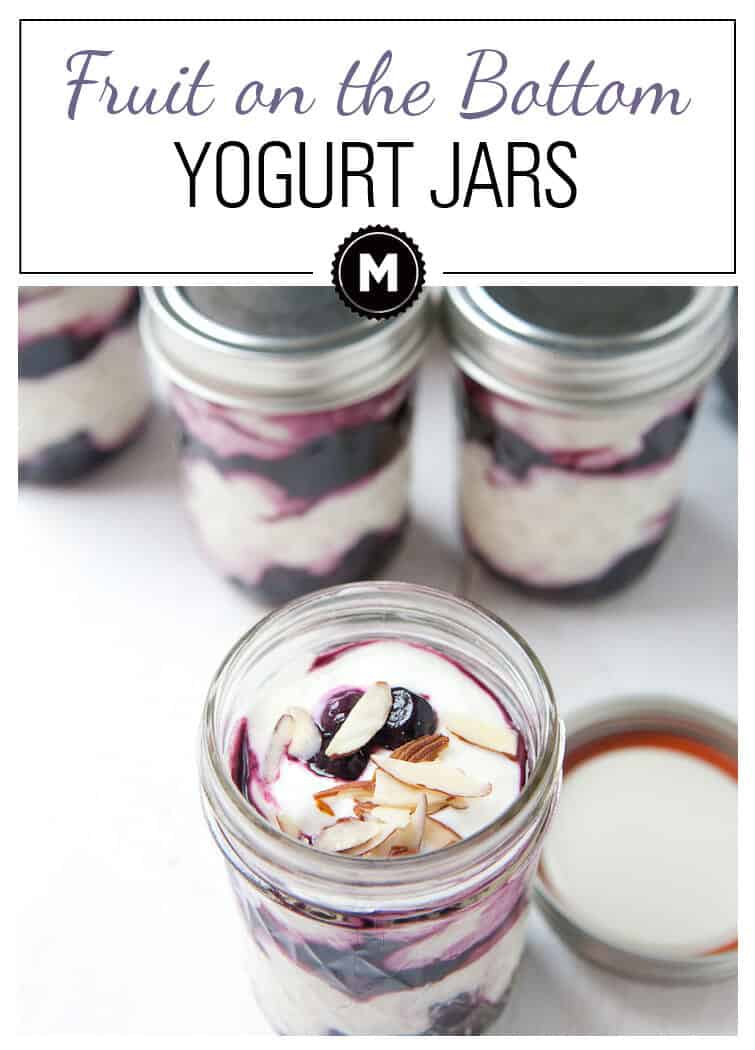 Are you a fruit on the bottom fan?! Leave a comment!