Tonight is a big night. As you might have heard, I’m going to be one of the home cooks on the new, hit NBC cooking show, “Food Fighters.”

Well, my episode airs tonight at 8/7c on NBC!

It’s going to be a crazy hour of cooking.

Read on to learn more about the show and also a sneak peak of my episode!

If you haven’t watched an episode of “Food Fighters” yet, you can catch up on the NBC website, but essentially, the show combines compelling competition and game show fun with a cool twist – giving every day home cooks a once-in-a-lifetime chance to compete against world class chefs in the ultimate culinary showdown. 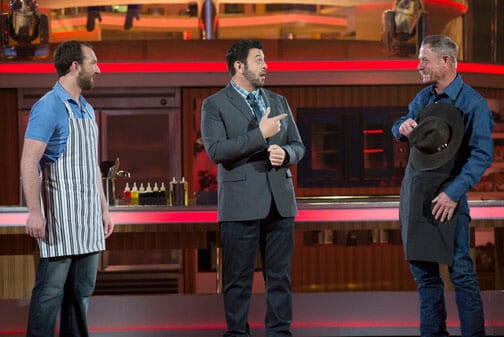 NBC gave me permission to share with you the five chefs I went against in my episode. Keep in mind that I had no idea which chefs I would be going against until they walked through the door!

In no particular order:

Elise Wims– Known as “The Diva Chef” was featured on Hell’s Kitchen Season 9.  She is known for her Italian and Creole fusion.

Kent Rollins– Chuck wagon cook who specializes in western cooking and grilling. Don’t let the cowboy hat fool ya. The man can cook.

Each one of these chefs will have a prize amount associated and if I beat them in the “food fight,” I’ll bank that amount of money! And, because there has been some confusion, if I lose a round, it doesn’t mean that the game is over. It just means I don’t win the money for that round.

The Dishes I Make

Eggs Benedict – I make mine with smoked salmon on puffed pastry for a lighter twist on the classic.

Veggie Burger and Fries – I use a lot of various mushrooms to make a super savory veggie burger. The host of the show, Adam Richman, called it one of the best veggie burgers he’s ever eaten. I served it with sweet and spicy sweet potato fries because why not?!

Mashed Potato Pizza – One of the first pizzas I ever learned to make. It’s a strange regional dish that I’ve really only seen in New Haven, CT. Now it’s going national though!

Here’s a quick preview of the show tonight!

And here’s another preview of the Mashed Potato Pizza battle!

I can’t even begin to say what a cool experience this show was. It was amazingly stressful and competitive, but at the same time one of the most fun days of my life! I can’t wait to see the final product tonight!

84 Responses to “The Food Fight Tonight!” Leave a comment