Here’s a riddle: Say you planned a dinner party for four people on a nice Spring day. You bought some meat to grill and a few sides. At the last minute, your party doubled to eight people!

How can you feed all those extra people without buying any more main ingredients?

The answer is to pick up some flour tortillas and turn your dish into burritos! Burritos are one of the best ways in the world to extend ingredients. I use them all the time for leftovers or if I want a cut of something to go a long way.

It’s really pretty straightforward to make a decent burrito, but if you want to make an exceptional burrito, there’s a few tricks you may need to know!

Perfectly grilled flank steak chopped up and stuffed in a burrito with tons of fixings.

1) Rub spices all over both sides of flank steak.  Don’t go light on the seasonings!

2) Grill steak for 4-5 minutes per side on high heat for medium rare steak.

3) Let steak rest for 10 minutes and then slice across the grain.

4) TO prep burritos, set up steaming basket in a large pot with 1/2 inch of water.

5) Bring to a simmer.  Then add tortilla and cheese.

6) Cover and steam for about 30 seconds.

7) Remove tortilla and pile high with steaks and other toppings.

Flank steak is one of my favorite cuts of beef to grill. It’s fairly economical, easy to season and assuming you grill it and cut it correctly, it can be just as tender and delicious as a cut of meat two or three times its price.

When seasoning a flank steak, I recommend going pretty heavy on it. For this steak, I used some pepper flakes, paprika, and a good amount of salt and pepper. Season both sides really well.

After this is seasoned, crank your grill up to high and once it’s very hot, grill the steak for about 4-5 minutes per side.

If you don’t have a grill, you could also broil this guy for about the same amount of time. You want a nice char on both sides of the steak though.

As you’ll see, I like my steak to be medium rare. If you like it medium, add on another two minutes to the cooking time per side. If you like your steak cooked more than medium, I can’t help you.

Just kidding, but I think you get the idea. The only real way to know what doneness your steak is though is to touch it. If you compare the feel of the steak to the below thumb chart, it’ll give you a pretty good idea of how your steak is cooked. Remember that a steak will become more firm as it cooks longer. 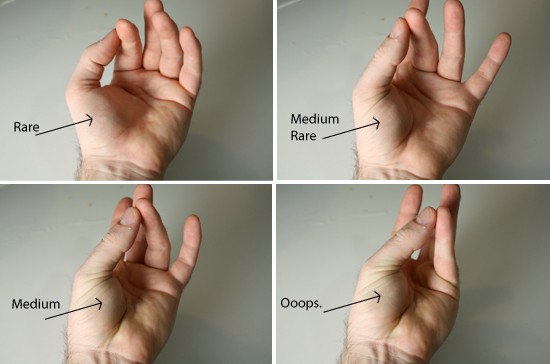 After your steak comes off the grill, let it rest for about 10 minutes. This is really important. Don’t try to slice this guy before letting it rest.

When you’re ready to slice it, be sure to slice it against the grain. So in this case, I sliced mine basically following the grill marks in the above photo.

One of my favorite burrito carts in DC steams their tortillas with the cheese on them. They had a special system for doing this, but it created awesome results. First, it made the cheese super-melty which is important. Second though, it made the tortilla really flexible so it could hold more!

So I figured out a way to steam my tortillas at home. This isn’t an essential step, but it’ll take your burritos to the next level. Start by pouring about 1/2 inch of water in a large pot. Then put in a steaming basket like you would normally use for vegetables.

The important thing to remember here is that you don’t want the water to touch the tortilla or it’ll end up being really soggy. So make sure you have a good amount of space between the water and the bottom of the steam basket.

Then place the tortilla with grated cheese on the basket!

It’s hard to tell from the photo, but you want to add the tortilla when the water is already steaming. Basically, you want to keep the tortilla on the steam basket for as short a time as possible.

It’ll probably take about 20-30 seconds for the tortilla to steam and the cheese to melt.

At some point, you’ll want to prep a few other toppings also!

Should be pretty straightforward to finish these guys once you have the steak grilled and the burrito steamed.

One tip though. When you’re taking your tortilla out of the steamer: USE TONGS. It’s really hot.

Then lay your chopped steak right on the cheese.

Add on any other toppings that you like. I kept my first one pretty straightforward.

Then fold the ends in and roll it up! I think you’ll find that you can really stuff these very full and the tortillas won’t rip like they will sometimes do. The steaming leaves them flexible and sturdy!

I chopped mine in half just so you could see all the deliciousness inside.

My official Macheesmo taste tester said that these could use some rice. I thought they were pretty good without rice, but I can see her argument.

But I think you get the idea. You can put almost anything in these guys.

The trick is in the steam though!