After writing this post last week and getting lots of excellent advice on how to prepare for a move, I ignored most of it and became swamped in the physical details of moving all of our belongings approximately two blocks to our new house.

Betsy and I ended up eating mostly pizza, chinese take-out, and sandwiches washed down with lots of cheap champagne and cheaper beer.

The last 48 hours have been a rush to unpack, organize, and settle the pets who still haven’t learned that stairs just take you to another floor, not another world. It’s a freak-out any time we go up or down because we may never come back.

Betsy is the queen of unpacking and organizing new homes. If she wasn’t so good at lawyering she could probably start some sort of organizational consulting company and clean up. (punny)

We’ve moved many times together and both of us were more stressed than normal about this move I think because it seemed more permanent than previous moves. This isn’t just a place we sleep, but it’s our home now and for the foreseeable future.

When I unpacked something, it seemed more important. Is that really where that globe should go? Forever?

Even after all the unpacking and organizing, even after getting Internet and cable setup, this new home didn’t actually feel like home until I cooked something.

No doubt I was tired and a part of me was like, Screw it – let’s get delivery, but I wanted to use a damn pan to make real food.

Even though I didn’t have my camera equipment setup yet, I figured I would snap a few photos of this first meal. It almost certainly will not be the best thing I cook in my new kitchen, but it seemed significant.

This dish was barely a recipe and so I won’t bother writing an official one. I started by chopping up this pretty Chinese eggplant I saw at the store. I’ve actually never cooked one of these before but I figured if I put it in a pan with some spices it would be not terrible. 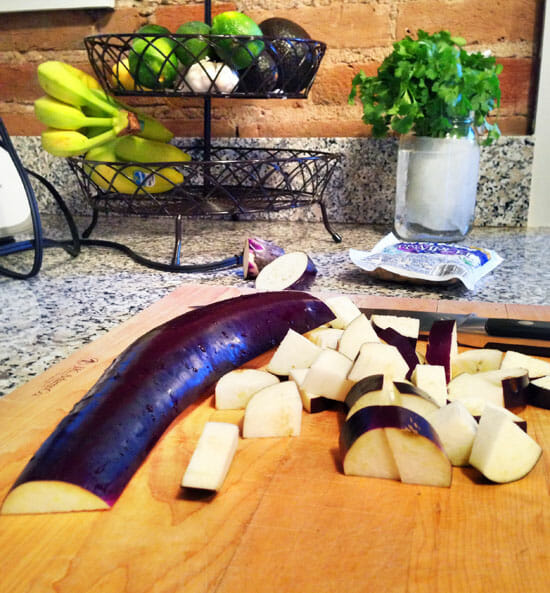 So that’s what I did. I added some oil to a skillet over medium-high heat and sprinkled the eggplant with some salt, pepper, cayenne pepper, and five spice powder while it sauteed. 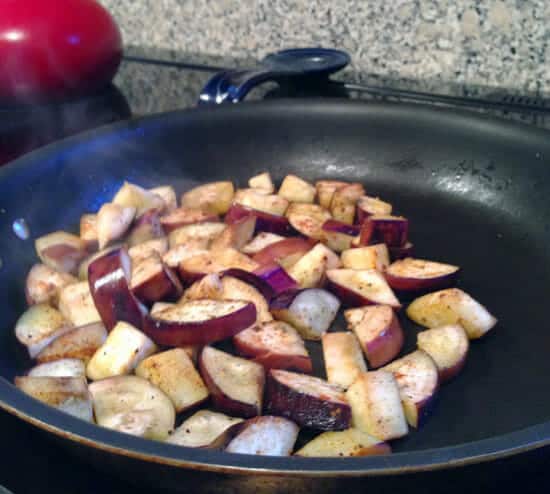 Just because Betsy and I had been eating a lot of meat over the weekend, I decided to sear some tempeh with the eggplant to give the dish some protein.

Again, nothing tricky here. I diced it up and put it in the pan with some oil and salt and pepper. 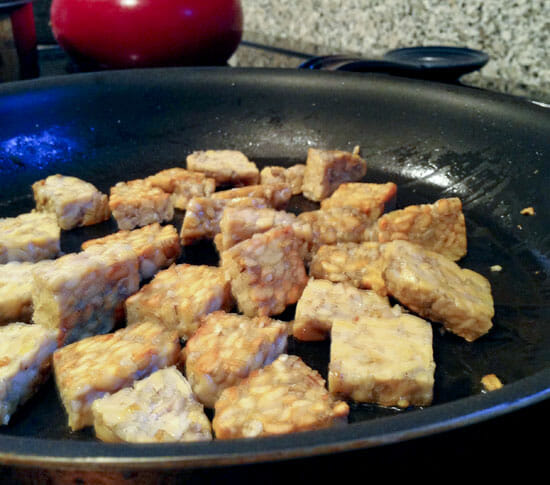 The I just piled that mixture on some cooked couscous and topped it with a little yogurt sauce (Greek yogurt, lime juice, maple syrup, sriracha). Adding the maple syrup was key. It gave the dish a tiny bit of sweetness that balanced out some of the bitter flavors.

I topped it with fresh cilantro and sriracha. Dinner is done. 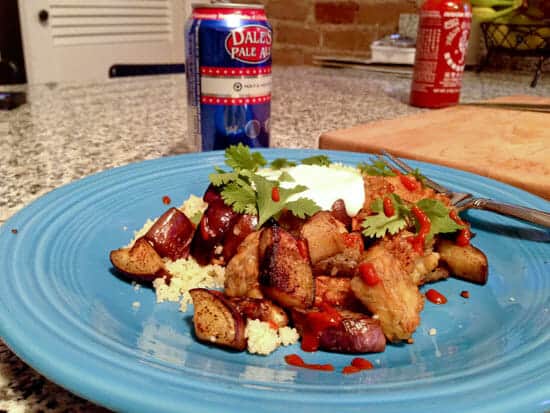 It’s really nice to have a decent confidence level in the kitchen. I didn’t really feel the need to look up a ‘recipe’ to make this dish happen. I was tired and just went with my gut and it ended up being the best thing we had eaten all weekend.

It also reminded me of the importance of a well-stocked pantry. The only thing I had to buy for the meal was the eggplant and the tempeh.

I plan on sharing many excellent (and probably prettier) meals with you all from this kitchen.

No doubt you’ll be seeing a lot more of my granite countertops and brick-walled kitchen. I also plan on doing a snippet post in a week or two and give you all the official house tour.

Mostly though, I just wanted to write this post because I like talking to you folks. I feel very lucky to have a lovely new home both in the real world and on the Internet.

Do you remember the first meal you ate in your house after a move?