At the beginning of every month in 2009, I am writing a post detailing some specific things about food in the upcoming month.

February. The shortest month of the year, but also one of my favorites. Mainly because my birthday falls in February and it is also the last really cold month in DC. March starts to get warm and Spring isn’t too far away.

What to Eat in February

In terms of climate and food, there isn’t a lot of difference between January and February and all of the foods that I discussed in January’s Food Letter are still perfect for February cooking. The only exception might be the pears. They may not be quite as juicy this month. 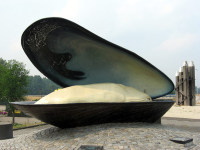 Mussels. There is a saying that you should only eat shellfish in months with an “R” in them. Basically, this would leave out the hot summer months when shellfish could go bad faster. In modern times of refrigeration, this isn’t such a concern and you can eat them year around.

That said, I still find that they are much better in the Winter. There is something completely warming about a large pot of mussels and some crispy bread or frites. I’m planning on making some Macheesmo mussels in the next few weeks, but here are a few recipes to get you started.

Grapefruits. Back in college, I used to eat about a grapefruit a day in the Winter months. They are usually most ripe in the January to April months. Having a grapefruit every morning for breakfast is a great way to start your day.

My favorite thing to do with a grapefruit is to eat it just like it is or maybe incorporate it into a fruit salad, but if you are feeling creative, there are some interesting things you can do with these large citrus fruits.

Chard. I haven’t posted any recipes using chard, but I’ve been using it quite a lot recently to spice up something like a normal pasta dish. It’s a really fantastic, hearty green that integrates well with a ton of things.

There are a bunch of different varieties of chard also which can be used to give your dish different colors and slightly different flavors. Here are a few awesome recipes I found.

Cabbage. Cabbage is pretty under-rated in my opinion. Most people probably think of it as the main ingredient in coleslaw, and it is, but can also the main ingredient for a few other awesome dishes. Two of my favorite are corned beef and cabbage and traditional dumplings.

Valentine’s Day. One of the most celebrated (or hated) holidays in America is Valentine’s Day. A lot of people like to go out to dinner on this day and in my opinion that makes most restaurants absolute mad houses. These days I prefer to cook a meal and have a nice bottle of wine and call it a day.

I’m planning on making a whole Valentine’s Day menu next weekend and posting the whole thing on Macheesmo. This means that Betsy and I will be celebrating Valentine’s Day twice basically. Oh the sacrifices I make for Macheesmo…

Bring on the beads. On the 24th, Mardi Gras starts and while I’ve never actually been to the celebration, I always use it as an excuse to have a few hurricanes and eat some good food. The traditional hurricane has passion fruit syrup in it which is kind of hard to come by. Sometimes you can find it in Latin markets though. There are tons of variations on the drink. Check this out for some options.

That’s it for this month. Everyone have a happy February. If you have any February food ideas, leave a comment. Have ideas for March? Send me an email!