As I cook more and read more about food and cooking, one statement that I come across a lot is the following:

I’ve said it, I’ve read it, and I’ve heard people talk about it. But when it comes down to it almost all the foods we eat are processed to some degree (unless you pick your food from your garden). Even things that are one simple ingredient (rolled oats) are most certainly processed.

Clearly though oatmeal isn’t what people are talking about when they talk about processed foods. If you look at the nutritional data, you’ll know they are talking about Twinkies. But if you’re trying to eat less processed foods which I think most people would agree is a good thing, then how do you know what foods are more processed and which processes are actually bad for you?

Michael Pollan, for example, says in his book In Defense of Food, that you should try to eat foods with under five ingredients listed in the nutritional data. I think that’s a good rule and will keep you generally out of trouble, but it’s pretty arbitrary when you look at it. It’s definitely possible to have a processed food with more ingredients than that and it could be healthy for you. More importantly, there are foods with less ingredients that are not at all considered healthy – soy sauce for example – delicious, but not great for you.

As an eater, I don’t want to restrict foods that might be healthy for me based on some number, but at the same time I want to be careful about the processes and ingredients that I do eat regularly.

I think the answer lies in that little boring box on the side or bottom of almost everything you can buy: The Nutritional Data and Facts. Unfortunately, I’d say that most people probably overlook this little box. After all, there’s no real obligation to make this box exciting or interesting or, heck, even easy to read. It just has to exist.

But if you know what to look for on this box, you can quickly identify whether or not the processed food you’re holding is actually okay to eat, regardless of number of ingredients.

So in this post I want to take an example nutritional data panel from a common product and see if I can figure out what’s really going on. I don’t want to actually say the product or brand just because it’s not really important and I don’t want people to focus on it (although bonus points if you can guess it). At the end of the day, I’ll try to answer just two questions:

1) Should I regularly eat it? 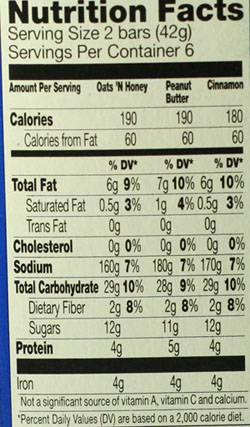 The first part of these nutritional facts is the breakdown of the nutrients in the food. Honestly, I think the most important part of this chart is right at the top: serving size. A lot of times food manufacturers will change this around so that the information below is more favorable.

So make sure you check out the serving size compared to what you are actually eating.

As far as the rest of the information goes, I’d say the most important thing is to basically ignore the percentages. If you want to get serious about dieting, know how many grams of protein, sodium, carbs, and fat you should be getting everyday and then use those numbers.

The percentages on these charts always assume a set 2000 calorie diet and based on your age, health, and goals, your specific needs may be way different than what this chart assumes.

Someone correct me if I’m wrong, but I’m pretty sure there’s a major typo in the charge on the right. I think they mean 160mg of sodium… not 160g. Ignoring the fact that 160g of sodium would send you straight to the hospital, the whole serving size listed is 42g. So that’s actually impossible, but I guess I won’t write a letter to the manufacturer.

In fact, if you get nit-picky, you’ll notice that the number of grams listed under the nutritional data don’t even all add up to the grams in the total serving size. If you add up all the grams listed, it’s over by about a gram. That’s because they can round when they make these charts so don’t freak out about it.

For me, I usually just glance at this table to get a general idea if my food is particularly high or low in any one category and also I note the serving size for the thing I’m eating. 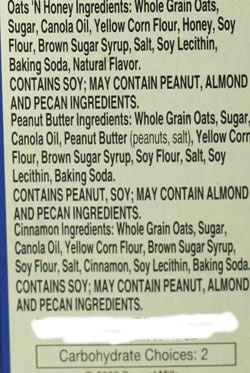 The second part of this facts panel is the ingredients. Manufacturers are required to list all ingredients that are in the food, but I think there are some exceptions regarding flavorings and stuff, possibly for trade secret reasons.

The important thing to know about this section is that the manufacturer doesn’t have to tell you how much of any one ingredient they use, but they have to list them in order of amount.

Anyway, for me, this is the real bread and butter section. After all, I want to know what I’m eating. Let’s just break down the one from my product. I’m only going to do one of the varieties because they are all basically the same.

Whole Grain Oats: I know what those are! I eat them most mornings for breakfast! It’s a good sign that a whole grain product is listed very first.

Sugar: Well, sugar is a prominent ingredient which doesn’t really bother me that much, but it’s not the best thing in the world.

Canola Oil: I have nothing against canola oil. I use it all the time. But for this product I’m not really sure why it’s so high on the list.

Yellow Corn Flour: Actually an interesting ingredient. Doesn’t bother me at all.

Honey: I love honey. I’m a bit confused why they use honey and sugar. I guess maybe using all honey would be too expensive.

Soy Flour: I’ve never really seen soy flour, but apparently it gives moisture to baked products so it makes sense that it would be an ingredient here.

Salt: I’m cool with salt for sure.

Soy Lecithin: The first odd sounding ingredient in the list. I’m not sure what Lecithin is. It’s apparently used as an emulsifier so I guess it helps stuff mix together. It’s definitely far from food in my opinion.

Natural Flavor: Who knows what the hell this could be.

So that’s the run down. For me, it was actually really interesting to go through all the ingredients in this product. To answer my two questions… 1) Yes. I think I would eat this regularly. It’s not perfect, and it has a bit too many sweeteners, but it also has a lot of whole grain oats which is good. 2) I think I could definitely make a better version at home. In fact, I have.

So, do you know what my mystery product is?

More importantly, did you like this post? Should I do this kind of breakdown on other foods?