I’m always curious about recipe names, especially when those recipes are named after a place. The ubiquitous Denver omelet, for example, always includes peppers, onions, ham, and cheddar cheese. As far as I can tell, it also has nothing to do with Denver, but probably has solid roots in chuck wagon cooking.

Was it created here? Not that I can tell.  Does it use ingredients specific to the region? Not at all. But, is it delicious? Absolutely.

If you’re feeding a crowd though, it can be a bit brutal to make a bunch of omelets, especially if you want to serve it all at once.

These little breakfast sliders are the perfect answer though. They fold in classic “Denver” flavors and you can make a big batch of them so people can then make their own sandwiches!

Classic Denver omelet ingredients baked together with lots of cheddar cheese and served on breakfast sliders!

1) Preheat oven to 350 degrees F. Dice onion, pepper, and ham. In a large skillet add a drizzle of oil over medium heat. Cook the ham and veggies together for 5-6 minutes until ham is lightly browned and veggies are soft. Season the mix with red pepper flakes, salt, and pepper.

2) Lightly butter an 8×8 baking dish. Whisk together eggs and pour eggs into the baking dish. Sprinkle ham mixture over the eggs.

3) Bake the eggs at 350 degrees F. for about 20 minutes until they are just set in the middle.

4) Sprinkle eggs with cheese and return to oven to melt just (just a minute or two).

5) Meanwhile cut slider buns in half and lay out on a baking sheet. Toast for a few minutes.

6) When eggs are done, remove from oven and cut into 9 even squares.

Peppers and ham are pretty much a must for me, but I also like some red onion in mine as well. These are simple ingredients. There’s no reason to over-think it or use anything too exotic here.

Dice everything finely and then cook it down in a skillet with a drizzle of oil, some red pepper flakes, salt and pepper.

Let this all cook until the ham browns slightly and the veggies start to soften, about 5-6 minutes.

Instead of folding this mix into individual omelets, let’s just make a big old batch of the stuff. Because I opted for smaller sliders, you don’t need a full egg for each sandwich. I used 8 eggs for 9 sliders and that was about perfect.

When you’re ham mix is cooked, lightly butter an 8×8 baking dish and then pour in your scrambled eggs. Sprinkle the ham mixture evenly over the eggs.

This will need to bake for about 20 minutes at 350 degrees F.

When the eggs are just set in the center, sprinkle on some good cheddar cheese and return it to the oven to melt.

Okay. Here’s the easy (and fairly smart) part. When the eggs are done and the cheese is melted, just cut this dish into 9 even squares.

Each square becomes perfect for a slider!

Then just toast up your slider rolls and let people sandwich the egg mixture between the buns.

(If you wanted to, you could double the ham, peppers, and onions, use a full dozen eggs, and bake it in a 9×13 dish and probably get 16 sliders out of the mix!) 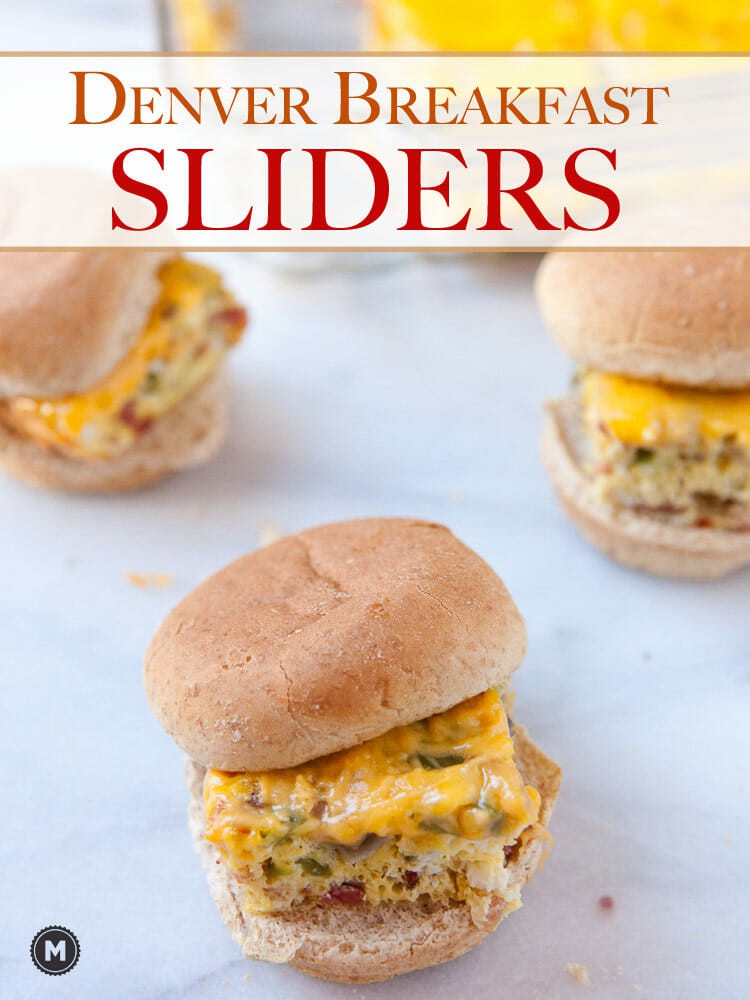