Every month in 2009, I am writing a post detailing some specific things about food in the upcoming month.

I can’t believe that I’ve done 12 of these now. It’s definitely been a fun project to think about what sorts of foods are in season throughout the year. Also, I’ve found a ton of great sites through searching for recipes for each ingredient. I’m going to create some sort of archive for these things so people can easily refer to them if they want.

What to Eat in December 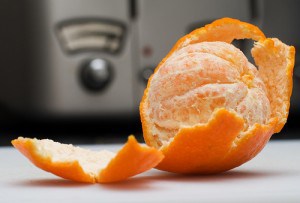 Clementines – If your stores are like my stores, they are now selling these small guys in huge crates. I always love buying them. They are a quick and healthy snack, but it’s always a race to eat them all before they go bad!

Ginger Infused Clementines with Cloves – A few minutes of cutting and cooking with very tasty results. (@ Lucullian Delights)
Spicy Carrot and Clementine Salad – I really like shredded carrot salads. Very under-rated in my opinion. (@ Fat Free Vegan Kitchen)
Clementine Cake – This will polish off some of those extra fruits. (@ Jenny Mac’s Lip Smack)
Caramelized Bay Scallops and Clementines – I’ve never thought to pair seafood with these guys, but it makes perfect sense. (@ Zen Can Cook)

Celery – Rarely the star of the show, celery is one of my favorite ingredients. I love to snack on it and it’s almost essential for a good stock.

Chicken and Dumplings – One of my favorite winter dishes. Gotta have celery for it!
Celery Soup – I’ve never had a celery soup before. I bet this would be good warm or cold. (@ One Perfect Bite)
Baby Celery and Mushroom Salad – I’m not sure that I’ve ever seen baby celery, but Greg recommends just using the tiny celery stalks on the inside of a normal bunch. (@ sippity sup)
Jalapeno Margaritas – The celery leaves here really work to cool down the spice I bet. (@ Food Network)

Squid – Normally found battered and fried in sports bars in the U.S., squid is one of my all time favorite seafoods. It’s very subtle and can be savory or even slightly sweet. It’s kind of finicky to cook, but once you get the hang of it, you’ll never go back. Also, because most Americans seem to be scared of the stuff, it’s incredibly cheap if you buy it in a store.

Calamari Salad – This might be kind of hard to make in the winter, but you might be able to figure out a way to approximate it. Maybe just leave out the tomatoes and add some roasted peanuts. The flavors are awesome.
Calamari Noodles – Nice technique on cooking calamari. (@ Dishing up Delights)
Seafood Risotto – Wonderful looking saffron risotto. Calamari is just a part of the seafood additions. (@ Culinary Adventures of a New Wife)
Grilled Calamari – Oh if only I had a grill I’d be making this over the weekend for sure. (@ Foodo del Mundo)

Lentils – When someone asks me for advice on how to start cooking, one of the first things I tell them is to make a pot of lentils. They are hard to mess up, really economical, and can be made a thousand different ways. Gotta love them.

Macheesmo Lentils – I’m constantly playing with this recipe, but this was a pretty solid version I cooked up a few months ago.
Spicy Lamb with Lentils – This recipe looks nothing like a disaster as the site name might lead you to think… (@ Culinary Disaster)
Potatoes and Lentils – A curried lentil dish from one of my go-to cookbooks. Great photos! (@ My First Kitchen)
Smoked Pork Belly with Lentils – A guest post from one of my fave bloggers on one of my fave sites. (@ Thursday Night Smackdown and No Recipes)

National Brownie Day (Dec. 8th) I think the realness of this holiday might be questionable, but I’ll take any excuse to make a brownie. You should too.

Chanukah (Dec. 12th) It’s the festival of lights people! Your guests probably wouldn’t complain if you made some celebration bread rather than the normal challah.

Festivus (Dec. 23rd) If you aren’t a Seinfeld watcher you may be unfamiliar with Festivus. But basically, it’s a holiday “for the rest of us.” Check out this clip for some good laughs. I once went to a Festivus party and almost won the marshmallow eating Feat of Strength. Turns out some people are very good at eating marshmallows…

Christmas (Dec. 25th) Honestly, I don’t usually make a huge deal out of Christmas. I see it more as a time to hang with the family than anything. So that’s what I’ll be doing on the 25th! Expect some snow covered photos from Wyoming!

Photos by simpologist and photobunny.