Betsy and I had a whirlwind month over the last four or fives weeks. We were both out of town a lot, but not traveling together. When we are in town together, we’ve both had really busy work schedules.

So it kind of felt like we were two ships passing in the night.

We decided to right the problem a few weeks ago by having a dedicated date night. No movies or dinner out though because that’s exactly what we had been doing too much of over the last few weeks. So we stayed at home, came up with a fun menu together, and just relaxed.

I thought I’d share some of the stuff we ate on our very fun date night!

It Was Betsy’s Idea

Betsy came up with a great idea for a date night menu. Instead of having one big meal, she wanted to have a bunch of smaller plates. Kind of like tapas I guess, but mostly appetizers that we could just kind of snack on all night long.

This sounded like a great idea to me! We went to a few stores together during the day and shopped for fun snacks that we would eat later in the night. Betsy never goes grocery shopping with me so it was a nice change to shop together.

For kind of a starter dish to our meal of starters, I set out some olives, roasted, marinated garlic cloves, a wedge of soft truffle cheese (Betsy loves truffles), and some crackers.

I also prepped one of my favorite appetizers: Radishes and butter.

It might sound strange, but it’s really good. Make sure to use a really good European style salted butter. It’s an awesome dish.

One of the fun things you can do if you want to plan a night like this is pull out special foods that you might have from trips. We pulled out a small bottle of this stuff called “Mosto cotto” from our honeymoon to Italy.

From what I could tell, to make this stuff they just take a bunch of Sangiovese wine and slowly simmer it down for about 18 hours. The result is a thin syrup that’s sweet and tangy at the same time.

You could pour this stuff on your shoe and eat it, but it’s really tasty on cheese.

I cubed up some romano cheese and drizzled the mosto cotto over the top. Tasted just like it did in Italy!

The most substantial parts of our date night meal was a bunch of different crostini that I made. I pretty much took most of these ideas from the most recent Bon Appétit issue which gave six or seven really great crostini ideas.

One of the most important parts of making good crostini is to make sure the bread is cooked well.

Ideally, you want a very crusty exterior and a soft interior. The best way to do this, that I’ve found, is actually on the grill.

Just get your grill super-hot, rub the grates with some olive oil, and toss on the sliced bread. Any baguette will work great for this.

I made three different kinds of crostini. The nice thing about these is that they all took just a few minutes to prepare once the bread was ready.

The first was a Mexican inspired crostini with Mexican crema (basically sour cream except a bit lighter), grilled corn, and fresh cilantro. 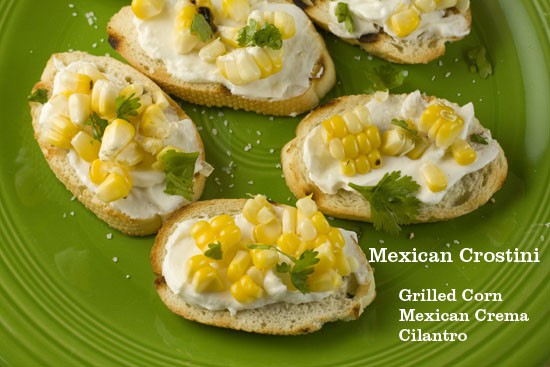 The second one was a standard caprese style crostini with mozzarella, basil, and tomatoes. 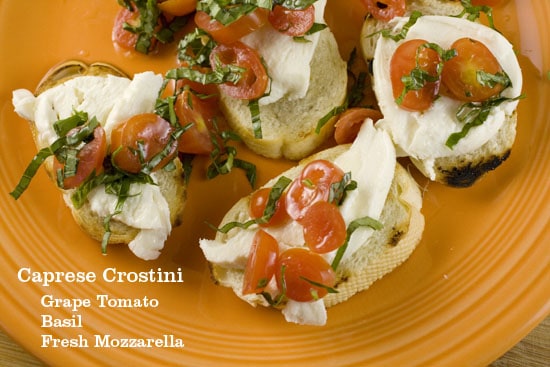 The most ambitious one that I made had fresh ricotta cheese, ripe peaches, prosciutto, and honey.

It was pretty amazing. 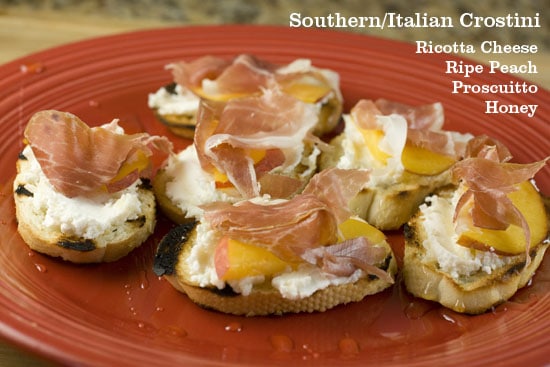 Set all these plates out with some fresh cherries and a big bottle of red wine and date night is served!

I was worried that I wouldn’t be full after this, but it worked out fine. The crostini were all pretty filling and since we had been snacking all afternoon on cheese and olives and stuff, it was the perfect amount of food.

The nicest thing about doing a date night like this is that all of the dishes were really quick to make (and clean up). I wasn’t toiling away in the kitchen for hours or anything.

Hopefully, this gave you all some ideas that you can use for a date night or just as a fun appetizer for a party or something!