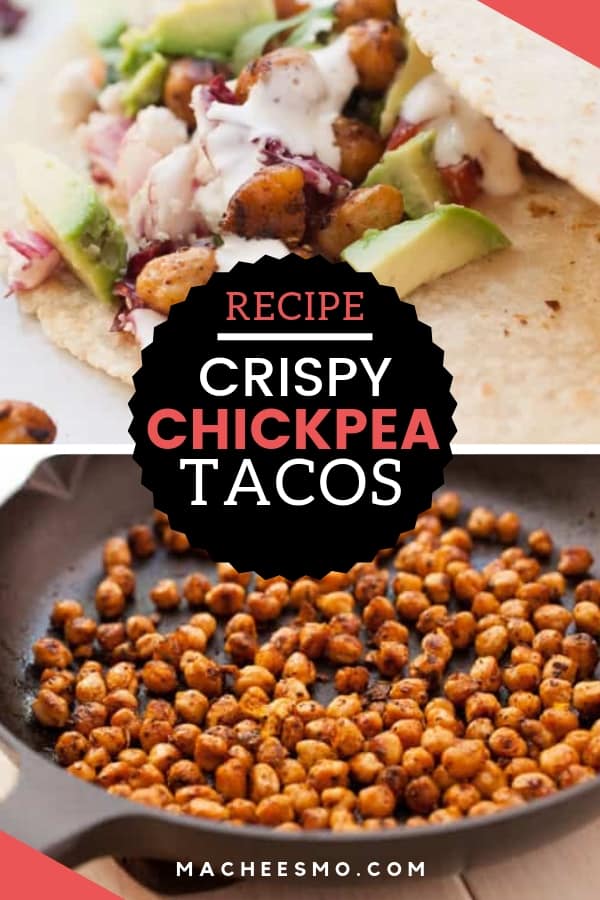 Tex-Mex is always a standard fast dinner in the Macheesmo house. I’m a carnivore through and through, but sometimes a delicious vegetarian taco can fill my taco cravings. It has to be big on flavor though! These Crispy Chickpea Tacos hit all the right marks: Crunchy and spicy with plenty of bright slaw and creamy sauce.

I usually roast chickpeas if I want them crispy, but I wanted these tacos to be super fast so I thought I’d try just cooking them in a hot pan for a few minutes. It worked great and made this into a solidly under-30-minute dinner.

If you’re in a Tex-Mex rut, give these chickpea tacos a shot. They are a nice switch from the standard taco bar.

I’m all for using dried chickpeas. I actually prefer the texture of them and they are much more economical than canned chickpeas. Of course, you make up for that in prep time. You have to soak the chickpeas and simmer them for an hour or so until they are very tender. Alternatively, you could cook the chickpeas in a pressure cooker, but it’s still a fair amount of work.

Given that there is enough other stuff going on in these tacos, I would recommend starting with canned chickpeas for this one. There’s not much better than opening a can, crisping them up in a skillet, and dinner is done!

Unless you are cooking dried chickpeas for something else and can just add a bit for these tacos, I’d stick with the can for these!

How to make crispy chickpeas in a pan

You obviously don’t need to cook the chickpeas. You could eat them raw, so you’re more looking for a color/texture on the chickpeas and to give them some crunchy texture.

For the chickpeas, rinse them well and then toss them with the olive oil and spices. You can go big on the spices here! Chickpeas can hold up to a lot of spice so don’t hold back.

While you can make crispy chickpeas in the oven (or air fryer), for this recipe I actually just prefer a plan old skillet because it’s fastest and it gives the chickpeas direct heat which gets them very crispy. Add them to a skillet over medium heat and cook them until they get browned and crispy on the edges.

How to make crispy chickpeas in oven

If you are doubling or tripling this recipe, it might be worth it to move to making the crispy chickpeas in the oven rather than on the stovetop. If you choose this method, preheat your oven to 375˚F and toss the chickpeas with the same spices as above. Line a baking dish with parchment paper for easier cleanup and roast the chickpeas for 20 minutes. They should get really nice and crispy.

Side note: If you just want a nice crunchy snack that isn’t potato chips, roasting chickpeas in the oven like this is a great alternative!

Okay, now that we have the chickpeas under control, let’s move on to the rest of the taco.

There are three parts to these tacos. None of the parts are particularly difficult and all of them bring something nice to the table.

I also like to toss in some crumbled queso fresco so this becomes almost like a salad that’ll go on the tacos.

Such a great mix and really nice colors.

Taco time is pretty straightforward now. Spoon in some crispy chickpeas, scoop some slaw on top, and drizzle the whole thing with sour cream sauce and fresh avocado.

These crispy chickpeas tacos are really different and a breath of taco fresh air. Give ’em a try!

How to make these tacos vegan

If you want to make these tacos vegan, it’s not hard to do at all. First, leave out the queso fresco from the slaw. You don’t really need it. I don’t think I would even bother substituting it with vegan cheese.

For the sour cream sauce, use a vegan sour cream like coconut cream. It’ll taste great with the lime and tacos. Maybe add a pinch of cumin to it to bring out the tex-mex flavors.

The thing that falls apart the fastest in these tacos is the slaw. It starts to wilt and get sad after a few days in the fridge. Just plan on that happening if you are storing the filling.

Also, the filling ingredients keep best if you store them separately. Don’t pile the chickpeas, slaw, and sauce together in a container and think it’s gonna be as good as on day one.

To reheat the chickpeas, you can pop them in a skillet over low heat for a few minutes or microwave them for 20 seconds.

These fast and delicious crispy chickpea tacos are one of my favorite vegetarian tacos. They are plenty filling and have great toppings: a quick slaw and a creamy avocado sauce. YUM!

Here are a few other delicious related recipes!