This is a post mainly about food competitions! First, let me point out that there is an awesome Foodie Fights competition going on now. The secret ingredients are melon and red pepper flakes and it is going to be a close battle, so be sure to check out the entries and vote!

Second, I wanted to post about a cool event I went to over the weekend courtesy of Food Buzz called Cochon 555. The event is held mainly to celebrate the heritage pig. These are pigs that are all cross bred and not factory farmed or anything like that. They are most likely very different thing than what you might find in your local grocery store these days. You can read more about them here.

The event brought together five chefs from DC area restaurants along with 5 wine makers. The chefs were each given a full heritage pig to do with as they saw fit. Then it was sort of a five by five Iron Chef off. Special Ingredient: PORK. A ticket got you into the event to sample the dishes and the wine!

These were the restaurants that competed in the event:

However, the first thing I ate was from none of these places. It was a shot of perfectly browned bacon with bean shooter from Market Salamander.

When I walked into the room, the first thing I noticed was not the large tables of porky goodness that the restaurants were serving or the 5 tables of booze encouraging me to drink up. It was the very calm man in the center of the room who was butchering an entire heritage pig.

I only got to talk to Trey the butcher for a second because he obviously had his hands full, but it was awesome to watch him work. Butchering something like a full pig down to recognizable parts is a very hard task. It takes years of practice. Unfortunately, you get the impression that this is almost a lost art.

The Food. Unfortunately, I wasn’t able to photograph every table, mostly because I was trying to stuff my face. I did try to snap a few shots though.

There were twenty judges that got multiple dishes from each of the 5 restaurants. An enviable job for sure. The attendees got to vote on their favorites and the votes were tallied.

This was one of the judge dishes from The Blue Duck Tavern. I didn’t get to try their what I think is a head cheese, but I did try the roll on the plate which was an awesome pork stuffed steam bun.

Meanwhile, over at the Commonwealth table they were putting out little open face BBQ sandwiches that were some of the best I’ve ever had. With homemade pickles to boot!

The Celebrities. I wasn’t the only food blogger who found his or her way to this very cool event. Here are some other DC bloggers I happened to catch.

Here’s Pete and his girlfriend, Emily, from Pete Bakes! 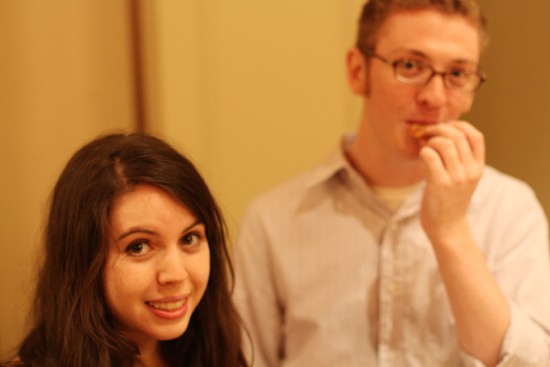 I also ran into Zach and Clay from The Bitten Word. They were in great spirits even while waiting in line for like 20 minutes while Vidalia worked on their Judge plates. 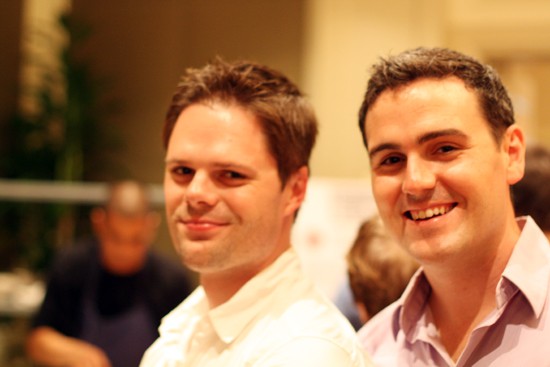 And finally, the team (Jeff Geoff, Nick, and Sara) from Imafoodblog. Even though it was impossible to get them all together, I happened to snap individual photos of the gang.

The Verdict. At the end of the day, the team from Vidalia took home the prize. Congrats to them for making some awesome dishes.

This was a really cool event, and if one happens to come your way (I’m looking at you San Francisco), then I’ll just say that the other food bloggers and myself decided pretty unanimously that this event was definitely worth the cost of admission.

Be sure to check back tomorrow to see what I did with some truffles that were gifted to me from Nick after this meal. It’s a recession so why not cook with truffles right?