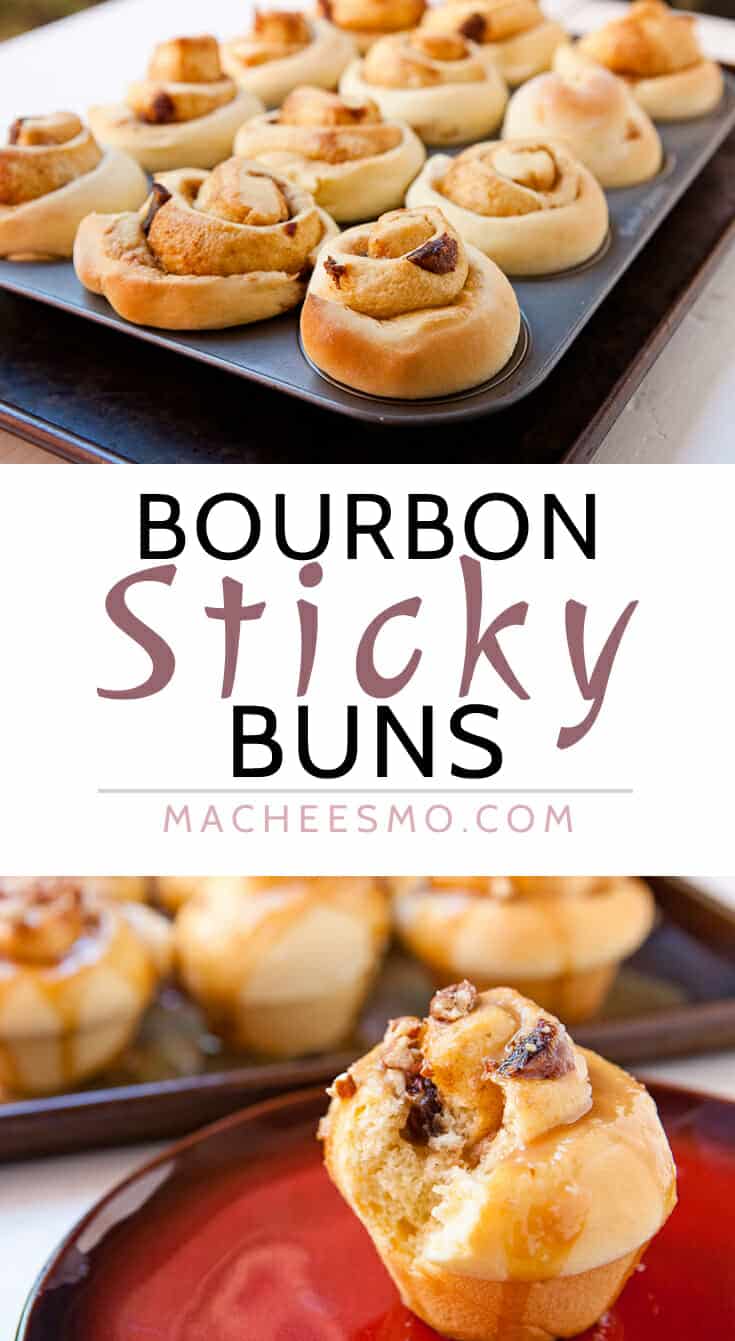 I recently got the bug to do some baking and my brain turned to Cinnamon Sticky Buns! To counter-act the sweetness of your standard sticky bun, I made a quick bourbon glaze sauce for these which is definitely worth your time!

Some cinnamon rolls are best left to proof overnight or at least for a few hours but the dough for these Cinnamon Sticky Buns is surprisingly easy to work with and only needs an hour total to rise. It’s soft and slightly sweet and the perfect vessel for a date and brown sugar filling.

The bourbon glaze just soaks all up in there and will leave you drunk on the sweetness.

Delicious homemade (but quick) dough shaped and rolled into muffin tin sticky buns and drizzled with a luscious bourbon glaze.

As far as homemade doughs go, this is easier than most. The nice thing about an enriched dough like this (with eggs and butter and milk) is that it’s really soft and easy to work with. You don’t need to knead it for hours or anything.

Add the warm milk, sugar, and yeast together in a large bowl (maybe the one for your mixer) and let the yeast bubble a bit. After a few minutes, add in the eggs, salt, and softened butter.

Mix this all together and then slowly add your flour a cup at a time.

I used a stand mixer to beat mine together with a dough hook (five minutes or so on medium will do the trick), but the dough is so easy to pull together that you could do it with just a large spoon and your hands.

Either way, the finished dough should be slightly springy, soft, and a bit sticky.

Let this rise, covered, for just 30 minutes. You could do longer but there’s no real need.

Once the dough has rested for 30 minutes, roll it out on a lightly floured surface. It’ll be a bit sticky still so you can use a heavy hand with the flour.

Roll the dough for the Cinnamon Sticky Buns out into a large rectangle… about 10×24. There’s not need to measure or anything. Just get close and remember that you are going to cut it into 12 even pieces so a good goal is to make sure each piece is two inches wide.

Then brush the dough with some melted butter and sprinkle it with brown sugar, cinnamon, and chopped dates. The dates are kind of like raisins but somehow better. The kind of melt into the filling and make it more interesting.

Roll up the dough into a tight cylinder and then chop them up with a sharp knife!

Place these delicious Cinnamon Sticky Buns in a lightly buttered or greased muffin tin and let them rise for another 30 minutes.

The finished Cinnamon Sticky Buns should puff up substantially in the tins and be golden brown around the edges.

While these cool off a bit, toast the pecans on a baking sheet in the oven for 10 minutes and then chop them up.

For the glaze, just add all the ingredients to a medium pot over medium heat (except the salt, vanilla, and baking powder). Stir that together and let it simmer for about 2 minutes. The mixture should thicken and be an even consistency.

Then remove it from the heat and add the salt, vanilla, and baking powder. It will bubble like crazy when you add the baking powder. Just keep stirring until it calms down.

Then remove the Cinnamon Sticky Buns and place them tightly together on a clean tray. Slowly pour over all that delicious glaze. You’ll lose some glaze over the edges, but your goal is to get as much as possible soaked into the buns.

This glaze isn’t like a powdered sugar glaze. It won’t really harden. It will always be, well, sticky at room temperature.

I had to take a bite as soon as possible!

I took these into Betsy’s office because they had to get as far away from me as possible.

By the time I got home, Betsy had already texted me that they were gone.

I guess everybody else is in the same mood as me. Or it’s just impossible to say no to a good cinnamon sticky bun!

Here are a few other great breakfast bread recipes!