I like to keep a bag of tortilla chips on hand for a quick snack or maybe some late night nachos or something. When I can I like to make my own tortilla chips, but I don’t always have the time. Since chips and salsa is probably my biggest snacking weakness, I almost always have a bag in the pantry.

What I hate is when I get two thirds of the way through a bag and reach down expecting a perfectly dip-able chip, only to find this disaster.

What am I supposed to do with you, Mound of Crumbles? I cannot dip you. I cannot put cheese on top of you. You are useless!

Or are you? What if I can turn you into Chip Crusted Salmon?!

You are four ingredients away from one of my absolute favorite ways to bake salmon. Coat it in leftover chips!

2) Added about 1 Tablespoon of fresh rosemary and the juice from one lime to about 1 Cup of crumbs.

3) Add 1 Teaspoon of kosher salt to the bag.

4) Lightly oil a baking dish and laid salmon in it.

5) Sprinkled some salt right on the salmon and then start packing on the tortilla crumbs!

I decided that instead of trying to make these things something that they are not, I would just embrace them for what they are: crumbs.

So I put them in a bag and crunched them up even more to make a sort of potato chip crumb topping (or tortilla chip). This is also a good way to take aggression out for all of the crumbs of the past!

Really let them have it.

I decided to use these crumbs to coat a nice piece of salmon, but I think you could probably use it on chicken also and it would be great. Because I chose fish, I got some herbs and a lime and added those to the party.

I added about 1 Tablespoon of fresh rosemary and the juice from one lime to about 1 Cup of crumbs. I think for fish, fresh dill would have been a better choice, but I had some rosemary around so that’s what I used. If you use tortilla chips, you might want to add a pinch of salt, but potato chips are salty enough on their own.

Then I lightly oiled a baking dish and laid my salmon in it. I sprinkled some salt right on the salmon and then started packing on the tortilla crumbs! One cup of crumbs was more than enough for 3-4 salmon filets.

I let mine bake at 350 for about 15 minutes and it was still a bit medium rare in the very center which is perfect for salmon. You’ll need to adjust depending on the thickness of your cut though. Mine was from the end of the salmon fillet so it wasn’t very thick.

The crumbs do a great job of keeping in the moisture of the fish and also getting crunchy and delicious.

I served my fish with a cucumber salad: chopped cucumbers, a sprinkle of lime juice, salt, and fresh mint. The salad worked great with the fish.

I’ve made this recipe before with crumbled tortillas chips but I think it’s best with potato chips. I think you could use any original flavored tortilla or potato chip though and get a good result. I’m not sure I would venture into the Cool Ranch world or anything… 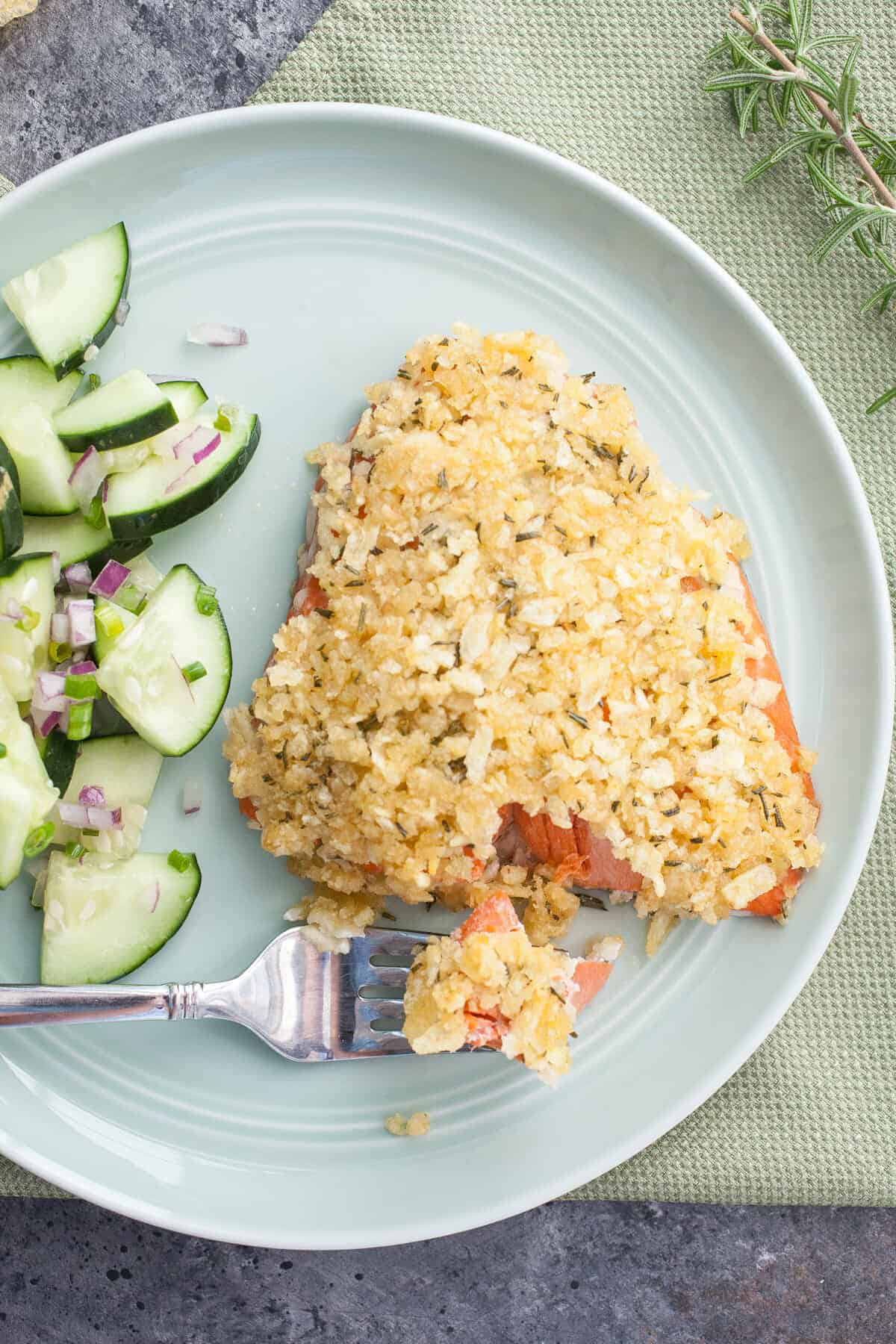 What’s strange is that now I kind of look forward to the crumbs, because it means I get to make something delicious rather than just eat chips and salsa all day…