This soup was made with the best of intentions. Bets was begging me to make a cold soup for dinner last week and I knew she meant some sort of gazpacho type soup, but I figured I would go out of the box and try something new.

The good news is that it was a delicious soup. Flecked with fresh herbs, blended with sweet raisins and crisp cucumber, it’s a chill bowl, for sure.

The bad news is that I forgot that my wife has a massive aversion to dill. It’s one of her few dislikes when it comes to food and even the little bit in this soup made it tough for her to swallow.

But, assuming you don’t mind dill, dig in. And even if you do mind it, just leave it out. It isn’t essential!

Take the heat off with this easy to make blender cold yogurt soup! Topped with golden raisins, fresh herbs, and smoked paprika.

Slightly adapted from this Food and Wine recipe.

1) In a blender, add the yogurt, nuts, cucumber, and raisins. Blend until the soup is mostly smooth. Some texture is okay. Be sure to peel and seed the cucumber.

2) Add in herbs and pulse a few times to combine. Taste the soup and season with salt and pepper to your liking.

Chill soup for at least 30 minutes. If you find it’s too thick, water it down with chilled ice water. Serve soup in deep bowls garnished with extra raisins, herbs, and a sprinkle of smoked paprika. Serve with lots of crusty bread for dipping.

This soup started with a lot of yogurt. I like to use whole milk yogurt so it’s really rich, but don’t use Greek yogurt which is strained and doesn’t have as much liquid. You need the liquid because it’s, well, soup.

Add the yogurt, cucumber (peeled and seeded), raisins, and cashews to a blender. You can use a fancy blender or a normal blender to get the job done here. I have a normal blender that I’ve had for years and it still makes a fine soup.

After those items are blended together the soup might have some texture to it (chunks) and that’s okay. It’s a personal preference really. You can puree it until it’s completely smooth or leave it a little chunky.

Next, add in all the herbs. Leave out the dill if it isn’t your thing.

Pulse the herbs into the soup. You want them to be flecked in the soup. It shouldn’t be completely smooth.

At this point the soup is basically done, but it’ll need some tweaking. For starters, season it with salt and pepper.

Second, test the texture and consistency. If you want it thinner, water it down with some ice water. Personally, I liked it thicker and didn’t use any water, but I can see it both ways.

Whatever you do, serve it with nice toasted and crusty bread. Perfect for dipping!

I recommend garnishing each bowl of the summer heat killer with a heavy amount of raisins and some extra herbs and a dusting of smoked paprika.

Anybody a fan of yogurt soups like this? To be honest, I’ve never had them before, but really liked this one! 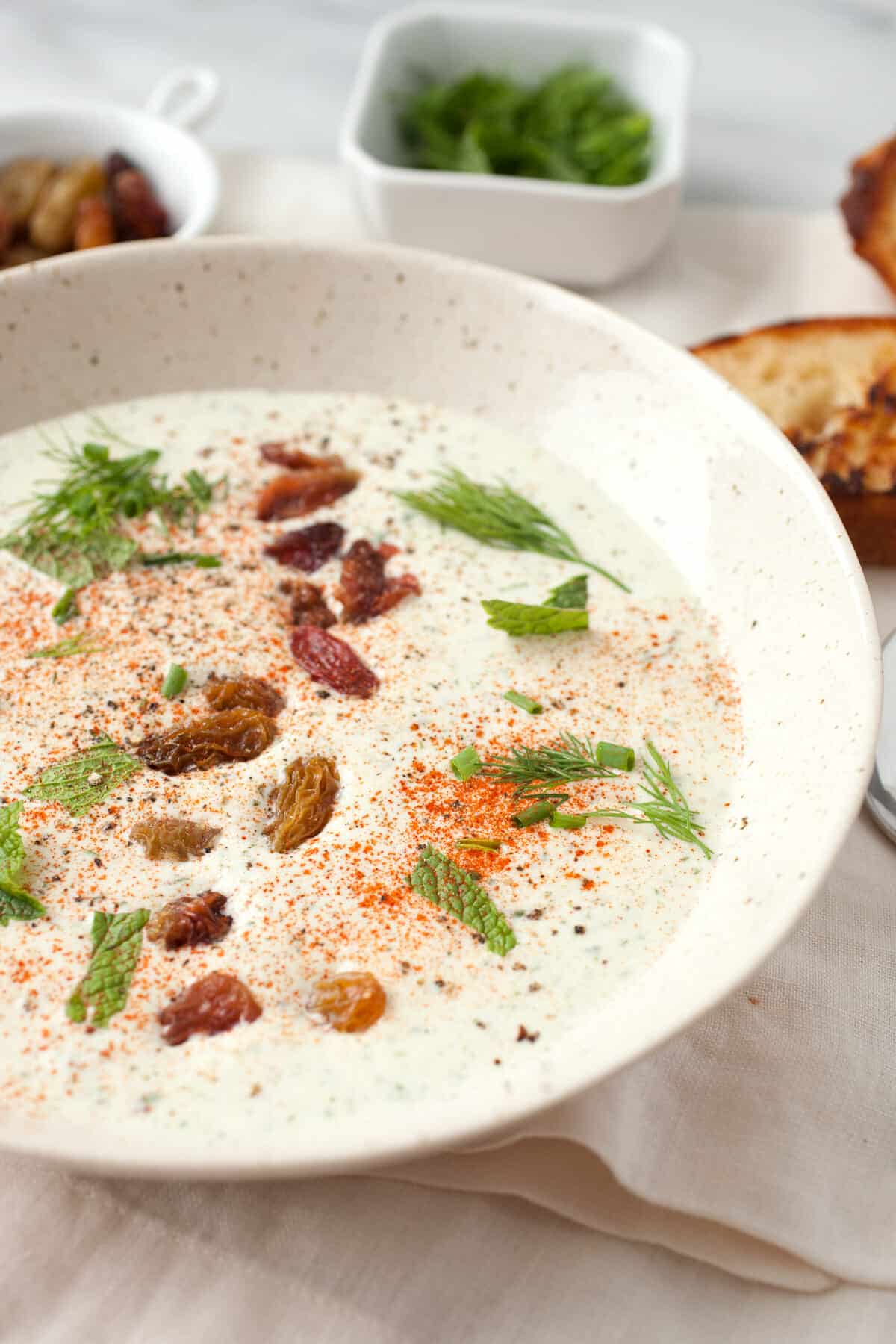