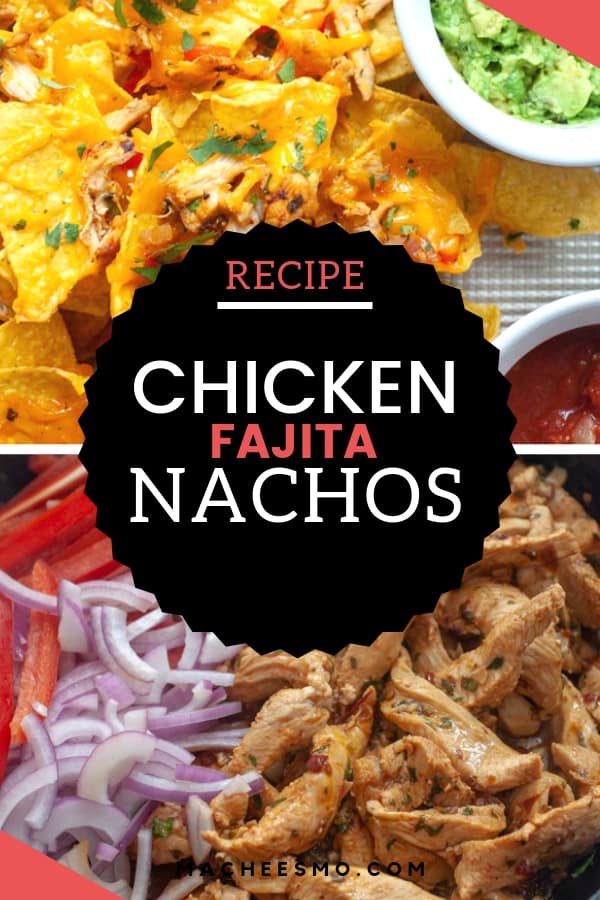 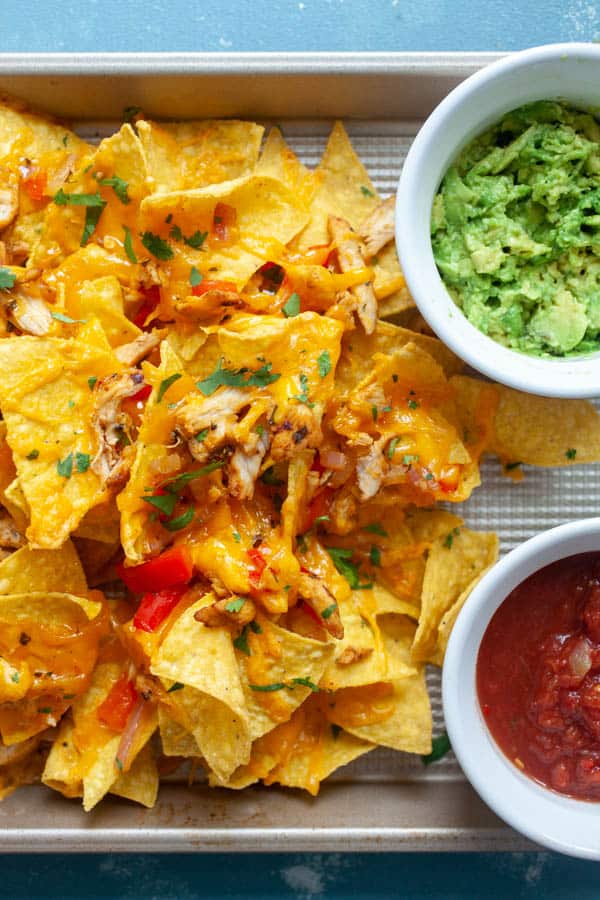 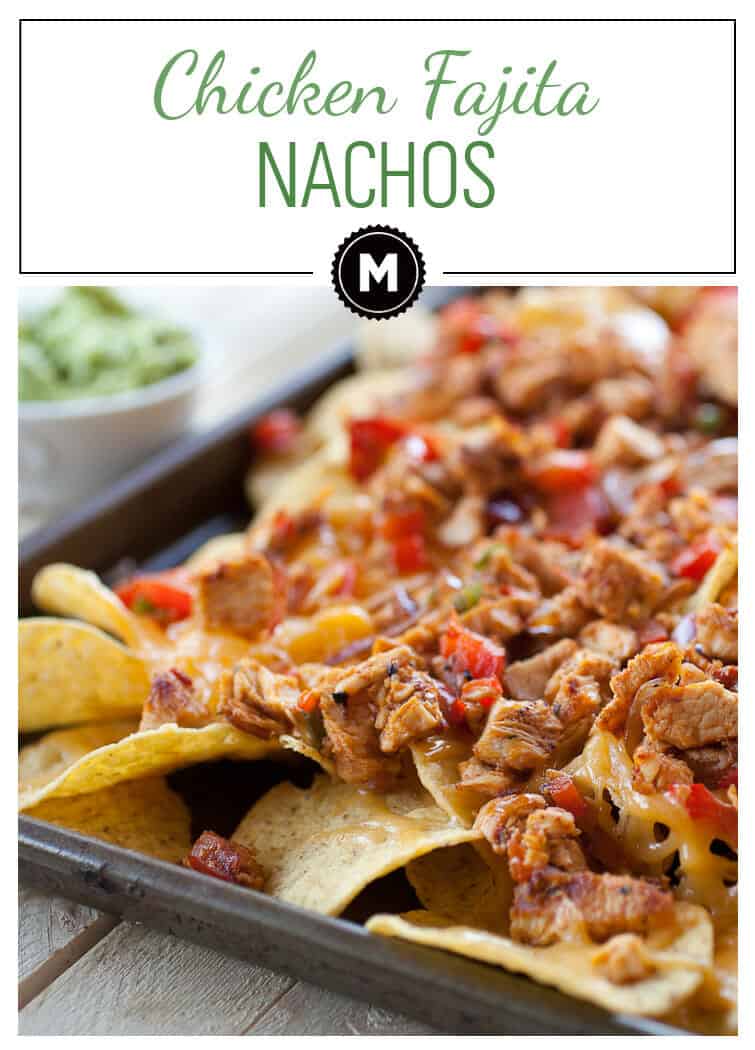 There are so many reasons to make these Chicken Fajita Nachos! Maybe you are excited about the many playoff sports happening right now (NHL and NBA) or you just want to get ready for Cinco de Mayo in a few weeks!

These fajita nachos have fantastic flavor and feed a crowd! You can actually make a batch of the chicken fajitas and eat those as a meal, if you want, and use the leftovers as nachos the next day. That’s how we frequently roll at house Macheesmo!

The add-ins for the nachos are standard fajita toppings. I used a marinated chicken with chipotle and lime and then added some red pepper and red onion as well. Chop it all up and it’s nacho time!

1) In a food processor, combine the marinade ingredients and pulse until well-mixed. Alternatively, you can dice everything very finely and mix together.

2) Add marinade to a bag with sliced chicken. Let marinate for at least 20 minutes. Slice veggies and grate cheese while chicken marinates. Preheat oven to 350 degrees.

3) In a heavy skillet (Cast iron works well), heat over high heat. Add a drizzle of oil and cook chicken until it is cooked through, stirring regularly.

4) When chicken is cooked through, about eight minutes, remove chicken from pan and add veggies. If pan is really dry, add another drizzle of oil. Keep the pan hot. Cook the veggies until they are seared but still slightly crunchy, about two minutes.

6) Lay out a layer of tortilla chips on a baking sheet. Top with grated cheddar cheese and a nice layer of the chicken/veggie mixture.

7) Bake nachos for 5-6 minutes until the nachos are warm and cheese is melted.

Serve immediately with guacamole and any other toppings you want!

This marinade is perfect for any sort of Tex-Mex situation. It combines all of my favorite flavors: cilantro, garlic, chipotle, and lime juice.

It helps to have a little mini-processor to buzz it up in, but you could also just chop everything very finely and mix it together.

After a quick buzz in the food processor you’ll have this really wonderful fajita marinade. It would go great on any sort of meat and even tofu or tempeh I think.

Just put your main protein in a bag and pour in the marinade. For something like chicken, just 20 minutes of marinating will give it plenty of flavor.

When I think of fajitas I think of lots of peppers and onions in addition to the meat. So I chopped up some red onion and red pepper. Leave these in big slices right now since they will cook on high heat.

There are two cooking steps for these nachos: Cook the chicken fajitas then cook the nachos. Neither step takes very long.

It does help to have a really hot skillet or grill pan for the fajita step though. You could grill the stuff, but I just used my cast iron skillet on this particular day.

Get it nice and hot over high heat and then add your chicken. Cook the chicken until it’s cooked through and seared. Stir it frequently as it cooks so the peppers don’t burn too badly. It should only take about 8 minutes to cook through.

Then scoop out the chicken and add the peppers or just move the chicken to one side if you have a big enough skillet. Veggies will cook even faster. If the pan looks really dry, add a drizzle of olive oil to it.

Once the peppers have cooked for a few minutes they should be lightly charred but still a bit crispy in spots.

Remove them and chop up the veggies and chicken. You may want to season the mixture with a pinch of salt and pepper also.

The nachos step is even easier. Just preheat your oven to 350 F˚. Lay out a good layer of thick tortilla chips on a baking sheet. Don’t use the really thin chips as they will just turn into a soggy mess.

Top the chips with grated cheese and then a nice layer of the chicken fajita topping. I had a little bit of topping left over but I used most of it.

Bake this whole tray of chicken fajita nachos for about 5-6 minutes until everything is warm and the cheese is melted.

Serve it with any toppings that you like. I recommend guacamole, salsa, and maybe some sour cream.

It’s perfect game day food or any time you want to get your tex-mex game on! 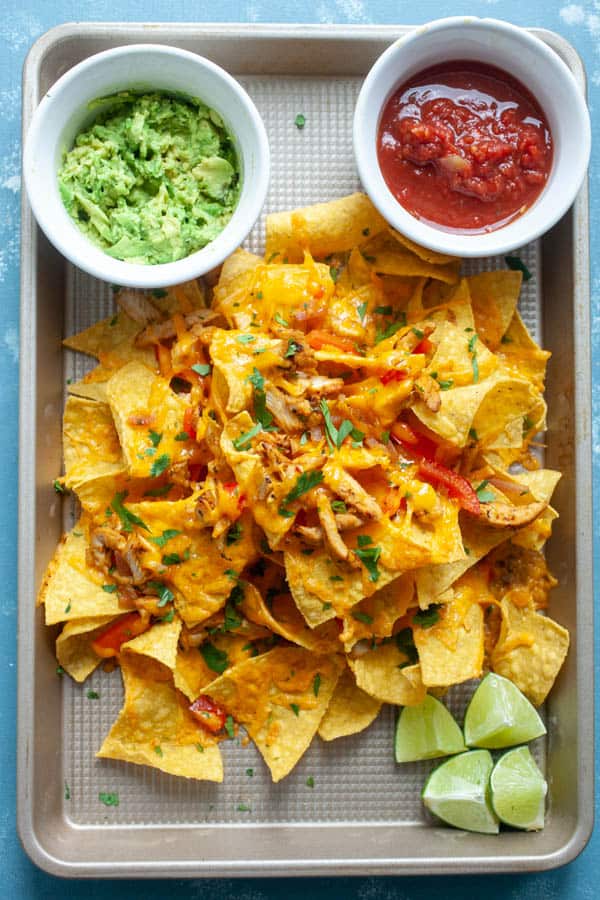 Here are a few other great Tex-Mex recipes!