I was so excited to try my hand at some more fast food things after my breakfast sandwiches were so well received. After last week’s poll, it looks like people were most excited about the possibility of making Chalupas at home.

Let me start by saying that I’ve never actually had a Taco Bell Chalupa, although I did go through a Taco Bell phase in high school… That means I based my chalupa version off of what I could see in their photos which was some sort of chewy shell, seasoned ground beef, and various toppings.

Guess what: I nailed it!

It’s true that my shells are not as perfectly shaped as Taco Bell’s version, but cut me a break people. I consider that character! As you might guess, the only hard part about chalupas at home is the shell. Otherwise, you’re basically just making a taco. 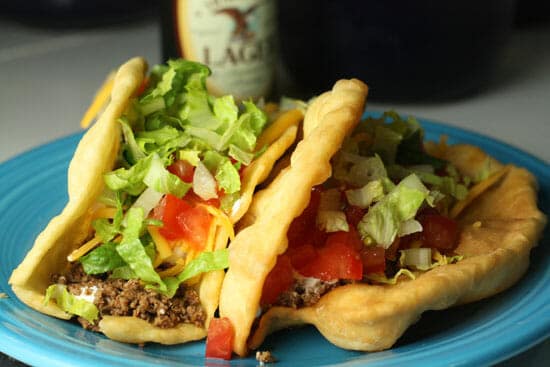 How to make your own chalupas with shells that are crispy on the outside and doughy on the inside. These shells hold up to a lot of filling.
3.53 from 186 votes
Print Recipe Pin Recipe
Prep Time 45 mins
Total Time 1 hr
Course Main Dishes
Cuisine Mexican, Tex-Mex
Servings 3 Servings
Yield 6 Shells

Chalupa Shell: (I found this recipe that I adapted. I was happy with it. It Makes 6 shells so I recommend doubling it so you have some room for error.)

I decided to get all my toppings ready before making my shells just because I assumed they would be best if we ate them as soon as possible. This turned out to be not completely true. The shells kept pretty well actually and were even good on day two.

You can definitely buy one of those packets of taco seasoning if you want, but the above recipe I used is really flavorful.

Start out by adding your oil to a large pan over medium-high heat. Once your oil is hot, add your onions and let them cook for minute or two until translucent. Then add all your spices and stir. Cooking your spices for just a minute or two before you add the beef will really release their flavor. Just be careful to make sure they don’t burn.

Then add your ground beef! I used an 85/15 ground beef for this version.

Turn your heat down to medium and cook, stirring frequently, until the beef is browned and it smells like tacos!

While my beef cooked, I prepped all my other toppings. I didn’t want to be distracted while I was making the shells!

The shells for these guys is obviously the tricky part of this recipe. Luckily the dough is incredibly easy to make. It’s just the frying and shaping part that requires a bit of dexterity.

To make the dough, just add all your dry ingredients to a bowl and stir them up. Then cut in your butter (the original recipe used shortening). I used my fingers to evenly incorporate the butter. Then add your milk and stir it together until the dough forms a ball.

Next, lightly roll out the ball with your hands and divide it into 6 even pieces. Roll each of those into balls and you’re ready to get started frying!

I doubled the recipe and here are my dough balls ready to be rolled out and fried.

TIP. For the frying part, don’t use a really deep pot or pan. A deep cast iron skillet is perfect for frying these. The reason is that you only want your oil to be about 2 inches deep at the maximum that way you can easily tong your dough and shape it.

So get out your favorite skillet or pan and add enough frying oil (I used canola) to come a few inches up the side. You want your oil to be 350 degrees. As always when frying, I highly recommend a deep fry thermometer. They aren’t very expensive and if you’re oil is too hot or too cold, you’re shells just won’t fry up correctly.

While your oil is heating up, lightly flour a clean surface and roll out a ball of dough to roughly a 6 inch diameter circle. Try to make it as round as possible, but it doesn’t have to be perfect.

Next, when your oil is hot, gently slide the dough into the hot oil. It should float immediately and start to puff up!

Each shell will only take about 2 minutes to cook. You have two choices. You could just fry it for about a minute on each side, turning it with tongs a few times to make sure it cooks evenly. That’s the easy way to do it and would give you kind of a chalupa tostada base that you could pile toppings on.

If you want a real shell though, this is what you have to do:

Sorry I couldn’t really take photos of this process. It all went down too fast. Don’t worry if you mess up one or two, eventually you’ll get the hang of it.

Here’s one of my finished shells!

You can keep these in a warm oven (200 degrees) while you fry off the rest of the shells and then everybody can eat at the same time.

I ripped apart one of the chalupas so you could see the interior texture. They were nice and crunchy on the outside and soft and chewy on the inside.

These are larger than normal taco shells so you can really pile them high and deep with fillings!

So while I’ve never had the Taco Bell variety, I can’t imagine that their version is better than mine because these were really awesome. Whether you actually make the shells or just make flat tostadas to pile stuff on, chalupas are a definite win.

If you like Tex-Mex these are a great change from the normal taco/burrito line up so give Chalupas a shot!