Now Reading How We Became a Cargo Bike Family

How We Became a Cargo Bike Family

A few months ago, Betsy and I noticed a new style of bike popping up in Denver called Cargo Bikes. These sorts of bikes have existed for a long time but they are just now becoming popular in American cities, largely due to an effort to make roads more bike accessible.

After a lot of research and planning, we took the plunge and became a cargo bike family!

We have been using the bike for a few weeks now and I thought I’d review our experience so far and talk about the pros and cons!

What is a Cargo Bike?

A cargo bike, in short, is a big ass bike. The idea is that it can actually replace a car for people that live close to things they access frequently (stores, groceries, school, work, etc.) The manufacturer we bought our bike from (Yuba Bikes) is one of the top producers in America and they make a wide range of bike options that can be configured in almost any way you can imagine to fit your needs.

Betsy and I chose their Sweet Curry model (I don’t have any affiliate relationship with them) after trying a few different ones. It’s a smooth and safe ride and I have no concerns about hauling the kids around on it. We configured the bike in a way so Darby is strapped in to her own seat and Theo just holds on and has foot boards to help support him. They are both encased in a roll cage of sorts to prevent any accidental fall-outs and protect in case of a mild collision or topple.

A Note on Our Lifestyle

A cargo bike is decidedly not for everyone. They are expensive so if you are going to get one, you have to make sure you can use it enough to make it worth it. We actually sold our second car (A 2002 low mileage Civic) to afford the bike with all the equipment we needed.

One reason for our transition to the bike is because I was getting frustrated with our transportation options. We live in downtown Denver, but we still drove a lot of places just because it’s hard to cart the kids around or it would take too long to walk places. So the bike solves that problem for me. It’s actually quicker than driving many places!

We still have one car that we don’t actually need daily (Betsy can bike or take the bus to work as well), so we were in a pretty good position to take the plunge here. Also, I figure we can always find an old Civic if we decide to go back to it!

The Pros and Cons of the Cargo Bike

As you might imagine, there are many pros and cons of carting around two small kids on a bike. Let’s talk it through!

So far, the pros have very much outweighed the cons for us and we’ve enjoyed simplifying our lives a bit.

Of course, selling a car and buying a bike isn’t feasible for everybody, but so far we love it and if you live in a bike-friendly area, it might be worth researching! 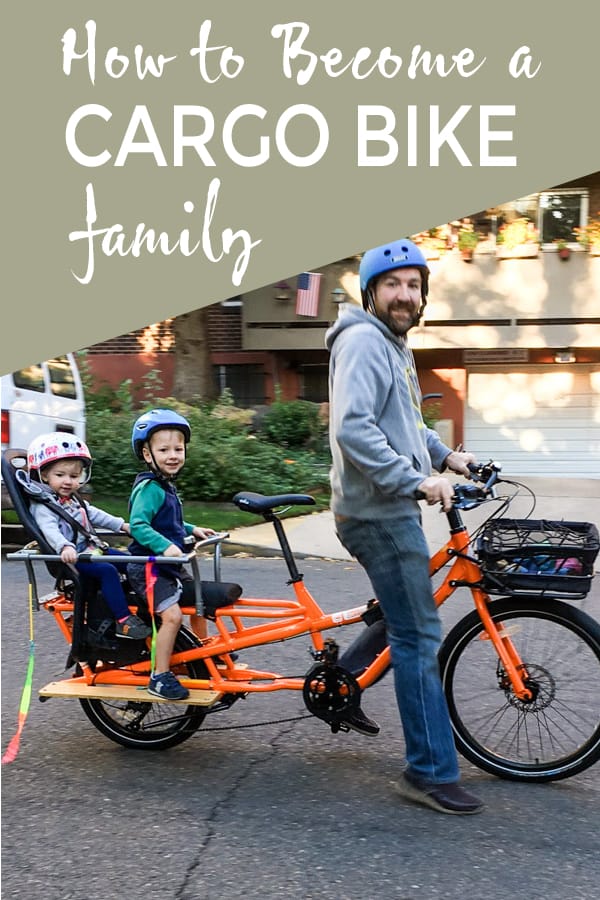