This little gem of a slightly sweet and citrusy bagel spread gets filed away in my ever-growing list of recipes to make not-great, store-bought bagels worth it. Other installments in this series include Jalapeno Cheddar cream cheese and caramelized onion cream cheese!

For those of us that don’t live in NYC, it can be really tough to find a great bagel. There’s one decent bagel spot here in Denver, but the lines can get a bit out of control and it’s not exactly around the corner from my house.

So, I’ve resigned to focus on the spreads. In this case, it involves big chunks of fresh pineapple that have been roasted into submission until they caramelize and turn intensely sweet.

As far as I know, you can’t buy caramelized pineapple cream cheese in any store, but it’s well worth a few minutes on a lazy weekend.

This bagel spread is something original (can’t find it in the stores) and very delicious (worth the work)!

1) Preheat oven to 400 degrees F. Peel pineapple and chop core into eighths. Cut out center core for each eighth and chop into small 1/2-inch chunks.

2) Measure out two cups of pineapple and toss with brown sugar, cinnamon, and a pinch of salt. Spread out pineapple in a baking dish.

3) Bake pineapple at 400 degrees until it’s lightly caramelized, stir it occasionally. It will need to bake for approximately 20 minutes, but you can bake it longer for a deeper caramelization.

Store leftover cream cheese in the fridge for up to a week.

Dealing with the Pineapple

This big fruit is kind of intimidating unless you chop them up daily like this dude on Youtube.

Luckily, you don’t have to be quite that elegant.

I just chop the ends off and then use a sharp knife to slice off the thick outer skin. Then I cut into quarters and slice out the core.

Then you can take each quarter and dice it up pretty easily. For this recipe you want to shoot for 1/2-inch cubes for the roasting process. It doesn’t have to be exact though!

Other Pineapple Sources: You absolutely can use fresh pineapple from your deli that’s already been chopped. You can’t use canned pineapple. It’s just soaked in too much juice and sugar and won’t ever caramelize correctly.

Once you have your pineapple chopped, stir it together with brown sugar, cinnamon, and a pinch of salt.

Transfer this to a baking dish and roast it at 400 degrees F. for about 20 minutes.

You’ll want to stir the pineapple every 10 minutes or so but don’t stir it too often as the whole point is to caramelize it in spots.

This was my pineapple after 20 minutes of roasting, but you could go longer if you want a more intense pineapple flavor. There’s a lot of moisture in pineapple and it’s pretty hard to over-roast it.

Second, chop it up a bit. Don’t leave the pineapple in big chunks. It’s just too chunky for a spread like this.

You can go pretty heavy on the pineapple though. I like pretty much equal parts pineapple and cream cheese.

Toast a bagel (or don’t if you can find a good one) and spread on liberally.

If you’re a bagel lover, you gotta try out this schmear. 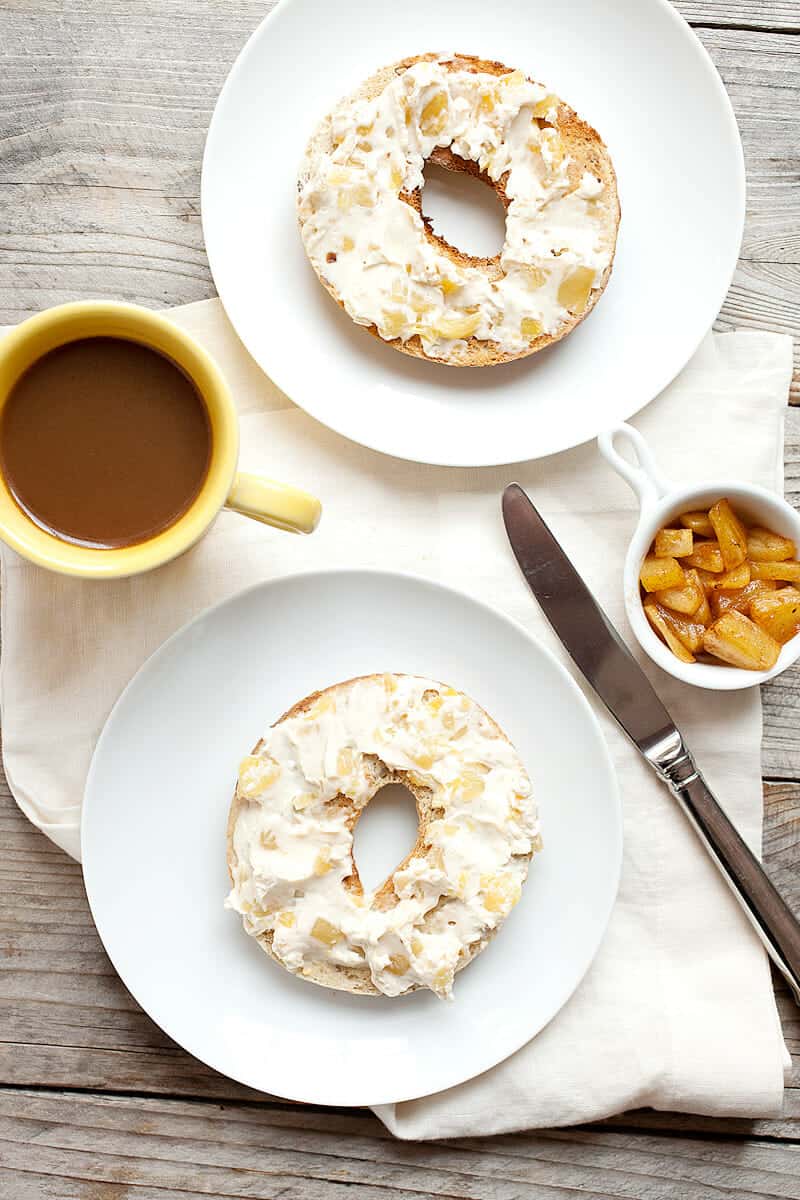