This post is sponsored by Land O’Lakes, Inc. Check out their full line of products including the Land O Lakes® Butter I used for this recipe. Be sure to follow them on Facebook and Twitter for more great recipes.

It’s a well-known fact in my house that while I don’t have a huge sweet tooth, I can completely destroy some ice cream. A cupcake will sit on my counter for days, but I think a container of ice cream in the fridge is a dare. As in, I want you to dare me to eat it all.

Of course, as the weather cools off some might think that ice cream is no longer a first-order dessert. Not for this dude!

Instead of sub it though, I just serve it with warming stuff like these perfect caramelized pears with rum butter sauce. And Land O Lakes® Unsalted Butter adds an undertone of richness in both the sauce and the caramelized pears.

I think you’ll find this recipe to be surprisingly simple and so completely perfect as the weather cools off.

The rum butter sauce recipe makes a good amount of sauce, more than you’ll need unless you are hosting a party and want to serve this dessert. The sauce keeps great though and can be spooned over all sorts of desserts.

A perfect fall/winter dessert and a great excuse to bust out the ice cream even if it’s chilly outside! The sauce on this is crazy delicious!

For Rum Butter Sauce, combine ingredients in a small pot and heat over low heat until it’s bubbling. Stir continuously while sauce simmers for 5-6 minutes until sauce thickens slightly. Remove from heat and let cool.

For pears, add 1 tablespoon butter to a nonstick skillet over medium heat. Once butter is melted, add pears, quartered. Cook for 2-3 minutes per side until pears are caramelized. Cook pears in batches if your skillet isn’t large enough.

Serve warm pears with a scoop of ice cream, drizzled with the rum butter sauce and garnished with fresh mint.

Rum butter sauce will store great in the fridge for a week.

There are only two parts to this marvelous dessert. The sauce is the first thing you’ll want to work on. A sauce couldn’t get easier though. You can literally just toss everything in a pot!

The key to this sauce is to heat it slowly over low heat. You ultimately want to bring it to a simmer and let it simmer for a few minutes so it thickens, but you want to do it slowly and stir it pretty consistently. The sauce should come together and be really smooth.

Caramelizing pears is my new favorite thing. These are quick to make. Just quarter the pears and add them to a skillet over medium heat with some butter. Cook the pears for a few minutes per side until they have some nice color on them.

You can serve the sauce warm, but I think it’s better at closer to room temperature.

Serve a few pear quarters with a big scoop of ice cream, a few spoons of sauce, and maybe some mint!

Doesn’t get much better than this! 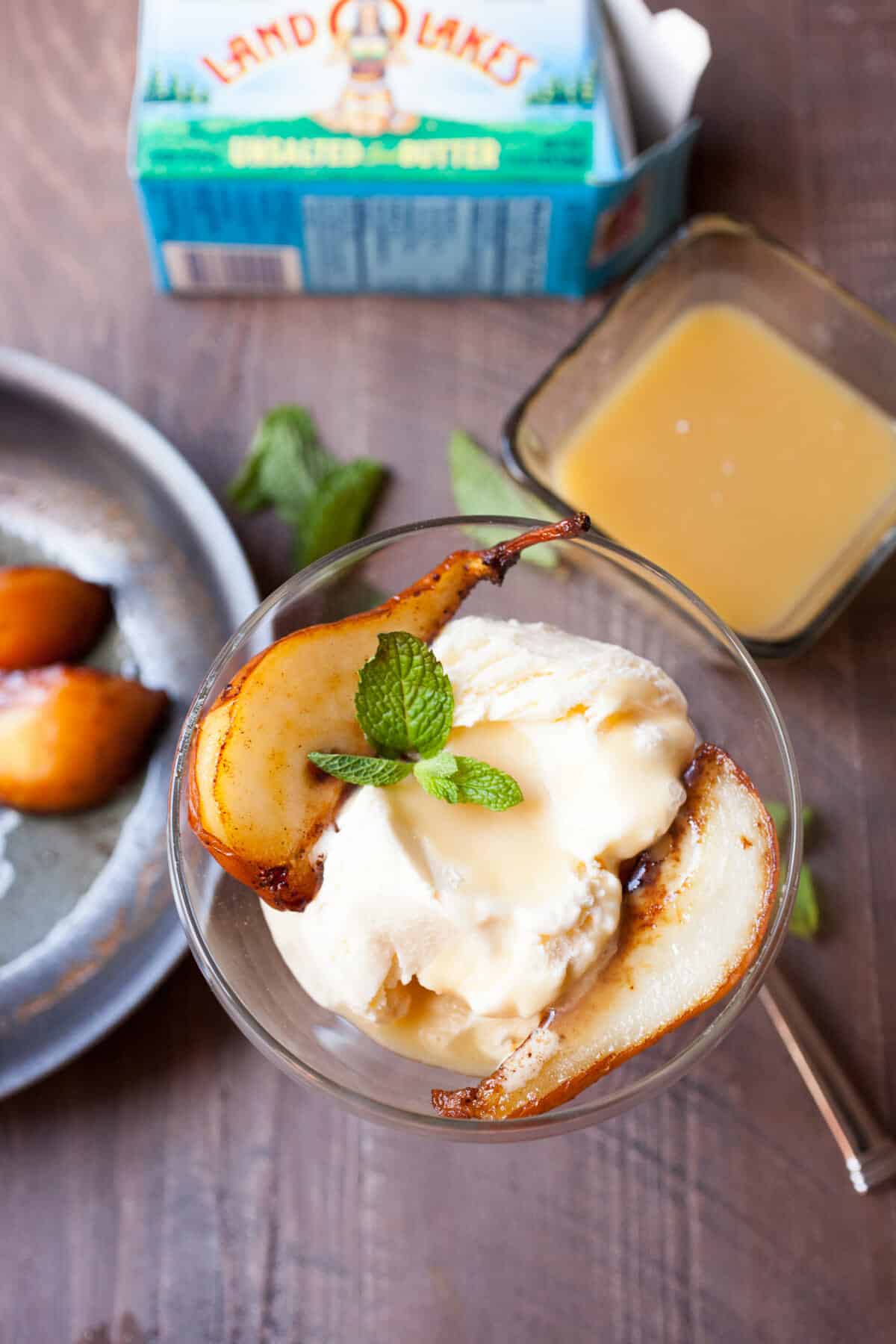