A few weeks ago a few of Betsy’s family members flew in and threw her a baby shower. The theme of the shower was Tex-Mex and officially called a “Fetus Fiesta.” I made these special Churro Cupcakes with Caramel Filling for the party and they were a huge hit!

I was in charge of food and cupcakes were on the menu. Ever since I mastered my gender reveal cupcakes last year, filling cupcakes has been my new favorite thing. Since we aren’t finding out the gender of our baby though, I had to go with a neutral non-colored filling.

These churro cupcakes go a step further though and top each  one with a thick sombrero of cream cheese and cinnamon frosting.

I won’t lie… this churro cupcake recipe is a bit of a production, but totally worth it for a special occasion.

Caramel-filled homemade churro cupcakes topped with a cream cheese cinnamon frosting! If you like churros, you’ll love these!

2) In a medium bowl, stir together flour, baking powder, cinnamon, and kosher salt and set aside. In a stand mixer or with a hand mixer, cream together butter and sugar until light and fluffy. Then beat in eggs one at a time followed by vanilla.

4) Divide batter between the cupcake tins, filling about 3/4 full. Bake until the cupcakes are set and a tester comes out clean, 18-20 minutes. Remove the cupcakes from the tins and let cool completely before filling and frosting.

For Caramel Filling:
1) Add sugar to a small saucepan over medium heat. Stir in a tablespoon of water and stir to combine. Let sit until sugar melts. Then stir occasionally (slowly) until the sugar is completely melted (some lumps may form but they will melt out).

2) Once sugar is completely melted and a nice amber color, add in butter, cut into pieces. It will froth and hiss but just stir it in. Then whisk in the vanilla and cream off the heat. Let the caramel cool completely before using. Refrigerating it for 30-45 minutes should thicken it enough.

For Frosting:
Beat together butter and cream cheese until light and creamy. Add in vanilla, cinnamon, and powdered sugar in 1 cup batches. If frosting is too thick, feel free to add milk in tablespoon amounts to lighten it.

When cupcakes are cool, cut out a center piece and fill each with caramel. Then replace tops on cupcakes and frost each cupcake. Drizzle finished cupcakes with extra caramel and optionally dust with powdered sugar.

To make a quick caramel sauce, you don’t really need to use a thermometer or anything. You really only need to do that if you’re making candy. For a simple sauce though, the color and sugar will tell you when it’s ready.

The big key is to not fuss with it too much. Just combine the sugar in a small-medium pot with a tablespoon or two of water.

Stir that all together and then let it heat over medium-high heat. Then just let it sit. It might develop some lumps, but eventually the sugar will actually melt and start to turn an amber color. You can start to slowly stir it at this point to make sure it’s melting evenly.

Once all the lumps are melted out, stir in the butter. It’ll hiss and complain, but just keep going.

Then remove the sauce from the heat and whisk in the vanilla and cream. Again, be careful here as the sugar is super-hot and the cream is cold so it will foam up and boil. Whisk it in slowly and it should turn into a silky smooth caramel sauce.

You’ll need to let this cool for 30-45 minutes in the fridge before you can use it.

Theoretically you could use any cupcake recipe for these. Just make sure to add in about a tablespoon of cinnamon to the cake batter. That is not a typo. You want them packed with cinnamon.

The basic cupcake I used just creamed together some butter and sugar.

Then add in some eggs, vanilla, dry ingredients (mixed separately), and milk.

The final cupcake batter will almost look like chocolate because of all the cinnamon.

Then just divide it into cupcake tins. You should get about 24 churro cupcakes.

They’ll need to bake at 350 degrees F. for 18-20  minutes. Then you’ll want to let them cool completely before you try to fill or frost them.

Who doesn’t love cream cheese frosting? It’s probably my favorite thing to put on cakes and cupcakes. This version is cream cheese and butter beaten together until light and fluffy. Then add in some cinnamon, vanilla, and loads of powdered sugar.

If it gets too thick, feel free to add in some milk to thin it out a bit.

They make these special cupcake corer things for this job, but I just use a sharp knife to cut out a little section of each cupcake. Then you can drizzle in some caramel and put the top back on the cupcake.

Then frost the cupcakes however you like to. I used a piping bag to try and make them pretty, but you could use a plastic bag with the corner snipped off or just spread it on with a knife!

Then I drizzled some extra caramel on top of each cupcake and dusted my Churro Cupcakes with cinnamon sugar. 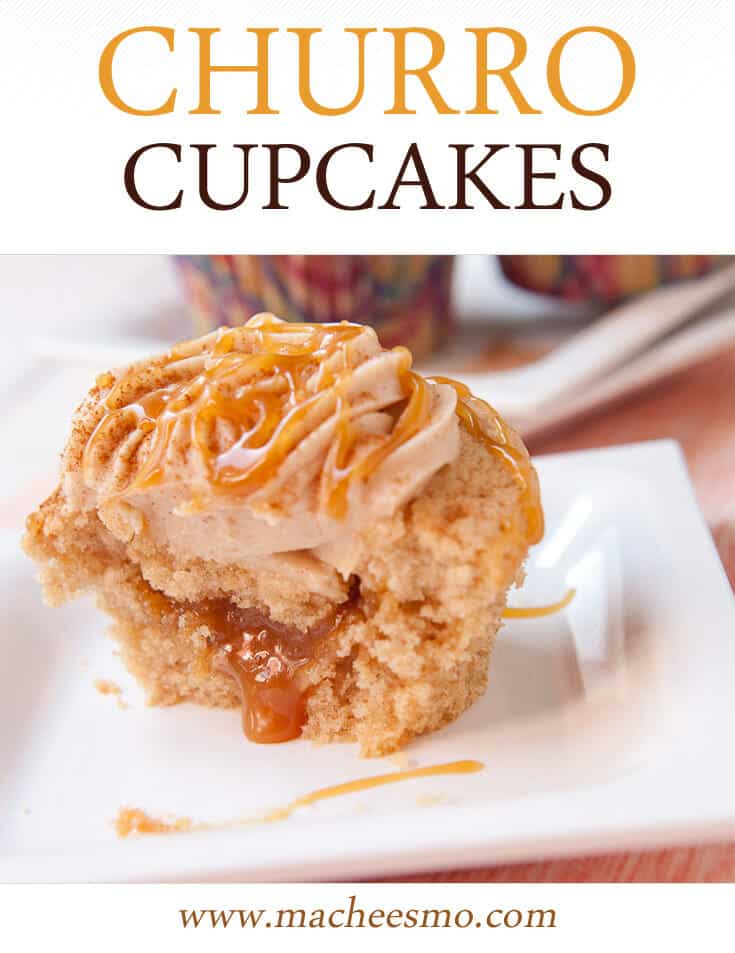 These churro cupcakes might be my favorite cupcakes I’ve ever made even though they are a bit of work. It’s definitely a cupcake I’d pay $4 for, which says a lot because I mostly think high priced cupcakes are rip offs.

These though… they are worth every calorie and minute of work.

Here are a few other great cupcake recipes!