I’ve been hosting some fun food blogger meet ups once a month in the Denver area. It’s a great way to get out from behind the computer screen and meet real live humans! (Email me if you happen to be in the Denver area, write about food, and are interested!)

We’ve held the last few at a place called Punch Bowl Social which recently went through a huge menu restructuring. When I looked at the menu, the thing that caught my eye was a grown up bologna sandwich! I tried it out while I was there and it was really good. Great flavors, but also a pretty hefty price ($13) for a bologna sandwich!

I figured I might be able to trick out a homemade version using similar flavors. Turns out it was pretty easy to do at home and get reasonably close to the original. This is NOT the bologna sandwich of your youth. It’s a grown up version, for sure and much better in my opinion!

A grown up and much tastier version of the bologna sandwich with mortadella, Gruyere cheese, and a quick homemade olive tapenade.

1) Roughly chop olives and stir into pesto for a quick tapenade.

2) Add neutral oil to a nonstick (or cast iron) skillet over medium heat. Add mortadella slices and spread them out so they sear. Cook for a few minutes until they start to sizzle.

3) Stack mortadella slices in a stack and let them sear for 3-4 minutes so they are crispy on one side. Flip mortadella.

4) Add Gruyere cheese to mortadella stack and cook for another few minutes until cheese is melted (you can cover with a bowl to steam the cheese and melt it faster).

A better sandwich starts with better bologna. Specifically, I like to use mortadella which is technically different from bologna but has a lot of similar properties, plus a little more fat and typically also some nuts like pistachios in the meat.

I like to get it sliced really thin from the deli for this sandwich.

You could just toss this between some bread and be in okay shape, but a few extra minutes of work will get you something really special. Add a tiny drizzle of neutral oil to a skillet and spread out the mortadella on the skillet over medium heat. Let it sizzle!

Once the mortadella starts to cook, stack all the pieces together. Let this cook for a few minutes and the “bologna” will get crispy on the bottom which is texture heaven in a sandwich.

Once you flip the stack, add a little grated Gruyere or swiss cheese to it. You don’t need much but it adds some nice flavor and texture to the sandwich. Who doesn’t love melted cheese right?

The real trick to this sandwich is the olive tapenade for it. I made a quick cheater version which was just store-bought pesto stirred together with chopped kalamata and green olives. It has an awesome garlicky and herby flavor and good salty flavors from the olives. This is really important as it balances out the creaminess of the mortadella and cheese.

Once the cheese is melted on your mortadella, slide it onto some toasted bread and pile on the olive tapenade. You could add some slices of tomato if you wanted, but I thought it was pretty good just like this!

It’s actually a simple sandwich with just a few ingredients but the flavors and textures are really great.

I would definitely call it a better bologna sandwich! 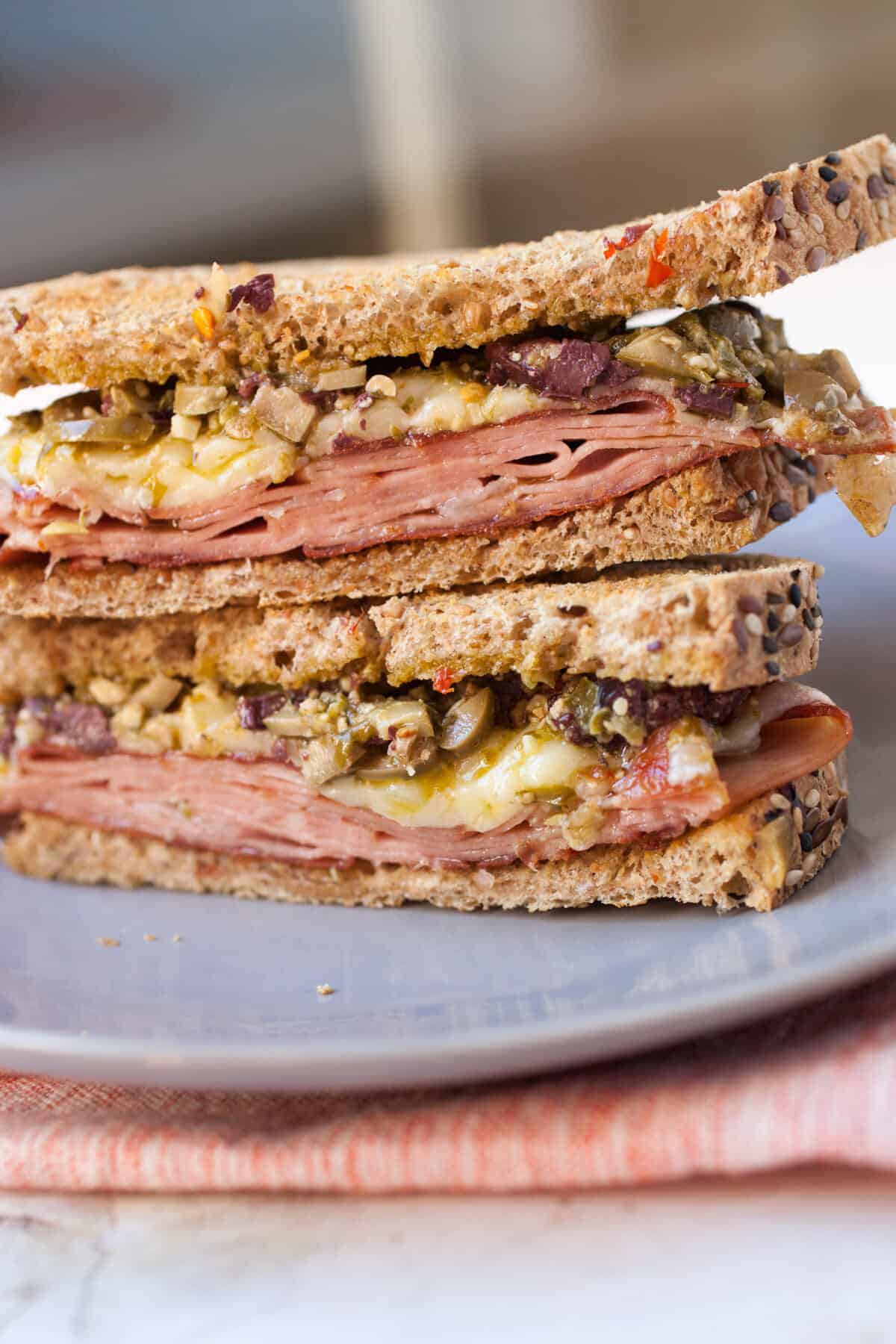 4 Responses to “A Better Bologna Sandwich” Leave a comment