You guys really were speaking my language this week in the reader poll. You voted for something with beer in it which seems very appropriate given that it’s football season.

The nice thing about this Beer Cheese Dip recipe (besides that it’s some sort of crazy mash up between beer and queso) is that it only requires one beer so you’ll have five (or 11 or 29) left over to consume!

You could serve this Beer Cheese Dip (quesale) with a wide variety of things. Chips would be good, but I think hard pretzels are best.

Quick, easy to make and seriously addicting. Perfect for a delicious party snack! I like to call it by its mashed up name: Quesale.

1) Pour ale beer into a large cup and stir to remove as much carbonation as possible.

2) In a medium pot over medium heat, add butter and melt. Once melted, add flour and whisk to combine. Cook for 2-3 minutes until roux turns a light tan color.

3) Slowly whisk in beer. It should thicken almost immediately as you whisk it in. If it’s a little watery, continue to cook the sauce until it is the consistency of a light gravy. It shouldn’t take more than a few minutes.

4) Add cheese and whisk until melted. Season with salt and hot sauce.

5) Pour into a large bowl and garnish with finely chopped scallions. Serve immediately with hard pretzels.

The base of this dip is a simple roux (cooked flour and butter), but then it veers pretty seriously from a traditional queso dip. While normally queso would whisk in dairy, like milk or cream, into the roux, I opted for beer.

There are a couple things to note if you are using beer for something like this. First, do NOT use a very hoppy beer. It will very much over-power the other flavors. Go for a nice mellow lager or brown ale. You don’t want anything really bitter. (I kind of screwed this up.)

Second, carbonation is not your friend. It’ll make the sauce harder to whisk because it’ll create a bubbly mess. So the first thing you should do is pour your beer into a large cup and stir it a few times to remove as much carbonation as possible.

When it comes to the cheese for this dip, I used a nice cheddar, but honestly you could get away with almost any cheese as long as it has some flavor and melts well.

Cheddar is a good bet though!

Now let’s get to the fun part…

Once you get the hang of making a roux, you can whip one together very quickly, but the first time you do it, it can be a little intimidating.

Start by putting a medium pot over medium heat. Melt the butter and then whisk in the flour until it’s smooth. It will bubble and start to turn a light tan color after a few minutes which means it’s ready to go.

Then you just start slowly whisking in the beer.

Here’s my best version of a whisking action shot.

Pour the beer slowly and whisk constantly so no lumps form in the pot.

When all the beer is whisked in, the mixture should be like a light gravy. If it’s very thin, return it to the heat for a few minutes and it should continue to thicken.

Once it’s the right consistency (light gravy) stir in the grated cheese!

When the cheese is completely melted, season the dip with salt and a good amount of hot sauce.

Then serve it up with some chopped scallions and lots of pretzels!

This dip was seriously addicting, but I found my version to be a bit too bitter because I used an IPA which I wouldn’t recommend.

Grab a nice brown ale or something and make this for your next game day. 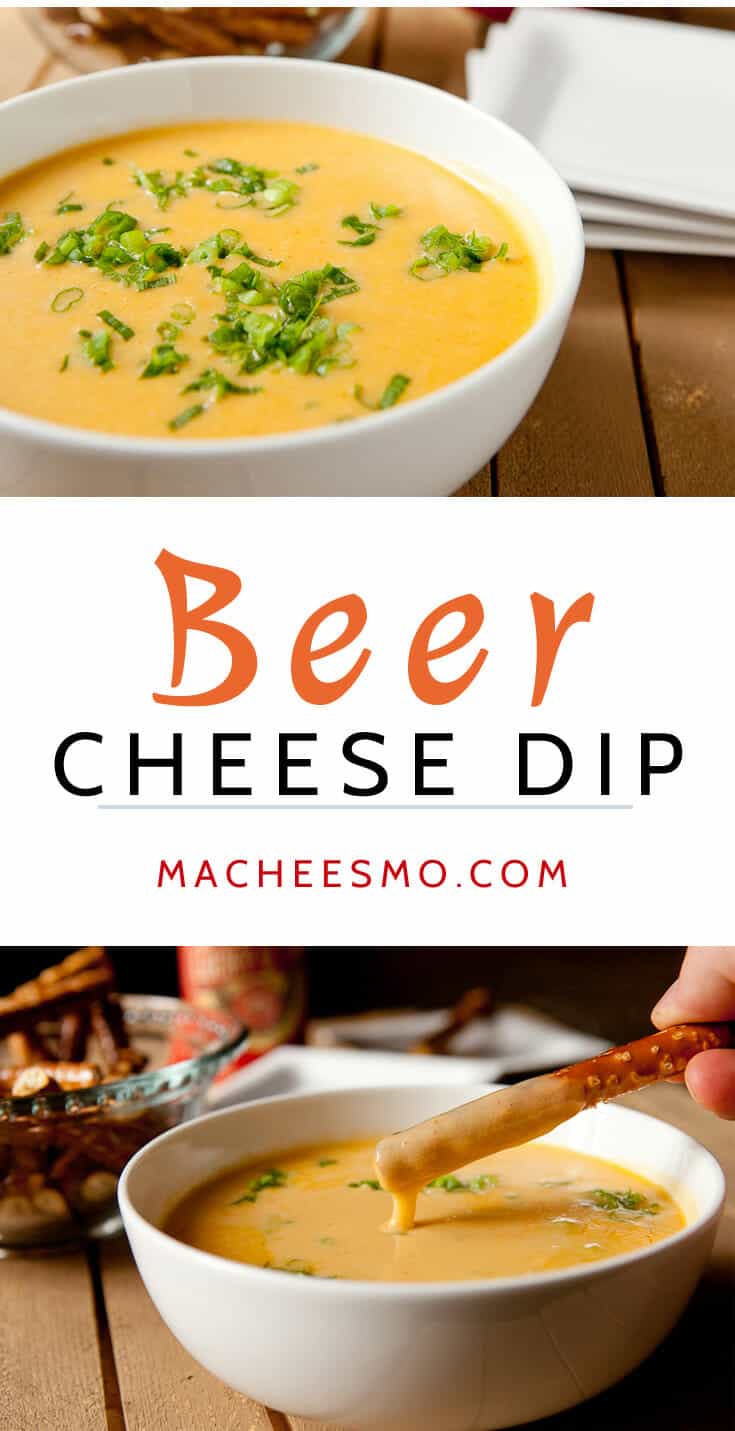