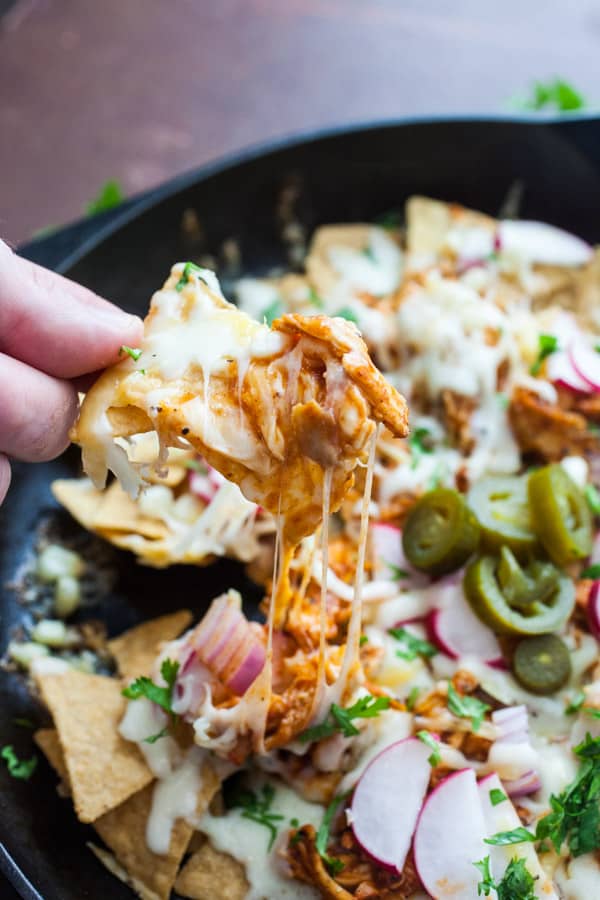 It’s no secret that Tex-Mex is way up there on my (and Betsy’s) list of favorite cuisines. I mean how can you go wrong? It’s spicy and cheesy and generally quick to make. Sometimes though I get a bit bored with the standard stuff (Betsy doesn’t). I’ve made some other types of nachos in the past but these Easy BBQ Chickeen Nachos are a huge hit, especially now that it’s back-to-school season and dinner time is short.

I really loved the BBQ sauce I made for this recipe. I’m not a huge fan of really ketchup-heavy BBQ sauces which means I generally don’t like store-bought BBQ sauces (except for a few that I think are really good like Stubbs). You could make this recipe really easy just by using your favorite store-bought sauce, but making your own BBQ can be really fun.

To make this BBQ Chicken Nachos weeknight-friendly, use a rotisserie chicken and your favorite store-bought BBQ sauce and the whole thing comes together in under 30 minutes. BOOM.

Sometimes I’m feeling ambitious and I’ll make my own BBQ sauce for this recipe. That’s fun if you have the time and I included a really basic version in the recipe below, but for quick dinners, using a store-bought sauce is A-okay in my book.

The easiest way to cook the chicken for this dish is just to poach it in some softly simmering water. Get a big pot of water boiling and add a few pinches of salt. Once it’s simmering, add the chicken and cook, covered, for about 15 minutes or until the chicken is completely cooked through.

The good news about poaching chicken like this is that it’s basically impossible to overcook it. It’ll be nice and tender no matter what. Once it’s done, let the chicken cool for a bit before trying to handle it. Again, you can use a rotisserie chicken and shred it for even easier nacho prep.

As an aside, this chicken could be used for a number of things besides nachos (which is good because you’ll probably have leftovers). You could make these BBQ Chicken Sloppy Joes with it or these crispy shredded chicken tacos… you get the idea.

If you’re making nachos though, just spread out a bunch of tortilla chips on a sheet pan or in a large cast iron skillet and fork on a good amount of the BBQ chicken.

What kind of cheese to use on BBQ Nachos?

Beyond cheese, I also sprinkled on some diced red onions and sweet corn to give it some bite. There are, of course, a huge range of toppings you could try out on these BBQ Chicken nachos. Here’s a list of ideas!

Betsy and I ate these BBQ Chicken Nachos without any toppings other than the cilantro at first and I thought they were really good but toppings always improve nachos. So, go crazy!

Since the chicken is already cooked, just bake these guys at 350 degrees until the cheese melts. Should take about 15 minutes. Then sprinkle on some chopped cilantro and any other toppings you fancy.

If you were really in a pinch, I do think you could add these toppings in my master microwave nachos recipe and it would end up just fine.

At the end of the day, this is a really flexible dish that is almost guaranteed to make some really good BBQ Chicken nachos, even on a weeknight. Do me a favor though and at least try to whip up some of your own BBQ sauce. You won’t be disappointed and might never go back to the bottled stuff.

Making these nachos in advance

Generally, I’m not one for making nachos in advance. They are best right out of the oven. That said, almost all of the nacho toppings can be made in advance, including the BBQ chicken topping! Get that all cooked and store it in the fridge for a few days.

Then when it’s time to make nachos, spread some chips out on your baking sheet or skillet and top to your desire. It’ll be much faster since the chicken topping is already cooked and ready to go.

So many shortcuts are possible to make these nachos easy for a weeknight recipe. Use a rotisserie chicken if you want and a good quality BBQ sauce to toss everything together in under 30 minutes.

1) To make the BBQ sauce, grate the onion over the big holes in a box grater.  Also, dice the pepper and garlic.

2) Add oil to medium saucepan over medium-high heat and, when hot, add the onions, peppers, and garlic.  Cook for a few minutes until soft.

3) Add other BBQ ingredients and simmer on low until thick.  Adjust to your tastes.

4) Meanwhile, poach chicken in lightly simmering water for 15 minutes until cooked through and tender.

5) Remove chicken from water and let cool.  Then use two forks to shred the chicken.

6) Add the shredded chicken to the BBQ sauce and combine well.

7) Cover a baking sheet or large skillet with tortilla chips.  Then top with the BBQ chicken mixture.  Top with shredded cheese and sliced red onions and corn.

8) Bake at 350 degrees until cheese is melted, probably 15 minutes.

9) Top with any addtional toppings and serve immediately!

Here are a few other great recipes for you!