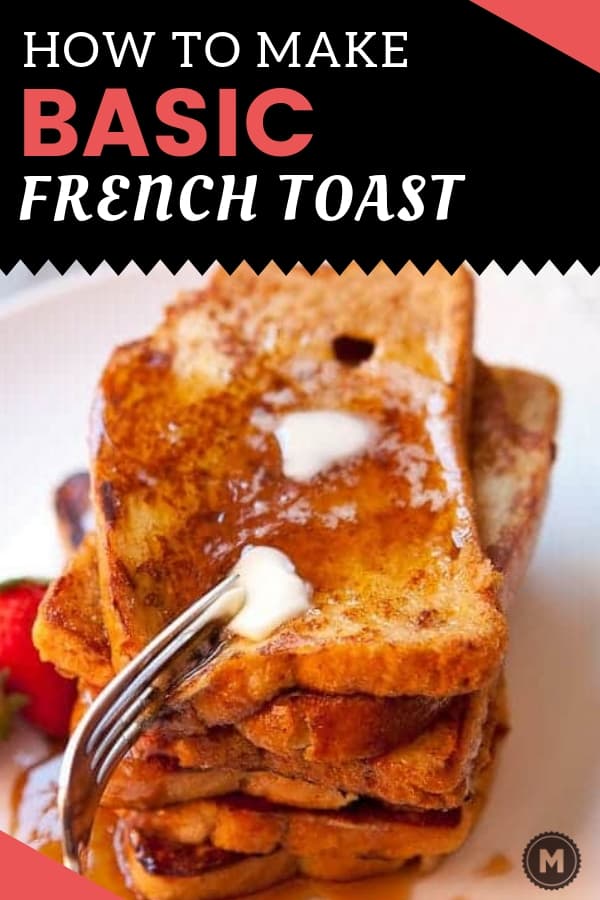 There is a lot of fancy in the food blog world (and on the Internet in general). If you’ve ever done a search on a site like Pinterest, you’ll know what I mean. But good food can also be simple, like this Basic French Toast Recipe. I call it my NO FUSS version of the classic breakfast dish.

After all, where do people get time for all the fancy? It’s cool to look at a work of art, but then when you try to recreate said work of art you most of the time end up with massive failures (speaking from personal experience).

So I wanted to take a step back from the super-hyper world of recipes and instead provide a classic simple french toast recipe. Could I have turned this into MILLIONAIRE CARAMEL APPLE PUMPKIN FRENCH TOAST?

Probably, but sometimes you just want a no frills piece of French Toast that tastes good without all the fluff.

A delicious but basic french toast recipe that can be used for almost any kind of bread. I call it no fuss french toast!

1) If your bread isn’t stale, toasted it in a 300 degree oven for 5-6 minutes to dry it out. You don’t want it actually toasted, just dry.

2) In a wide, shallow dish, whisk together milk, eggs, vanilla, cinnamon, and a pinch of salt.

3) Heat a large skillet or griddle over medium heat. Once hot, melt a small amount of butter in the pan and spread it around.

4) Working with one piece of bread at a time, dip it in the custard mixture and let it soak for a few seconds. Then transfer to the hot skillet or griddle.

How to Make Basic French Toast

Again, fancy french toasts are all over and sometimes they have fancy breads. The nice thing about this recipe is that you can use pretty much any bread you want. It’ll work. If you want to get fancy and use brioche or challah, feel free!

But, you can also just use plain old white sandwich bread which brings back memories of my youth.

Whatever bread you use, do make sure it’s pretty stale. If you need to, dry it out in a 300 degree oven for a few minutes before making the recipe.

The Custard Base for French Toast

The base of any good French toast is a simple custard. Mix together some eggs and milk and you are well on your way. At the expense of making this slightly fancy, I also recommend adding cinnamon and vanilla extract.

If you don’t have cinnamon OR vanilla in your pantry, then you probably need to go to the store. Harsh truth.

Whisk all that business together with a pinch of salt.

This is not hard.

When you’re ready to cook the French toast, dip the toast in the custard for a few seconds so it soaks up and then transfer it to your skillet or griddle.

A lot of French toast recipes will have sugar in the custard. I recommend skipping that.

Instead, when you’re cooking the French toast (over medium heat, in butter), sprinkle a tiny layer of sugar on the bread. When you flip the french toast, the sugar will caramelize a bit and make a delicious crust on the French toast.

How Long to Cook French Toast

Cook the French toast over medium heat for a few minutes per side until the bread is nicely browned on the outsides and there isn’t any raw custard on the inside.

Of course, this timing will change if you use different breads. Ultimately you might have to cut into a piece to make sure it’s cooked through and the custard part is set. I can’t imagine that any french toast would need to cook for more than 4 minutes per side though.

These are way more flexible than pancakes in my opinion. You can flip them a few times without too much worry and poke at them to see if they are cooked through or not.

After the basic French toast is cooked, pile it high and deep and put just enough butter on top to create a little butter puddle.

You want the butter puddle.

You almost certainly have everything you need to make this Basic French Toast.

If you’re having a dreary start to the week, there’s no reason not to make really simple homemade French toast.

Leave the fancy to the professionals.

Here are a few other French Toast Recipes in case you DO want to fancy it up!

11 Responses to “No Fuss Basic French Toast” Leave a comment