Every month in 2009, I am writing a post detailing some specific things about food in the upcoming month.

I can’t believe it’s already August. What the heck is happening to 2009? It feels like it’s evaporating.

I’m a few days late in posting my food letter for the month. I’ve been too focused on Macheesmo Boss Sauce! August is prime time for a lot of foods obviously and you would be doing yourself a huge injustice if you have access to a farmer’s market and you don’t take a stroll through it a few times this month.

What to Eat in August

Plums – I had some great pluots last week at the farmer’s market. Very juicy and perfectly ripe. Now’s the time to eat these guys and here are some things you can do with them.

Brown Sugar Plum Cakes – Brown sugar is maybe my favorite ingredient ever and pairing it with plums just kind of makes sense. (@ baking and books)
Summer Grill Mix Including Plums – An awesome summer medley on the grill with chicken, squash, and yes, plums. (@ cook think)
Roasted Plums with Tarragon Ice Cream – Ok. So these are amazing photos, but I would bet that it tastes darn good also. (@ Cannelle et Vanille)
Plums in Chocolate – So these are prunes, not plums. And yes I consider them entirely separate things. Still, this is an interesting use. (@ Real Epicurean)

Cucumbers – Cucumbers are in season for many months, but you should have no problem finding really fresh, crisp, and cheap cucumbers in August.

Cucumber Couscous Salad – I made this salad a while ago, but the cucumber really pops in it.
Spicy Asian Cucumber Salad – I like spicy things. I like cucumbers. I think I might just like this! (@ Please Pass the Pie)
Cucumber Hibiscus Cocktail – I really like cucumber in cocktails. It pairs wonderfully with gin which this recipe uses. (@ Garrett’s Table)
Tomato-Cucumber Gazpacho – These guys know tomatoes. They were recently in the Washington Post, but this combination of tomatoes and cucumbers looks awesome. (@ The Bitten Word) 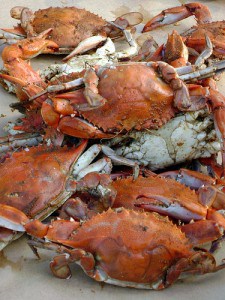 Crabs – I already have at least one crab shack outing scheduled in August. If you are in a crab-accessible area, now’s the time!

Crap Dip Appetizer – Ok this is actually three appetizers I made. But the crab dip might be the best out of the three.
Cleaning Soft Shells – I haven’t used soft shell crabs ever, possibly because the cleaning seemed intimidating. While a bit graphic, this write up is awesome at explaining it! (@ Cook)
Blue Crab Boil – There isn’t much I can say about the crab feast other than that it is amazing. If you are ever get the chance to have a real crab shack experience, it’s pretty awesome. Or you could try it at home! (@ Mike’s Table)

Other August Business. Here’s a few other things you may want to mark down about August.

Peach Month. August is peach month apparently, which means that you should be making an awesome peach pie. Or maybe some simple grilled peaches. This should be a pretty easy month to celebrate.

Aug. 14 – National Creamsicle Day – Kind of random, but who doesn’t love a good creamsicle! Obviously, you could buy some or maybe make some!

Photos by Anushruti RK and JasonTromm.