Ask the Readers: What’s Your Weakness?

Over the weekend Betsy and I were watching some basketball and a commercial for the new Taco Bell taco made out of Doritos came on.

I asked what what wrong.

I knew exactly what she meant. The food geniuses over at Taco Bell had somehow looked deep inside her soul and found the perfect mix of foods that would be irresistible.

There are sometimes foods that we try to avoid, usually for health reasons, that we simply can’t.

I have more of these than I would like to admit so I thought it would be fun to write a post about them and also discuss some strategies for dealing with them!

Before we can even begin to discuss ways to fend off food cravings, it’s important to realize why they are happening.  In fact, if you are able to identify the cause of your craving, that’s a large part of the battle.

Here’s a few causes of your cravings.

If you completely eliminate something from your diet after eating it for a while, you’re going to crave it.  It has been my experience that people who try this usually fail unless they have a very compelling reason to succeed.

Eating out of Habit

Sometimes schedules will lead you to want certain foods.

My biggest example of this is coffee.  Even if I drink decaf coffee, having a cup in the morning is pretty integral to my daily survival.  It’s not even the caffeine for me, it’s the ritual.

This is similar to the above point but doesn’t have to be based on schedule.  Take a stroll by a movie theater and you’ll probably want popcorn.  If I watch a movie at 9AM I still want popcorn even if I would never think about eating popcorn at 9AM normally.

Not all Cravings are Bad

Cravings are a natural way for your body to tell you it needs something.  Being thirsty is technically a craving and one that I don’t suggest you try to fight!

Of course the hard part is identifying whether a craving is good or bad!

The food industry today is a billion dollar machine that is specifically geared to create (and satiate) cravings.

There are thousands of scientists not only analyzing what people like but also what types of foods create cravings.

Do you think it just magically popped in some dude’s head to smash together a Taco Bell taco with Doritos?  Absolutely not.  I’m sure they did tons of research crossing consumer groups and found a way to double up on cravings so they could create a product that is almost impossible to resist for some people.

I’m not saying that these food makers are necessarily doing bad work (although I think some of them are), but I do think it’s important for consumers to know what’s going on!

It wouldn’t be fair to just talk about my wife’s cravings or ask you all to share your cravings without first listing mine.

Salty/Crunchy – I love anything salty and crunchy.  Any kind of chip or salty snack is going to be hard for me to fend off.

Ice Cream – I actually don’t have a sweet tooth but ice cream is an exception.  I love the stuff and can eat a bunch of it.  It was a bit embarrassing to admit in a comment a few days ago that I can easily eat a quart in a few days.

Beer – I don’t crave being drunk mind you… but I do love beer. I love trying new ones and love the complex flavors that brewers can create with just a few ingredients.

Coke – This is actually a rare one for me, but sometimes I crave Coca-Cola.  Not Pepsi or any other brand.  Just Coke.  This is obviously some crazy psychological crap, but it’s still impossible for me to defeat all the time.

Peanut Butter and Jelly – Some people grow out of the PB&J thing.  Not me. I still eat at least one a week.  It has to be smooth peanut butter and grape jelly. 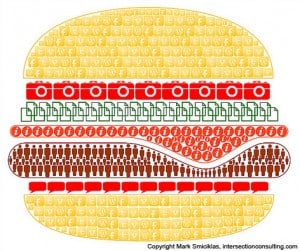 Even though I’m writing this post about cravings and food weaknesses, Betsy and I actually do a pretty good job at winning these wars.  We generally eat home-cooked meals and snacks and stay pretty healthy.

These strategies might not work for everyone, but this is what we try to do.

If you don’t know what your cravings are, it’s pretty hard to fight them. Make a list (even if it’s mental) for the things that you like to eat.  Talk about it with others also. Just by knowing it and talking about it, you will become more accountable.

I think it’s really important to give into cravings on occasion.  For me, if I don’t do this then I’ll just completely fetishize the thing.  I don’t even drink a coke every day (I might have one a week), but I don’t beat myself up over it when I do have one.  I just enjoy it for what it is.

Out of House Out of Mind

For stuff that Betsy and I crave, we don’t buy it at the store except for very special occasions.  If it’s in the house, we will eat it, but if it’s not, we will rarely venture out to get it.  Since I do the grocery shopping, I just don’t buy the stuff.

Don’t kid yourself by saying that you are going to buy it and then ration it out.  That never works.

This is a true story.  For a while I would eat a very hearty salad for lunch every day (one with hummus, tons of veggies, etc.).  This salad is super-filling and would leave me energized for the rest of the day.  After even a week or two of that, I would absolutely crave my big lunch salad if I didn’t have it.

What are your Weaknesses?

Do you have certain foods that you have a hard time saying no to even if you know they are unhealthy?

Are there certain food products that seem custom-made for you?

What strategies do you use to fend off this crap?

39 Responses to “Ask the Readers: What’s Your Weakness?” Leave a comment