I recently had a conversation with a friend that went something like this:

Friend: I’m really dreading going over to my Aunt’s house this weekend.
Me: Why’s that?
Friend: Because she always makes this completely gross meal that I hate.
Me: How bad could it be?
Friend: Super bad.
Me: Well… you probably just have to suck it up. Fill up on sides!

My advice was that he basically had to eat it and couldn’t say anything about it. It was a meal she had made for years and took a lot of pride in it. It was clearly an important meal for her for one reason or another and it probably wasn’t worth it to cause a fuss.

That got me thinking though… when is it okay to refuse a meal or offer suggestions for improvement?

When do you just have to suck it up and eat something you don’t love? 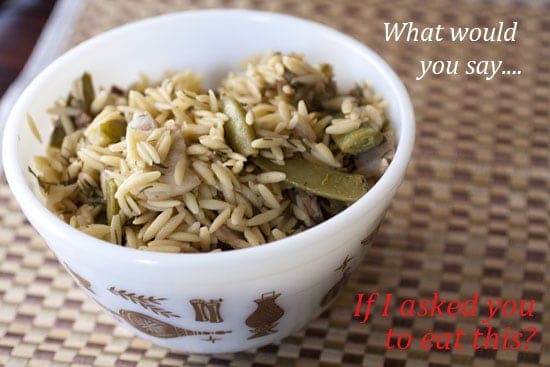 The thing I try to remember when I come across a bad meal is that cooking meals for people is a very personal thing and people react in different ways to it. Whether you are criticizing a professional chef who cooks for people daily or your grandmother who cooks only once a year, be gentle and remember that they are just trying to make people happy.

That said, here are some general rules I tend to follow.

If you paid for it, you can say something

If you paid for a meal in a restaurant, and the meal wasn’t what you were expecting, it’s okay to say something.

But, you can very politely have your server give feedback to the kitchen. Maybe it was too dry or too salty. Most good chefs will take the criticism to heart and try to fix the problem.

Also, be sure to peg your expectations to the level of restaurant you are in. Don’t expect an impeccable chicken cordon blue from your local Applebee’s.

If the meal is absolutely horrible and you can’t eat it, then it’s fine to ask for something else. For me, it has to be pretty bad to do this. I’ve probably done it less than ten times in my life.

If you have a food allergy or if you notice something is possibly dangerous about a dish, you should say something.

Some things that I’ll quickly point out is raw chicken, if something smells spoiled, or cross contamination.

I don’t care if it’s your dear grandmother and she slaved away for hours.

It ain’t worth Salmonella!

If the person is a regular cook, it’s okay to give suggestions

As someone who cooks for people frequently, I rely on honest feedback on dishes. It would be truly horrible if people just said everything I made was excellent. First, I know they would be lying because I fail a lot. Second, it wouldn’t help me improve the recipes which is always my goal.

Most people who cook regularly are used to failing and know that things can go wrong in the kitchen.

If you approach the situation with tact you can usually make suggestions or give feedback.

What you shouldn’t say: OMG Craig. This meal is freakin’ the worst.

What you could say: You know Craig, I had a dish very similar to this awhile ago. It had some fresh veggies in it and I think the chicken was grilled instead of boiled. I’ll send you the recipe if you want to give it a shot.

If the person isn’t a regular cook, it’s okay to give suggestions

This might be shocking, but even if the person doesn’t cook much, it’s still okay to give suggestions.

After all, if the person never gets any honest feedback, how will they ever get better?

The key, in this case, is to not overwhelm them with suggestions. Just give one or two things they could change.

When you should keep your trap shut!

As you can tell, there are a lot of times when I think it’s okay to mention polite suggestions about recipes. After all, that’s how we all get better at cooking!

Plus, if someone really thinks that everything they cook is magically, perfectly delicious, they need to have their bell rung.

But there are some times when it is 100% not worth it to mention anything about the dish.

If the dish is a tradition and is made every year by someone in your family, just let it happen. The dish probably means a lot to that person and it’s probably not worth rocking the boat.

If you don’t know the person well, you probably shouldn’t be critical. It’s just not a super-great way to make friends. You don’t want to be the dude always criticizing people’s queso dip.

When Do You Say Something?

I know people have a lot of different feelings on this subject. I’ve talked to people who think you should always be polite and never critical when someone makes a meal for you.

What do you think? Do you ever give honest feedback about meals or do you just grin and bear it? Leave a comment!

Nick's Picks: Meals to Cook While on Quarantine