This post is sponsored by Woodwork Wine. They have a few great wines coming out this season, but I personally love their Cabernet Sauvignon. It pairs really well with meaty dishes (or sturdy veggies like these mushrooms). Be sure to check out the end of this post for a really fun giveaway (SPOILER: WINE!).

A few months ago I was approached by a wine maker that I’d never personally heard of before called Woodwork Wine. They wanted some help developing recipes that paired well with their wines and after I saw what they were working on (and tasted my fair share of their delicious wine), I couldn’t wait to work with them.

I’m very far from a wine snob and I think that’s why we hit it off. They make a really delicious wine, but it’s still approachable. I see it as the kind of wine I would be fine with drinking during a football game but also would serve to my wife’s mom.

The kit I helped them plan is one of the coolest things I’ve worked on and while it’s actually not available for sale, they gave me one to give away to you all!

Oh and also: ARTICHOKE STUFFED MUSHROOMS! On the grill even…. with artichokes and sun-dried tomatoes. Appetizer? Sure. Meal? Yep.

Portobello mushrooms stuffed with artichokes and sun-dried tomatoes and grilled to perfection. A great appetizer for any party!

1) Prepare your grill for indirect heat grilling. If you’re using charcoal, heat enough coals for one hour of cooking. Push the coals to one side of the grill.

If you’re using gas, turn on one burner on medium-low (either the far side or the back burner of the grill depending on your model).

2) Scrub mushrooms well. Use a paring knife to hollow out the center of each mushroom. Be careful not to cut through the mushrooms. Drizzle mushrooms well with olive oil on all sides.

3) In a medium bowl, stir together red onions, chopped artichoke hearts, sun-dried tomatoes, and grated cheese. Season mixture with a pinch of salt and pepper.

4) When ready to grill, place mushrooms (unstuffed) stem-side down over direct heat. Grill for 1 minute until mushrooms have nice grill marks.

5) Flip mushrooms and transfer to an indirect heat area of the grill. Spoon filling into each mushroom. Go heavy on the filling. It’s okay if you lose some, but you should use it all.

6) Sprinkle each mushroom with breadcrumbs and cook for 20 minutes, covered, over indirect heat. Rotate the mushrooms once halfway through to make sure they are cooking evenly.

Mushrooms are done when the mushroom is tender and the cheese is melted in the filling. Serve mushrooms while warm.

OPTIONAL: If you don’t feel like firing up the grill, you can assemble the mushrooms and bake them at 350 degrees F. for 25-30 minutes.

Personally though… that’s a bit too much work. I’m happy with the big ones. You can cut them up easily if you’re serving them as an appetizer, they hold together better on the grill, and are just easier to work with.

I recommend using a paring knife to cut out the stems and some of the softer flesh around the bottom of the mushrooms. Then sprinkle them with a good drizzle of olive oil and season them well with salt and pepper. Five minutes of prep and these are ready to go.

Mushrooms have big flavor. They are definitely the meat of the veggie world and that’s why they pair really well with big hearty wines like cabernet sauvignons.

You wouldn’t want to use a light filling for these. You want big flavors. This filling with artichokes, red onion, and sun-dried tomato is about as big as it gets.

I mixed in a little sharp white cheddar also because why not?

I’m sort of hanging onto the last solid days of grilling here. I’ll grill when there’s snow on the ground. Watch me!

If you’re not in the mood to grill though, these are great in the oven. Stuff them full and bake them at 350 degrees F. for about 30 minutes and you’ll love them.

If you are using a grill though, prep your grill with a direct heat and indirect heat zone. For charcoal that means move your coals to one side. For gas that means turn on one side of the burners but leave one side off.

Start the mushrooms stem-side down without any filling over the hot section of the grill. It’ll hiss and yell, but it’s good.

Let those cook for a few minutes and then flip them onto the indirect heat side. Then stuff them with the filling. I mean really pile it on! Add a sprinkle of breadcrumbs to the top if ya want.

Cover these and cook them for 15-20 minutes over indirect heat. You’ll probably need to rotate them once during cooking to make sure they are cooking evenly.

The finished mushrooms are great as a meal with a good salad or as an appetizer. Who doesn’t love a good stuffed mushroom?! 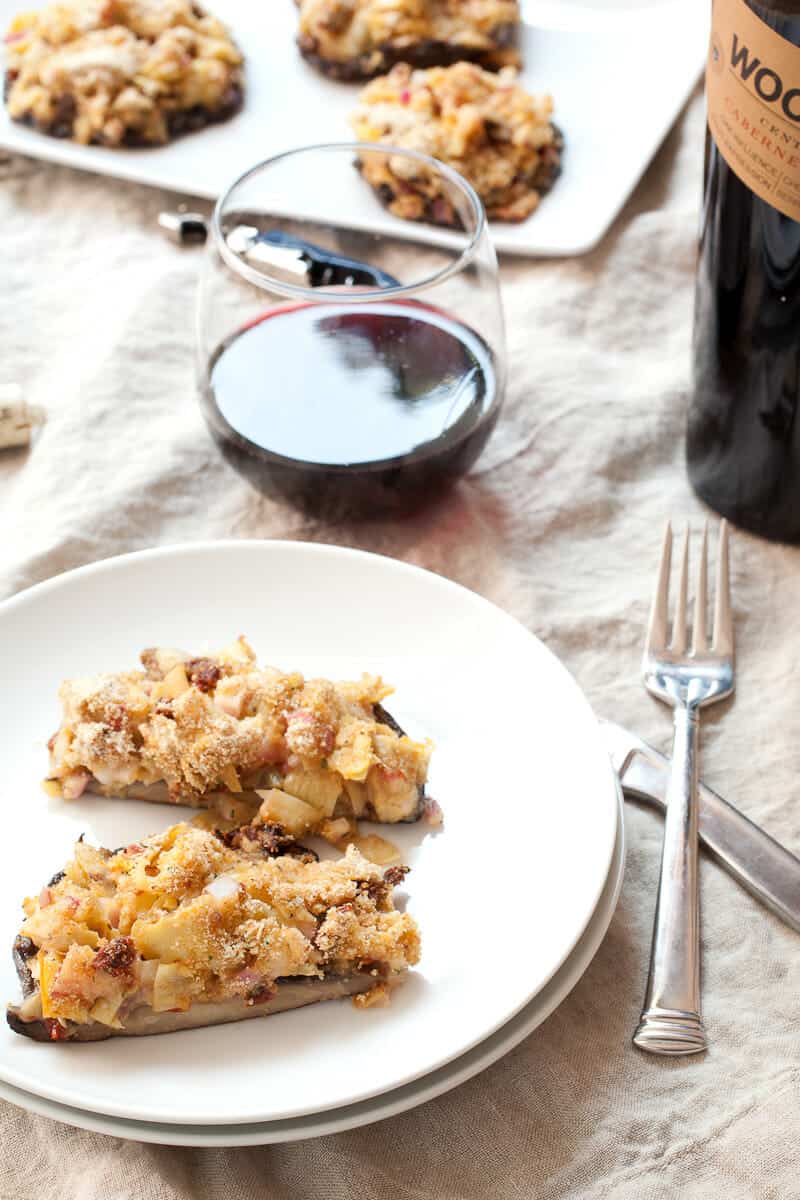 Woodwork Wine developed a fun new way to show off their 2013 Cabernet Sauvignon. They sent it out to a select list of people in a custom build cedar box. The cool thing? The box can actually be used as a grilling plank!

The cooler thing? I came up with the recipes that were included in the box to pair with the wine and one recipe to use with the cedar plank!

You cannot buy these boxes. There are a very limited number of them but I have ONE to giveaway to a reader! WOOHOO! Free wine right?!

To enter the giveaway, you must be 21 years old (and you’ll have to sign for the delivery) and you must be in the United States. Next Monday, 11/16, I’ll choose one winner at random to win the box! The box includes a bottle of 2013 Woodwork Cabernet Sauvignon, a recipe booklet, and a custom spice blend!

Use the below widget to enter the giveaway, or you can always just leave a comment to be entered to win!

43 Responses to “Stuffed and Grilled Mushrooms” Leave a comment